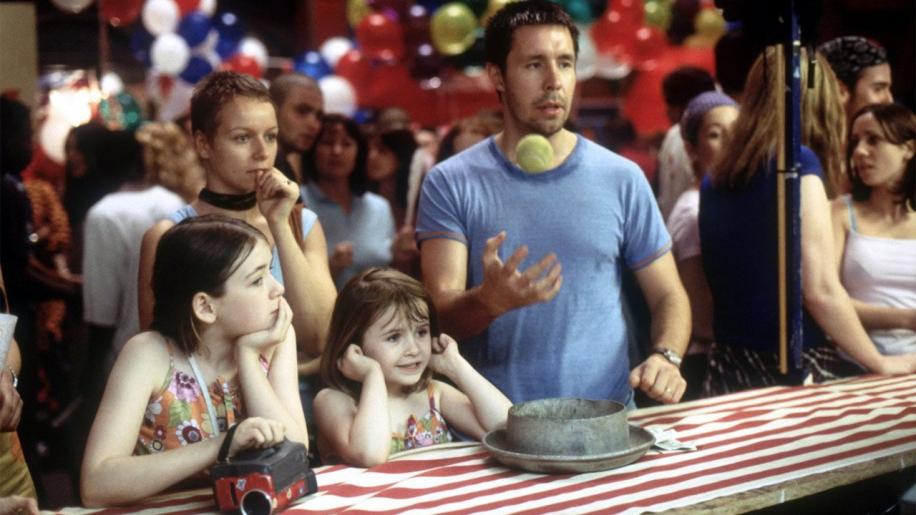 Director Jim Sheridan (The Boxer, In The Name Of The Father, The Field, My Left Foot) takes us on an emotional rollercoaster ride as he weaves together a heartfelt, semi-autobiographical story of love, sadness and a family's struggle to come to terms with tragedy. Arriving in America with barely enough money to feed his wife and two daughters, Johnny, Paddy Considine, finds that life across the lake can be just as cruel and tough as back home in Ireland. Indeed they soon learn that Manhattan's heat wave has the ability to deplete the reserves of the most determined fighters.

With a sickly wife, Samantha Morton, a dilapidated apartment in an hostile tenement block and no money for even the merest niceties, Johnny forces aside his personal demons whilst striving to keep his dream of becoming an actor alive - despite failed audition after failed audition. Slowly, Johnny begins to realise that he cannot simply leave behind personal tragedy as simply as leaving his country... some things need to be met head on. And when his daughters befriend Mateo, a strange but charming neighbour, Johnny begins to wonder if his place as family provider is being usurped.

I enjoyed watching In America, not least because of the clever theme that runs the length of the movie - are their difficulties compounded by unconscious forces? And is there really an angel watching over Johnny's family, making sure things don't get completely out of hand? I liked the fact that these questions are addressed, and for me this really brings to the fore Jim Sheridan's talents as writer and director. The cover of the DVD boasts the fact that the movie secured three Academy Award Nominations - for Best Actress, Best Supporting Actor and Best Screenplay - and I can see why. It has a kind of warm charm that, despite being a touch overly schmaltzy at times, still managed to make me shed a few tears. OK, I'll come clean. I found myself sobbing with sadness and joy in roughly equal measure, which I can assure you is no mean achievement for any movie!