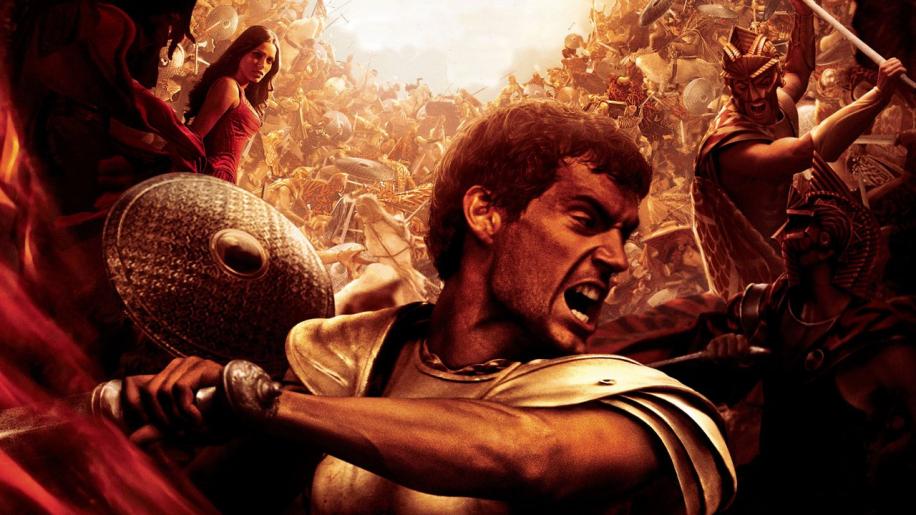 Question: if you are immortal, how can you die?

I remember studying Greek mythology at school.  I have fond memories of imagining the various Gods and Mortals, the deeds they performed and fantasies they lived; indeed I never subscribed to anything other than what they where – fantastical adventures, myths and legend.  Very few films have ever managed to capture that sense of fantasy with the exception of any of the Ray Harryhausen stop motion films; there was a filmmaker who knew his fantasy!  But recently it seems reality is the way to go, look at Nolan’s Batman for a prime example.  But when ascribing reality to fantasy something gets lost.  Wolfgang Petersen’s Troy is a typical example; by removing all the fantastic elements you are left with nothing more than warring tribes, and whilst the Director’s Cut is a very watchable and enjoyable film there is none of that myth that make the legends so fanciful.  Of course there is the argument to be made that each retelling of any of the myths incorporates the storytellers own slant, or interpretation, thus Petersen’s fantasy-less story has equal merit when side by side with Homer’s more elaborate inspiration.  However, I feel a fantasy story require a fantasy element, which is why Harryhausen’s films work so very well.  Tonight’s feature takes a very middle ground with regards to it’s retelling, if indeed it can be classed as a retelling.  It uses names and places of the Greek myths, but drastically changes their motivations and place within established ‘history’ crafting a story that tries to set itself apart by combining a sense of reality with mythical Gods; in much the same way as the abortive Clash of the Titans remake did.  With mention of that, you may be able to guess where this review will go....  Strap on your sandals, sharpen your spear and let us pray to the Gods for tonight’s feature presentation: Immortals in 3D.

As has become customary for the beginnings of fantasy type films we open with a prologue, in this case detailing the anomaly of the title, Immortals, as Gods can apparently kill one another and did so before the birth of man in a huge battle; the victors calling themselves ‘Gods’ and the vanquished, who were sealed in a prison below Mount Tartarus, ‘Titans’.  It was during this war that a bow, named the Epirus Bow, which was said to have unimaginable power, was lost.  Hyperion (in this incarnation a scarred mortal King and not a Titan) seeks the bow to free the imprisoned Titans as revenge towards the Gods because of the loss of his family.  The virgin oracle Phaedra foresees his victory in a vision, a victory that will plunge the world into darkness and chaos.  We have now been introduced to our main antagonist, Hyperion, played by Mickey Rourke, who throughout the film is ‘eeeviil’ with no redeeming characteristics – even new recruits to his army are scarred and castrated.  When he explains his fury with the Gods, he behaves like some mafia crime lord, always eating, barely looking at anyone in the eye; the supreme power he wields allows him carte blanche over the lives of all those around him, friend or foe.  Whilst I love Rourke’s comeback, this particular characterisation has little wit about it, even if his body frame excels as the put upon King.

But what of our protagonist?  In this case it’s Theseus, not the founder-King of Athens and demi-god of the myths, but the mortal outcast and bastard son of a rape victim, who has had the fortune to have been trained by Zeus himself in the art of swordsmanship and justice; this does make him an extremely competent, almost superhuman, fighter – skills he brings to bear against many enimies.  Henry Cavill gives life to the character in what appears to be a very near representation of his Charles Brandon role from the The Tudors, both having a strict moral code, both being excellent fighters and both having a winning charm.  He is portrayed as the hero through and through, even though it’s a bit of ‘greatness thrust upon him’ rather than earned – I liken it to fast-tracking Theseus past the Six Entrances to the Underworld; essentially Zeus places all his faith for mankind on this one mortal, giving him the will, but not the means, to defeat Hyperion; that he has to find for himself.  Indeed Zeus forbids his other Gods in Olympus from even helping him, or mankind in general, in the up and coming trial, believing that they must have faith in mankind.

The film is in part loosely based on Theseus and the Minotaur legend, and when I say loosely I mean it is a far, far distant cousin.  There is a ‘beast’ in the central portion of the film, but he is a mortal, albeit giant of a man, who wears bulls head armour.  He and Theseus do battle in an ancient tomb, which is itself a labyrinth (instead of a ball of yarn to find the exit, Theseus cuts his foot to leave a blood trail); i.e. that ‘reality’ portion of the film creeping through.  Apart from the imprisonment of the Titans at Mount Tartarus and the various character names, this is the only recognisable scene that has any resemblance to the Greek myths – the rest of the story, as played out, is a straight action/adventure.  Hyperion’s massive army invades Theseus' village and murders, or enslaves, everyone including Theseus’ mother who dies in front of Theseus’ eyes in spite of a valiant attempt to save her.  Later Hyperion lays siege to the great wall at Mount Tartarus, giving Theseus a terrific ‘rallying of the troops’ speech.  The battle sequence under the wall in the gated tunnel bears a striking resemblance to 300 (but then it would, this film is even advertised as ‘from the producers of 300’) and when the Titans are released (that can’t be a spoiler, they reveal it in the beginning of the film and the trailer) the Gods themselves descend and fight in a very human manner.  In fact there is a lot of fighting in this film, almost as if the makers thought of the number of fight scenes they wanted to have and constructed a film narrative to join them.  And I guess this is the crux of my problem with the film – it is extremely juvenile in its presentation; characters are flatter than one dimensional, their sole purpose being to get to the next fight scene.  And each fight scene tries to build upon its predecessor, becoming bolder, louder and more ridiculous – see Theseus ploughing through uncountable numbers of Hyperion’s forces; or the multiplying Titans leaping about as the outnumbered Gods smash them to pieces; or fighting ever harder even with mortal wounds – the whole thing becomes dull.  The utter lack of characterisation means you simply don’t care what happens to anyone, thus there is no peril or danger and each successive fight scene is another distraction before the end of the film.

But what really grates with me is that this film was directed by Tarsem Singh, whose 2006 film The Fall was a magnificent exercise in storytelling wonder; with rich (and real) characters linked by a wonderfully layered story narrative that juxtaposed fictional events with ‘real life’ actions and made for a genuinely moving story.  Indeed the story (or dream) portions of The Fall were filled with fantastical elements and enigmatic characters and, as such, if capitalising on such unique ideas, who better than Singh to helm a film about Greek Myths?  To draw on such a wealth of imagination about Gods, Titans and mortals locked in a struggle against each other in multiple planes and throughout time, surely anything is better than the flat narrative we ended up with.  I simply cannot understand how someone with such a colourful and creative mind can produce the single narrative, punch first, ask questions later drivel that Immortals has ended up being.  I don’t care that it has a very distinctive look, that it has a real finesse about the style it portrays if the story itself doesn't engage me because the characters are lifeless and dull.

It seems to me to be a shocking waste of talent, by abandoning any and all ‘myth’ Immortals has become a generic sword and sandals actioner, and really it needs to be so much more to stand out from the crowd – it certainly had the potential but sadly has fallen rather flat.  Disappointing.

It should be noted that the UK version of this Blu-ray has been cut by eighteen seconds, i.e. it is the same print that was released theatrically; the following information is taken direct from the BBFC's website detailing exactly what has been removed:

This work was cut. The cut(s) were made at the request of the distributor to achieve a particular category. To obtain this category cuts of 0m 18s were required., some or all of these cuts were substitutions. Details of cuts below may contain spoilers of plot details.

Company chose to make cuts to reduce violence in order to achieve a 15 classification. Cuts included removal of the bloody focus on a throat being cut, reducing the focus on young women dying, having been burnt, reducing the focus on eye gouging, removing the shot of a beheading, and reducing some focus on large splashes of blood resulting from characters being killed. Cuts were made in line with BBFC Guidelines and policy. An uncut 18 classification was available.