The only difference between this place and hell is gravity. 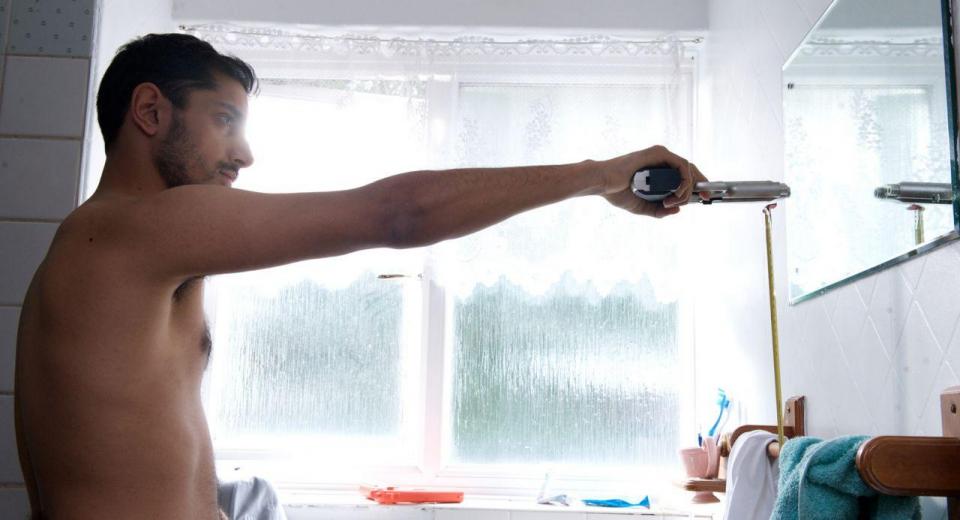 Ill Manors hits Region Free UK Blu-ray complete with a 1080p High Definition video presentation in the movie’s original theatrical aspect ratio of 1.85:1 widescreen. Considering the tiny budget of the feature, it looks surprisingly good, never even coming close to demo quality, but looking far better than what you would expect for £100,000. Indeed, there must have been a fair amount of work done in post-production to clean things up but, miraculously, it seems largely devoid of any overt signs of excessive DNR application. Detail is generally good, allowing us pretty accurate skin textures, sets and settings, and whilst fine object detail isn’t astounding, it is still far better than expected. The colour scheme is marginally stylised, and obviously in line with what you would expect from a Brit flick like this. It’s a grotty, gritty film, bathed in darkness for the most part, and yet the video presentation remains fairly clean and reasonably accurate throughout, certainly good enough to make for a decent watch. The aural accompaniment is similarly decent if unexceptional, a solid DTS-HD Master Audio 5.1 track which perfectly suits the material but struggles to make any kind of real impression. Dialogue comes across clearly and coherently throughout, from the almost persistent shouting to the painful screams, mainly emanating from across the frontal array. Indeed the majority of the aural accompaniment hits you with a front-heavy approach, with fairly limited surround and rear action, only really sparking up some energy and expanse during the musical moments. Indeed effects coverage is far from astounding, but there is certainly enough atmosphere generated to give you suitably realistic bustling streets and urban environment. Overall, with again the bass only coming forth noticeably during the song tracks, they truly provide the highlight – thankfully there are several tracks across the narrative, boosting the musical style. Decent but far from exceptional Despite the micro-budget of the main feature, there’s a whole plethora of extra features, all further highlighting the labour of love involved in the project. An audio commentary would have been much appreciated but, shy of that, we get plenty of worthy additions including, most notably, the original pilot short film which Ill Manors was based expanded from and the TED lecture that Plan B delivered upon neglected and misunderstood urban youth.

Making Ill Manors is little over a quarter of an hour in length and has contributions from most of the main cast and crew, chatting about their work on the project and their intentions behind it, although not having quite enough time to get too deep into the background.

There are a selection of short interviews with everybody from writer/director Plan B, stars Riz Ahmed and Ed Skrein, producer Atif Ghani and cinematographer Gary Shaw, offering up further brief insight into the production, the characters, the story, the filming and the overall project.

One of the best features on this disc is Plan B’s near half-hour TED Lecture on the mistreatment and mislabelling of youth, the derogatory nature of the word ‘chav’, his childhood experiences and his work trying to highlight the hidden promise than can be found in underprivileged, underappreciated kids – if you look for it. Whilst some of his ideas seem moderately over-simplistic, his message is genuine and powerful, and will certainly give you pause for thought.

Michelle is the original 18-minute Short Film that acted as something of a pilot for Ill Manors. It stars Adam Deacon in the lead role that would go to Riz Ahmed for Ill Manors, with Ed Skrein and Anouska Mond playing exactly the same parts. It follows exactly the same story as that part of the main feature, but the rap songs by Plan B are slightly different. Worth checking out.

Buziness Woman runs at 5 minutes and is much more music-dominated, acting as little more than a music video actually, with Plan B singing/narrating the story of a business woman wandering the streets of East London trying to get home. Again, featuring Adam Deacon and, again, fairly bleak and depressing, it is totally in-line with the main feature itself and well worth your time.

Pieces is another tough watch, a track by Plan B with a story following a guy whose ex-girlfriend decides to break into his flat and ruin it. I’ve no idea whether it was a personal piece on his behalf, but it certainly isn’t particularly pleasant to watch, despite the fact that the track itself is decent.

Ill Manors was produced before Plan B got funding to complete the film itself, and so the track’s music video is a montage of news video footage cleverly edited to illustrate his views over neo-snobbery and disaffected youth.

We get a selection of Deleted and Extended Scenes which were wisely trimmed or edited into some of the montages. It’s not that any of them are unworthy, but just that it’s a long film as it is, and some of these additions would have only dragged the runtime to an unbearable length. Seeing the pregnant girl kicked around by the gang worked better within a montage, and Kirby’s conversation with one of his crack-addict junkies about buying bicarbonate of soda is extended here to the point of being a little too comedic, and the extended bit with the girl and her baby is just painfully prolonged to the point where it’s arguably overkill.

Time Lapse offers up 72 seconds of the pure, unadulterated time-lapse footage from the film, shot across London. Bold and uncompromising, Ben ‘Plan B’ Drew’s directorial debut is a strong and personal piece featuring into his ongoing mission to raise awareness about social issues and disaffected youth. Shot on a micro-budget it is one of the surprisingly powerful films that I have seen this year, despite the fact that its near-completely-bleak outlook and often disturbing content can make it far from a pleasant experience. Showing some serious promise in not only his writing of this piece but also his stunning direction – adopting a fresh and innovative style that cleverly blends song tracks from his accompanying album of the same name, and makes effective use of just about every filming technique you can think of – it would seem that many have underestimated his capabilities in filmmaking. If this is anything to judge him by then I certainly think that he has a promising future beyond just his popular albums.

On Region B-locked UK Blu-ray we get decent enough video and audio and a fairly comprehensive selection of extras which features a couple of must-see features, including Plan B’s compelling TED lecture and the original short film that this feature was expanded from.

If you can stomach it, Ill Manors is a worthwhile watch, brimming with urgency in its social awareness messages and powerful promise from its striking story and raw performances. Give it a rental, it’s a tough watch, but worth it.