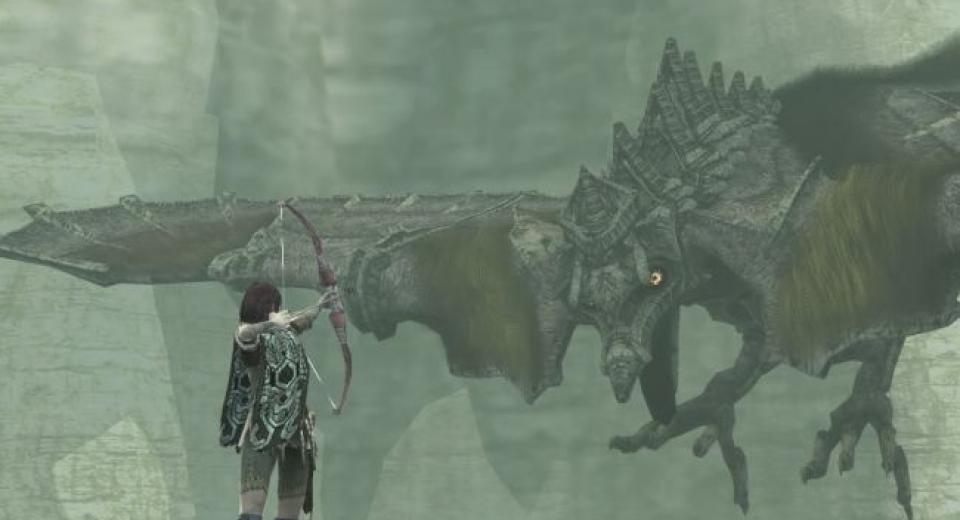 
ICO and Shadow of the Colossus are the latest in the procession of PS2 titles to make their way to the PS3. Reviewing these re-releases is unique in as much as they have to be written for two audiences: those who have been waiting with feverish anticipation of their favourite title to be given an HD makeover, and those who have never played the game before. This is especially true for the ICO/SotC collection, because while many who played them on the PS2 would say they are among the best that the console produced, there’s an awful lot of gamers out there who have never played them at all (including, to my surprise, many of my friends).

So for those who haven’t played either, let’s take the set-ups of the games in turn, starting with ICO. (The rest of you can feel free to skip down a few paragraphs.) The eponymous player-character is a young boy born with horns on his head. The people of his village whisk him off to a castle and imprison him in an upright tomb. The story kicks off when some good fortune allows him to escape from his sarcophagus and he sets about trying to escape the castle. He soon meets Yorda, a celestial, otherworldly girl who speaks an incomprehensible language.

It’s at this point the real mechanics of the game kick in. It’s essentially one big escort mission. You can take Yorda’s hand and run, or call her to follow you, but she is far less mobile than Ico so your main task is to create paths that allow her to pass from one area to the next. All the while, shadowy enemies are trying to drag her away and you’ll need to defend her. The fighting mechanic is extremely basic, but it’s appropriate for the gameplay.

Shadow of the Colossus has an even simpler backstory. The player-character Wander sets off for a mystical temple in the hope of resurrecting a girl called Mono. When he arrives, a mysterious voice tells him that it is possible for her soul to be returned to her, but first Wander must defeat 16 colossi. The gameplay involves Wander and his horse Agro seeking out each colossus in turn and defeating them. That’s all there is to it.

The mechanics are equally simple. Wander has an ancient, magical sword that, when held up to sunlight, points him in the direction of the next colossus. Taking down these awe-inspiring creatures is more akin to a puzzle than traditional combat. You’ll usually need to scale them in some way, and repeatedly stab one or more tricky-to-get-at weak spots. You have a grip meter which runs down if you hold on for too long, so there’s a balance to be struck between venturing up/over/across a Colossus and taking a breather when you can.

The question is: do these games stand up?

And the answer is yes, mostly, or at least, where it counts.

The HD makeover doesn’t extend to textures so the improved resolution is the only material difference between these games and the originals. But the atmosphere always counts for more than the graphical detail, and the character animations are better than many modern games.

For example, watching Wander cling onto the back of a flying colossus while it spins and soars to try and dislodge him is simply breathtaking. His body seems to move completely naturally as he tries to keep his balance: EA could take note for future iterations of FIFA, there’s an amazing ragdoll effect as he clings on desperately. Similarly, the hand-holding animation between Ico and Yorda is so genuine it’s actually quite moving at times.

Both games suffer a little from outdated control schemes, but it’s particularly noticeable with ICO. The camera is awkward at times, and calling Yorda over is a hit-and-miss affair. The AI in general is quite poor in this regard, and can be a real frustration.

Shadow of the Colossus is mostly fine to control, but it has a few quirks. You’ll draw your bow in whichever direction Wander is facing; the norm these days is to immediately draw a weapon in the direction the camera is pointing. There’s also an issue with the camera completely losing the plot on rare occasions, particularly when a colossus is trying to throw you off, or when you’re quickly moving above and below the waterline. So what to make of these two haunting, lonely, thrilling, but mechanically outdated games?

For those of you who know these titles well, listen: An HD overhaul isn’t the main reason to buy this Blu-ray, although it is a bonus. You should invest again because you, better than anyone, know how amazing these games are. It’s not a decision worth thinking about: Stop reading and go buy. Now.

And for those of you who somehow missed ICO and Shadow of the Colossus the first time round, now is the time to put things right. People will call these games classics, masterpieces, and so on, and there’s a lot of truth behind the superlatives. But that kind of talk can lead to unrealistic expectations. The word I’d use is refreshing.

Escort missions won’t be anything new to you (if you’ve played the excellent Enslaved you’ll know the legacy of ICO better than most) but ICO has a wonderful story and is well worth experiencing, despite the odd frustration.

Shadow of the Colossus is, in my opinion, the better game, and is a title everyone should try. Some of you will will love it. Some of you will be bored in minutes and never try it again. But if you think it’s the kind of game that might grab you, then you owe it to yourself to give it a spin.

The prospect of bringing together remastered versions of Ico and Shadow of the Colossus on a single Blu-ray disc is mouth-watering indeed. It’s widely acknowledged that Team Ico’s two PS2 titles are among the most innovative released on the system, and they’re often cited in the well-worn ‘games as art’ debate. The PS3 versions are almost entirely the same, with the exception of improved visuals, specifically HD resolution and stereoscopic 3D. So it’s a second chance for those who never got to play them originally, and surely an irresistible prospect for established fans of the games.