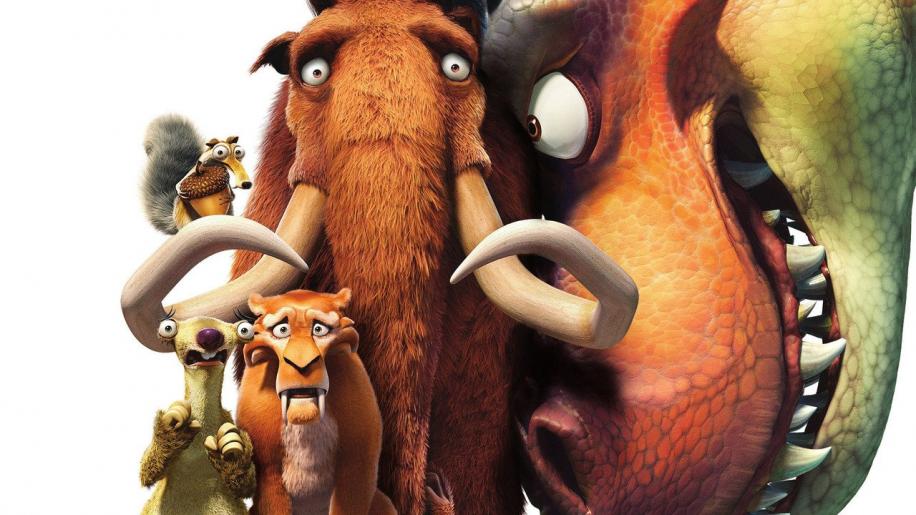 “Why is it called the ‘Chasm of Death?”

“We tried calling it “The Big Smelly Crack” but people kept giggling.”

The Ice Age movies are the cinematic equivalent of Marmite, people either love them or loathe them. This polar reaction is rather curious since the films are largely inoffensive CG animations that combine laughs with a degree of pathos. Yes they aren’t in the same league as the sublime creations that come out of the Pixar dream factory but frankly what films are? The critical community in particular have been harsh in their criticism of the Ice Age movies but they have performed remarkably well at the box office. In fact Ice Age: Dawn of the Dinosaurs is the seventh most successful film of all time outside the US and pulled in a whopping $887 million world wide, making it the fourth most successful animated feature ever.

Ice Age: Dawn of the Dinosaurs is the third entry in the series and the first to use 3D theatrically and it might be this fact that explains the film’s remarkable box office success. The first Ice Age introduced the main characters of Manny the mammoth (voiced by Ray Romano), Sid the sloth (voiced by John Leguizamo) and Diego the sabre-toothed tiger (voiced by Denis Leary). It’s plot centred on the gang’s attempts to return a human child to its tribe as well as Manny’s acceptance of friendship in lieu of isolation. The second film, Ice Age: The Meltdown, builds its plot around Manny’s mistaken belief that he is the last mammoth and introduces us to three new characters, Ellie who is a female mammoth (voiced by Queen Latifah) and two annoying possums called Crash and Eddie (voiced by Seann William Scott and Josh Peck respectively).

The third film, which continues the modern trend of using colons and subtitles rather than numerals for sequels, kicks off with the discovery of a lost world beneath the ice in which dinosaurs have survived their extinction millions of years earlier. The Ice Age films have never been big on scientific accuracy, with the ice age itself seemingly lasting just a few weeks rather than hundreds of thousands of years, so introducing dinosaurs is hardly surprising and besides they’re popular with kids. The primary message of the film relates to the ideas of family, with Manny and Ellie expecting a child and Diego feeling isolated from the others. These themes of family are furthered explored by Sid’s misguided attempts to act as surrogate parent to three baby T-Rex’s. The exploration of the newly discovered lost world introduces one of the new characters in the film, the unhinged weasel Buck - “short for Buckminster and long for Bu” - who is voiced by Simon Pegg.

Running concurrently with the plots of all three films are the misadventures of an acorn obsessed sabre-toothed squirrel called Scrat. It is this character that provides some of the biggest laughs in the series and, interestingly, he is essentially mute, aside from various squeaks provided by Chris Wedge who was the director of the first film. It is this reliance on sight gags that might explain the popularity of the Ice Age films outside the US, as the comedy translates easily to countries whose populations don’t speak English. In Ice Age: Dawn of the Dinosaurs we are also introduced to Scratte, the other new character, who in one of film’s funnier sight gags is revealed to be a flying squirrel. She acts as both the object of Scrat’s affections and as a rival for his beloved acorn.

The addition of the lost world and the dinosaurs themselves allowed the designers to go wild with their imaginations, which is probably just as well since there’s only so much you can do with ice. The character design was overseen by Peter de Seve and he deliberately chose variations on the usual dinosaur species that are seen in recent movies that feature them. So in addition to the aforementioned baby T-Rex’s and their mother, he also used the Baryonyx as Buck’s nemesis ‘Rudy’ (although its similarity to the Spinosaurus seen in Jurassic Park III draws obvious comparisons to that film) as well as Guanlong which are similar to the more familiar Velociraptor. Since no one actually knows what colour dinosaurs are, de Seve and his team could take liberties in that department and the lost world approach allowed them to create a colourful new environment lit by sunlight filtering through the ice above.

The story is fairly basic and the main plot centres around the gang trying to rescue Sid after he is taken away by the mother T-Rex when she turns up looking for her offspring. The main characters must make their way through various obstacles in the newly discovered subterranean world and on the way they meet Buck. It has to be said that much like Crash and Eddie in the previous film, Buck is quite an annoying character and hopefully the filmmakers won’t feel the need to bring him back for the inevitable fourth film. The annoying nature of Buck isn’t helped by Simon Pegg’s voice work which manages the remarkable achievement of sounding like someone doing an English accent even though he actually is English. The majority of the voice work in the movie is actually quite lackluster, with the exception of Leguizamo’s lisping Sid.

The animation, whilst not perhaps as artistic as the CG in a Pixar movie is still very good and the slightly more cartoonish look perfectly matches the more comedic nature of these films. Aside from the already mentioned comic delights of Scrat and his acorn there is also Sid who remains a source of some of the best jokes and a particularly enjoyable scene involving Diego and a cocky antelope (voiced by SNL regular Bill Hader). Unfortunately Manny or rather Ray Romano, remains something of an acquired taste and some of the humour is quite puerile but then again this is predominantly a kid’s film. Ultimately the film contains sufficient jokes and enough likable characters to never out stay its welcome during its 94 minute running time.

Of course the major selling point of the third film is the 3D and here the filmmakers certainly deliver the goods. It is obvious that key elements of the plot were written specifically to take advantage of the film’s 3D template. So for example there is wonderful comic scene involving Scrat, Scratte and the acorn, all floating around inside bubbles. The bubbles not only provide some great sight gags but also lend themselves to the 3D process where the added dimensionality perfectly renders the bubbles and the distorted characters within. The same is true of a scene involving two of the characters stuck inside a carnivorous plant, here once again the 3D lends the scene a sense of claustrophobia. The use of 3D also results in a very exciting aerial chase involving Pteranodon and the Plates of Woe, with their multiple layers, were clearly designed with 3D in mind. Considering the film came out before Avatar and considering that it is aimed primarily at children the filmmakers are to be congratulated for keeping the 3D within a reasonably conservative depth budget. That is they avoid too many negative or positive parallax images, which means objects in the extreme foreground or background or to put it another way, they aren’t constantly poking you in the eye.

It’s fair to say that Ice Age: Dawn of the Dinosaurs didn’t deserve the critical slating that it received on its initial release back in 2009. Yes the film’s animation may not be as detailed or classy as some other CG features but it suits the tone of the movie. The addition of the 3D is excellent and is used in a way that both enhances and advances the story without ever being gimmicky. The plot may not be particularly original but it breezes along at a reasonable place and has enough laughs and excitement to keep both the parents and their kids entertained. If nothing else the film is worth seeing just for the hysterical sequences involving Scrat and his acorn - it really is about time someone gave that squirrel his own film.