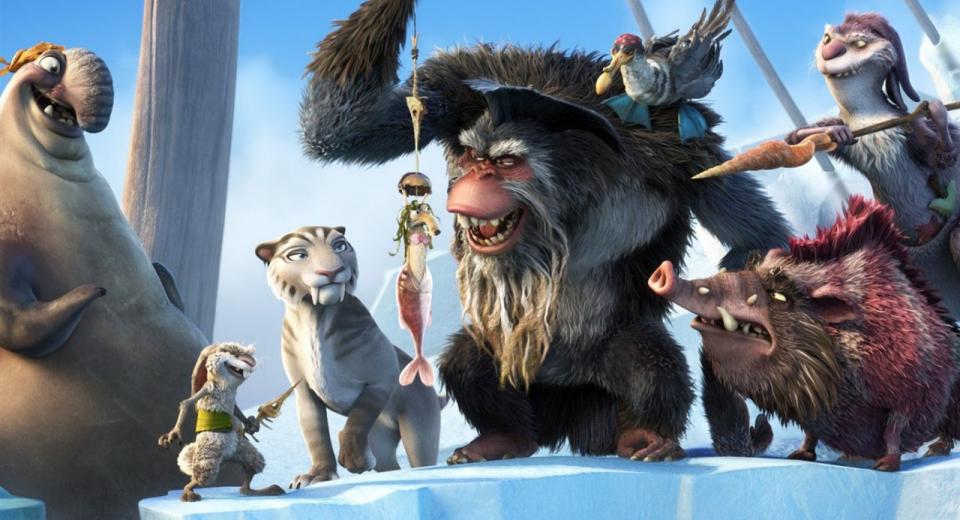 So just what was the motivation behind producing the fourth instalment of the hugely profitable multi-billion dollar Ice Age franchise?

Ten years on from the original movie, the latest outing is a feast of 3D, dynamic sound and smooth animation. The story, such as it is, is not great and the outcomes all too predictable. Still, the kids love the animals and a gross in excess of $800M speaks volumes about the continuing success of the genre.

Things could have been very different, as Fox planned the original movie to be a traditionally animated movie, but the failure of another project and the rise in popularity of Shrek and Monsters Inc. changed their minds and what could have been a one-off cartoon became one of the most commercially successful franchises of recent times. Not only have there been the four films, but also a huge array of spin offs, from theme park rides to soft toys, computer games and clothing.

What does come across is that the writers are starting to get a little desperate for story ideas. When we think of ice ages, we think of global temperature shifts; yep done that, extinct creatures who have somehow survived, cut off from the rest of the word; yes, twice now, so what’s next? Well, we will need some sort of cataclysmic event to trigger some sort of change and set up a new set of events. Enter Scrat, the sabre toothed squirrel with the acorn fixation. You see, it was his fault the continents spilt apart, as he tried to plant his acorn in the ice, triggering a massive split in the ground that led to him disrupting the earth’s core, causing massive planetary change, the drifting apart of the continents, the stretching of giraffe’s necks, that sort of thing.

Meanwhile, in the Mammoth herd, things are not going well. Mum and Dad Manny and Ellie must deal with Peaches, their teenage daughter’s growing pains, as she starts to take an interest in boys. To be honest though, as far as Peaches is concerned, it’s just one boy and he is a hot young mammoth called Ethan and is the coolest Elephantidae on the planet. Of course Dad is not going to stand for this. She can start dating “After he is dead” and as for hanging out with all her dead beat friends, next she will be having her trunk pierced and getting addicted to berries! A sudden earth heave puts an even bigger division between Manny and Peaches and her last sight of him is as he drifts off into the distance.

With the continents steadily drifting apart, more animals are on the move, including Sid’s sloth family, who hang around just long enough to deposit toothless old Granny before scarpering. With sabre tooth tiger Diego along for the ride, the old team are together again.

Each outing introduces some new characters and pirates form the central theme this time around. Led by Gutt, the hairy, some might say swarthy ape, his motley crew includes rabbits, kangaroos, warthogs and an elephant seal. His first mate is a tigress called Shira, who soon develops split loyalties between her pirate crew and Diego. Gutt plucks the involuntary mariners from their ice raft and brings them aboard his pirate berg. The choice he gives them is simple, become part of his crew or, well, they might find themselves reconstituted as small piles of assorted animal do-do…

Is this the end for our heroic adventurers? Can they escape the clutches of the pirate crew? Can they find their way back home against the current and does Turn-back cove offer them their salvation?

This of course could form the complete plot of the film. All they need to do is escape the pirates and get home. Instead, there is a bit of a twist and of course Scrat gets his own sub plot, as usual. Along the way, there is plenty of humour interwoven amongst what is essentially a coming of age film.

The problem is that the plot starts to feel over long and somewhat contrived. A lot of the originality of the first couple of outings is gone and the characters have failed to develop. It all feels a little tired and added to that, a lot of the set ups feel like they were written around making the 3D look good. There is also very little in terms of story flow, with it all feeling very disconnected. There are continental shifts in the story location and occasionally it all gets a bit confusing.

The animation is very slick and the 3D on the whole pretty good. Unfortunately it is not in the same league as neither Brave nor The Lorax – just two animations of the same generation. It mainly shows in the backgrounds. These are simpler than either of the other two movies and show very little in the way of movement. Check out Brave, with its gently swaying woodland and animated sky, or The Lorax and the simply superb townscape. Here, where the breeze should be gently stirring the tops of the palms we get just a static fill. The characters themselves, though a great improvement over the earlier outings, are also not quite up to the quality attained by Brave. Although it is clear that a lot of work has gone into making them move like real creatures, the fur does not have the same fine detail and the rippling skin and muscles underneath do not appear quite as realistic. It is so easy to get left behind in animation these days, with virtually every film adding a new tool for the animators to play with.

So we end up with an average animation of an OK story, voiced by Queen Latifa and Dennis Leary plus Patrick Stewart, Simon Pegg, Jennifer Lopez and quite a few others. The feeling is that just enough effort went in to the movie to ensure it would be a success and that was about it. The film was going to be a success because the franchise is so strong and once established, kid’s series are pretty much a guaranteed money earner. The 3D feels more like a gimmick than ever here and adds very little to the film as a whole. By all means buy the disc for the kids, but save yourself some money and buy the 2D version.