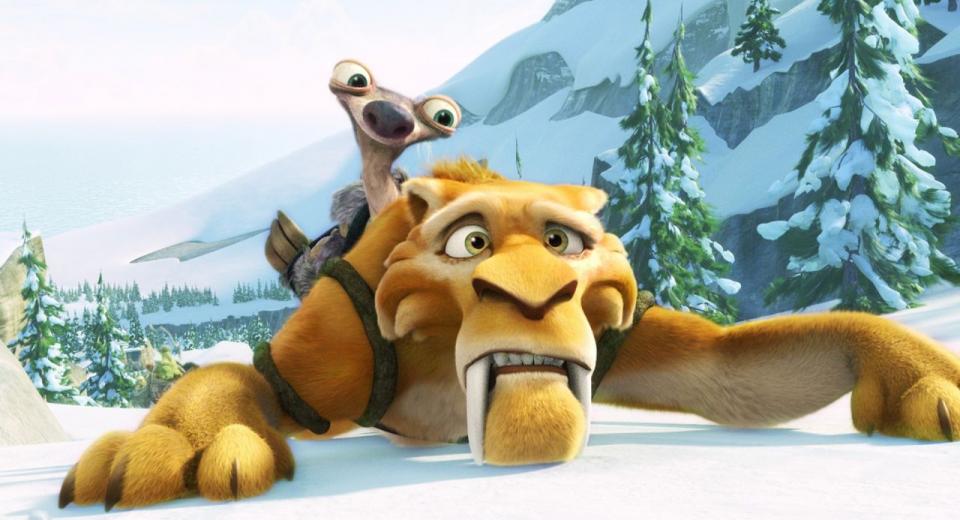 This score is based upon the 3D disc. Comments may not apply to the 2D version.

Presented in 2.35:1 AVC-MPEG 24FPS, The picture looks every bit as clean as one expects from animations these days. In 3D, the bright whites of the ice flows do not burn, while the verdant greens of the forest retain their depth. The animation is rock solid throughout, with no visible artefacts and no serious 3D issues either. On the whole the animation and camera style is more simplistic than Brave, with very little in the way of pull focuses or dynamic scene changes – where one shot morphs or slides into another. This is no doubt to accommodate the 3D, as the medium does not lend itself to such subtleties without issues. Low level information is very limited due to the fairly simple animation style, but the creatures themselves have plenty of detail, from the decaying molars of Gutt to the gently swaying mammoth butts. As mentioned in the main review, the backgrounds feel very stationary and lacking in life after the treats of both Brave and The Lorax. Despite this, the layering is not too bad, with plenty of roundness to foreground objects, a small amount of pop out and in-front objects masking the inadequacies with the background to a certain extent. A solid 3rdplace behind the other animations we have looked at this past few months. The 5.1 DTS-MA HD stream is strong and dynamic, with clear dialogue and an instantly forgettable music score, including a few pop songs shoe horned in for publicity purposes. The effects wrap around the sound field very effectively, with good placement and well controlled low end. There is nothing here to frighten the kids with, as the louder sections tie in with the on screen action perfectly. Music joins the effects in the rear channels from time to time and a number of vocal tracks swing around a fair amount as well. It’s not all good news, as ambient effects are limited and the music is just something to fill the dead air. Again, both Brave, with its fun Celtic inspired soundtrack and superb Dolby Atmos derived mix and The Lorax with its more traditional 5.1 cartoon score beat Ice Age 4 into 3rdplace. The Blu-ray 2D disc contains the full set of extras. These are all nicely made in HD and are accessed via a nice quick and easy to navigate menu.

First up we get a 10 minute re-cap of the first three films. This is a great way to see just how far the animation has advanced. A shame the sound is just 2 channel, but this is also true of the rest of the shorts as well.

Missing Links shows two short scenes that made it no further than the drawing board. I don’t think the film missed them very much.

Through a Pirate’s Spyglass contains two short movies. The first concentrates on the stars behind the voices. The good news is they do not take themselves too seriously and the whole piece is pretty tongue in cheek. The second section concentrates more on the process of creating the characters, both in look and personality. It’s a bit more serious and very interesting to boot.

Granny and the stink of the Sloths attempts to verbalise how bad Sid and Granny smells, before going on to explore Sid’s family in more detail. All very light hearted and fun to view.

Whale of a Tale: Drifts, Rifts, Beasties and Myths is a set of three shorts that cover some of the pseudo science behind the movies, and explains a little about what continental drift really is. The Beastie clip discusses how the monsters and creatures were created, based upon real animals. Myths concentrates on the links between the storyline and the ancients tales that the writers used as a basis for some of the story lines, including the fabled island city of Nutlantis!

Scrat got your tongue can be about no one but nut obsessed sabre toothed squirrel. He is the catalyst behind many of the world changing events and of course has no luck at all where acorns are concerned…

There is also a musical section, with some of the songs from the movie, plus the video from The Wanted.

The Live Extras menu allows you to view the latest release trailers and also find info about actors from within the film.

Party with a Pirate is an enhanced movie mode, with a pop up guide showing you some of the special features buried within the disc.

Language support is predictably wide, with Spanish, Portuguese and Nordic all included, but typically for a Fox disc, these are not mentioned on the box. The discs are region B only.

Ice Age has always played second fiddle to the more polished animations like Shrek, Madagascar and Monsters Inc. Despite this, Ice Age is a truly massive global franchise and this film is a pleasing enough addition to the series. It is nothing special, but it is not a particularly bad movie either. The storyline feels a bit contrived and there is a certain boredom to the characters. What started out as humorous little mannerisms in the early movies have steadily become magnified into annoying distractions that spoil the flow of the story. There is also a little too much American preachiness going on as well. Kids do not learn moral values watching cartoons – thank God or they would all be launching ACME rockets at each other beating each other over the head with frying pans, so don’t bother trying to tell them about friendship or global environmental catastrophes, they can learn that elsewhere.

The 3D adds very little to the package and I have my suspicions a better film might have been made if the 3D engineers had not been peering over the animator’s shoulders telling them what would and would not work in the new environment. In 2D, the movie looks very good and the sound is fine as well. In fact, I would go so far as to sum the movie up in one word: Acceptable.