I Still Know What You Did Last Summer Movie Review 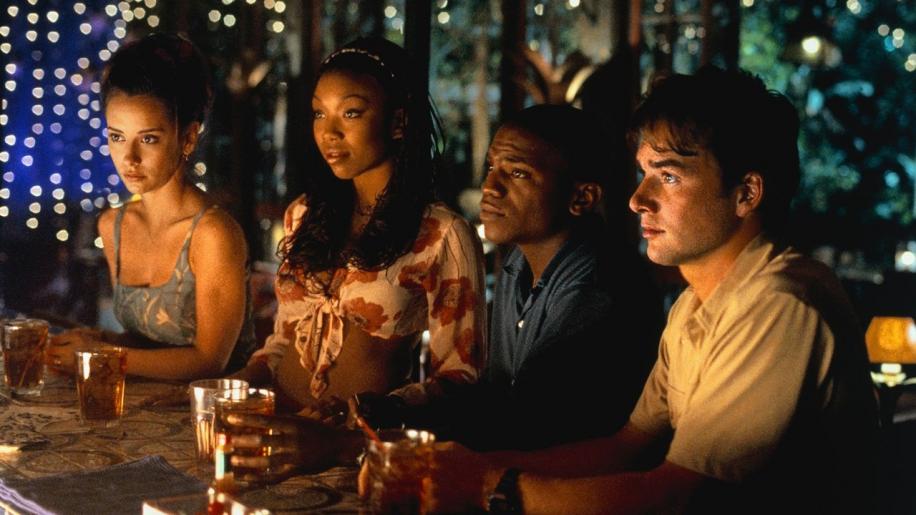 I Still Know What You Did Last Summer Movie (1998)

Although the director was changed the remaining survivors from IKWYDLS were played by the same actors so there was continuity from that point of view; this continues with Ben Wilson again rising from the dead to hunt down these remaining stragglers and their new associates.

Julie James (Jennifer Love Hewitt) is still continually haunted by the experiences she had last summer; she still sees the living corpse of Ben Wilson in the shadows and around the corners, she still finds it difficult to go out, to make new friends and to live her life. One of her friends though, Karla (Brandy Norwood) struggles to get her out of her shell and sees the perfect opportunity to do so when winning a radio phone in competition; her answer to the question “What is the capital of Brazil?” being Rio de Janeiro.

Karla has four tickets, she obviously wants to take her boyfriend, Tyrell (Mekhi Phifer), and Julie. Julie wishes to take old boyfriend, Ray (Freddie Prinze Jr.), himself a victim of Ben Wilson's earlier nautical exploits. Ray's up to the task but at the last moment, en route to join our intrepid threesome, is yet again beset upon by old Ben, narrowly escaping, sustaining concussion and broken limbs ends up in hospital. Ray's place is taken by new bo on the block Will Benson (Matthew Settle). This suits Karla as she's continually trying to match mate him and Julie. So it's off to the Bahamas and the holiday of a lifetime; but could this be their last as it appears that Ben Wilson inhabits the remote island and he's still intent on getting revenge?

ISKWYDLS really should have been called “I Still Know What You Did Last Summer Bar One” but then that's not as catchy really is it, so that failing aside what's the rest of the movie like? Well if you hadn't guessed from the introduction above what's about to happen and why (and that short piece only covers say the first 15 minutes of the movie) then you might just enjoy it; for the rest, the initial part of the movie gives the game away and from that point on it's just a matter of seeing who gets offed when.

The teen slasher flick hasn't changed in 30 years since the iconic Halloween graced our screens and our psyches. IKWYDLS and this sequel ISKWYDLS adds nothing to the genre that we haven't already seen before. These movies are cheap to make though and usually pull in the dollars and make a profit so like Michael Myres before them they are continually resurrected to pull the audiences in time and time again. In what is ostensibly a horror film I would love to be chilled to the bone but it appears that this is becoming more and more difficult to achieve; certainly the teen slasher genre doesn't do it and you have to delve into the so called intelligent but subtle horror of say The Orphanage which seems to send those icy shivers down this reviewers spine.

What ISKWYDLS offers the viewer is nothing more than another gratuitous, voyeuristic, circus show of thin storyline, one dimensional characters who have no reason to hunt for the killer in darkened rooms (have teen slasher directors not learned from Scream?), minor shocks and the all too increasingly bloody ways of dispatching the victims. It seems as though it is this final aspect which is the only way of differentiating one teen slasher flick from another; the hunter's modus operandi, how they choose to dispatch their victims and the reasons for them doing so. If in the first film you accepted the reasons behind Ben Wilson's revenge surely that cannot be carried on forward to this incarceration; not only is he intent on seeking out Julie and Ray again but he seems to have issues with everyone who comes across his path and this doesn't really continue the theme of that first film.

On a plus front an uncredited Jack Black pops up as a weed smoking Rastafarian pool attendant and as I never knew he was in this from the get go I sat up and took notice whenever he was on screen. He adds a lighter note to the proceedings and genuinely his scenes have to be the best aspect of this film. He's not a great actor, but that says so much about what's left in this film when his presence is not on screen. The rest of the acting, like the characters they are playing, is thin indeed with all of the characters being pulled from the standard bible of slasher flicks, like the plot there's nothing new there and no one has any depth of character for the viewers to have any connection or empathy with. When some of them get their comeuppance do you really care or do you just hope that it'll be gruesome enough to satisfy your gore lust? For me I really didn't care either way; for me I really have to have interesting characters that I some some feelings for. Not necessarily people I can relate to but people on screen who at least come across as semi believable.

Certainly I feel that fans of this franchise or in fact fans of the whole teen horror/slasher movie will have a good enough ride with this film but for me I found it all too often sadly lacking with only the brief appearances of Jack Black to keep me semi entertained. It made my heart flutter once, it never engaged my brain nor my emotions and I'm still waiting on that new twist to this over saturated genre.