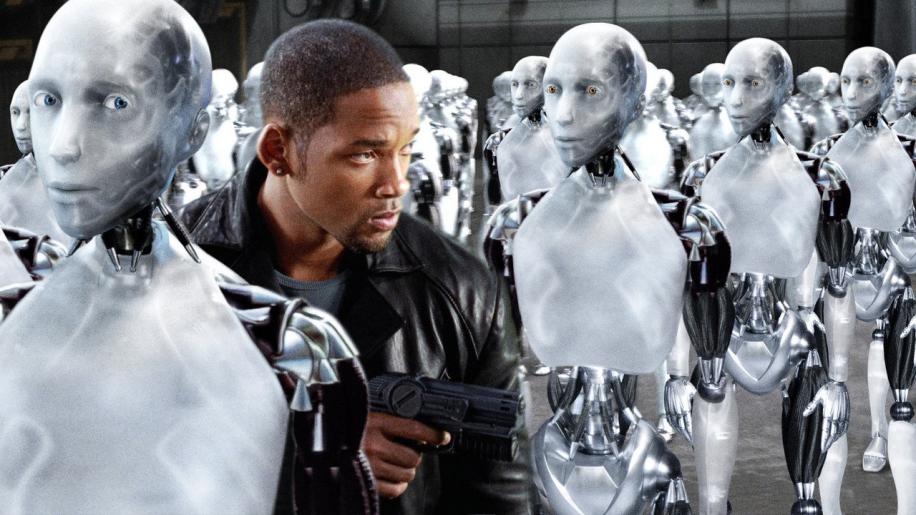 Set in the near future, I, Robot, tells the story of Detective Del Spooner (Will Smith) a techno phobic homicide cop living in a society where robots are responsible for all the menial and repetitive tasks, essentially they are the uncomplaining slaves of the 21st century. The behaviour of the Robots is controlled by The Three Laws of Robotics, which are hard wired into each and every one. The Three Laws state that
1. A robot may not injure a human being, or, through inaction, allow a human to come to harm.
2. A robot must obey a human, except when such an action would conflict with the first law.
3. A robot must protect its own existence, except when doing so conflicts with the first or second laws.
Spooner however has seen these laws in action at first hand, and his experience has led him to distrust robot behaviour, which is based on a calculation of logic and probability. He is the only cop on the force who is not surprised when he is called to investigate the suspicious suicide of the father of modern robotics Dr. Alfred Lanning (James Cromwell) and despite the protestations of his Chief and the C.E.O of U.S Robotics (Bruce Greenwood), Spooner finds and arrests a robot, Sonny (voiced by Alan Tudyk) who he believes was responsible for Lanning's death, despite the three laws. He is assisted in his investigations by robot scientist Susan Calvin (Brigit Moynahan).

Directed by Alex Proyas, whose back catalogue includes the excellent, but underrated movies Dark City and The Crow, this movie is a stylish and stylised thriller. It rattles along at a fair lick and comfortably holds the interest of the viewer. What the movie is likely to be remembered for though is the sumptuous CGI, particularly the character of Sonny, whose transparent synthetic face expresses more emotion than the rest of the cast combined. Don't misunderstand me the cast are fine. They turn up, say their lines, and smile and grimace in all the right places, but the story is Sonny's and the computer animators manage to fill the character with enough pathos to draw the empathy of the audience. Also worthy of note are one or two excellent set pieces, most notable of which is the chase scene in the motorway tunnels in that stunning Audi concept car. Car chases usually leave me cold, as a staple of movies since Ben Hur they have failed to make much of a progression, but the modern setting of this movie has allowed Proyas and his writers to let their imaginations roam, as a result what we get is a thrilling 15 minutes of cinema.

As most of you may already know the story is based on the writing of Isaac Asimov, and in particular his collection of short stories first published in the 1950's. The titles claim the story was “suggested” by Asimovs work, and this is largely accurate. The story is the original work of screenwriter Jeff Vintar but does borrow characters, themes and plotlines from Asimov's book I, Robot, and indeed several other short story collections. The fusion works well in my mind, making a very watchable, entertaining and compelling piece of cinema, out of a series of largely disjointed works, while keeping the thrust and ideas of Asimov's almost prophetic human analogies.