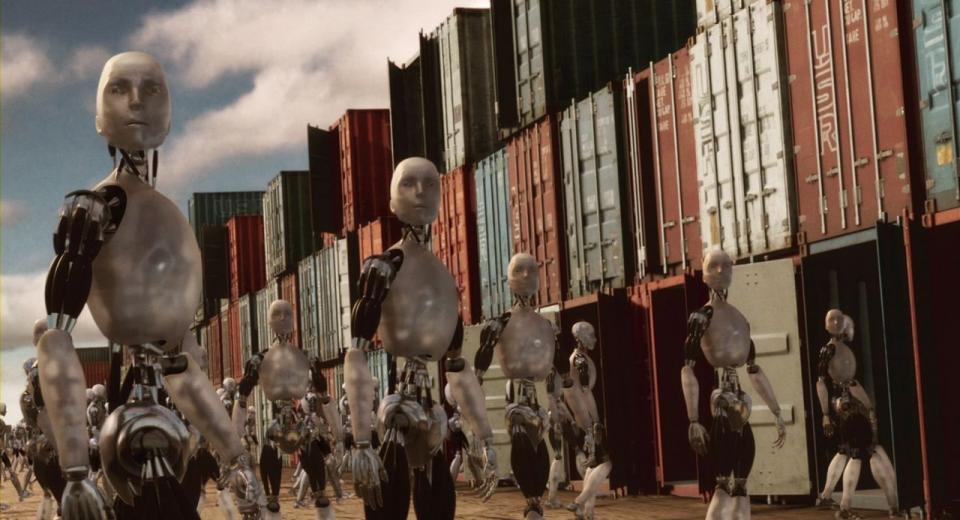 Just after the nice shiny 3D review disc dropped on the doormat, I was in a petrol station and there was a DVD of the same film on sale for 10% of the price of the new release. One therefore has to question the motive of anyone buying the 3D release; is it really ten times as good?

Asimov fans need stop reading now. This film was not even inspired by the overlord of sci-fi’s writings to start off with and only took the name and some of the characters and significant plot points in later re-writes. This led to a backlash on initial release, as many fans were hoping for something closer to the original short stories. What we actually ended up with was another all action vehicle for Will Smith to run around and do heroic things in. This does not necessarily make for a bad movie, but it does limit the enjoyment for traditional Asimov fans.

The “Three Laws” formed a central part of the short stories and this is carried over to the film.

Pretty water tight huh? Not if you are a scheming super intelligence who considers her human makers as nothing more than children. One of the other main shared ideas between the film and book is the positronic brain. Asimov makes it clear in his writing that it is a thing so complex that no human can understand it and this is at least in part carried through to the film. This marvellous creation allows the robots to develop their own artificial intelligence and think and behave like humans. Of course the laws hold them in check and their programming equips them for certain tasks. So far, so good, we could all do with some extra help around the house and a tireless servant who can be implicitly trusted would be pretty high on all our lists of must have gadgets.

We do appear to be a little thin on the ground in terms of originality of script at this point. AI did the whole robot thing three years before and Terminator got there with Skynet – the human created but ultimately fatal artificial intelligence that took over the earth over twenty years earlier, and that’s just the first two films that come to mind. So what about Will Smith’s character? The grouchy cop with an unshakable belief that he alone knows the truth about the robots and his even grumpier but understanding boss has been done to death, with everyone from Eddie Murphy to Arnold Schwarzenegger getting in on the act. It’s all feeling a bit lazy so far…

Set in 2035, the film is not selling the ultimate utopia. There is still crime and deprivation, but the robots are making things better. The key company producing the mechanoids is US Robotics. Obviously the market for 56K modems has dried up in the 2030s and they have moved on somewhat. From their shiny ivory tower in the centre of Chicago they have ceded so much power to Viki, their positronic building brain, that she is now constructing not just robots autonomously but also the factory they are built in. Of course, the laws still hold true, but with a new “uplink” between all the new NS-5 robots and USR’s central command, these robots no longer serve just their human masters.

Enter Detective Del Spooner (Will Smith). He has had a bad experience of robots in the past, so is naturally suspicious. When an old friend of his – founding father of the robots Dr Alfred Lanning (James Cromwell) apparently commits suicide in the USR building, Spooner find himself summoned by a hologram created by Lanning and with him when he died. Spooner soon becomes embroiled in a much bigger story than just a suspicious death. Protégé of Dr Lanning – Susan Calvin (Bridget Moynahan) soon links up with Spooner, but initially does not share his views on the robots, after all, this is her life’s work and she still believes the laws offer total protection from harm from her creations. Things go from bad to worse for Spooner, with the robots seemingly out to kill him now and no one will believe him.

The only witness to Lanning’s death is a prototype robot named Sonny. Although he denies being a killer, Spooner is not convinced. Susan Calvin is tasked with analysing Sonny and comes up with some frightening conclusions. It seems that Sonny can ignore the three laws if he feels he can best serve the human race by doing so. Now the focus of the investigation shifts to the guiding force behind USR. Can Spooner and Calvin stop the machines before they change the world forever?

The use of some character names further ties this film into the earlier book, but the similarity between Asimov’s Calvin and that portrayed in the film could not be slimmer. In the books, Calvin is an almost android like woman, with no emotions or sense of adventure. She thinks of nothing but sticking to the rules and towing the company line. In the movie, the character is much more human like and is not averse to breaking the rules to find justice

So we must set aside the book and concentrate on the film in isolation. The plot isn’t too bad, but some aspects seem a little ridiculous. Would just one man really be suspicious of the robots, with the rest of the world quite happy with them? As we know, even the most incongruous pieces of technology are seized upon by conspiracy theorists, religious zealots or The Daily Mail and held up as evidence of our impending doom. Is it likely that just one company would be allowed to develop such a strangle hold on the market? I think not. The reason for Smith’s character’s mistrust of the robots is clearly outlined, as is his relationship with Dr Lanning, but you are still expected to fill in a few gaps along the way. The action sequences are predictably for a Will Smith vehicle, huge and dramatic, but somewhat far-fetched and unrealistic. Even some eight years after it was made, the animation still looks pretty good and the sound track rattles along at a good old pace. The failings therefore pretty much all centre around the plot and a few weaker performances – notably the rather wooden Bridget Moynahan who seems to be a little out of her depth here. A few more characters might have helped, as the cast feels very small. Of course the numbers are swelled with the CGI robots and these are well done and in the case of Sonny, he does come across as embracing human traits.

Going back to the original question, is it worth buying the 3D Blu-ray release over the older 2D DVD copy? Not for the story or the film in general in my opinion.