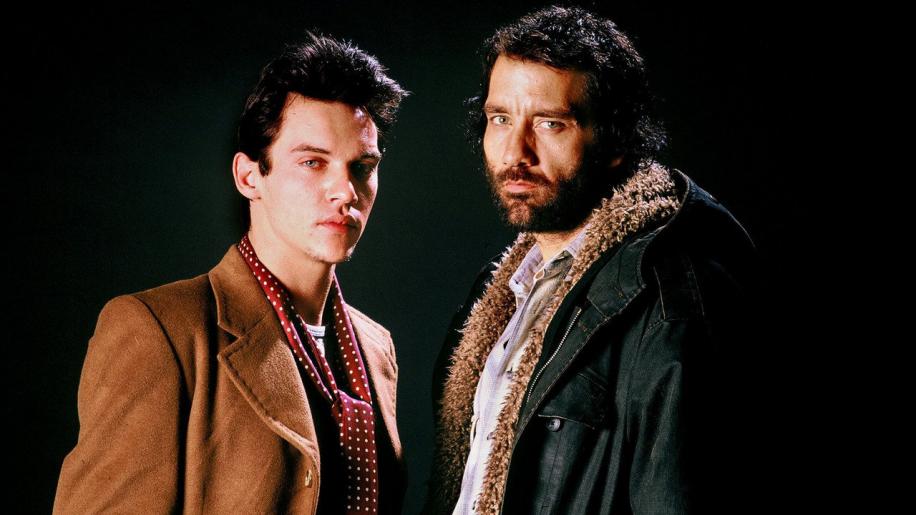 I'll Sleep When I'm Dead is presented with a 1.85:1 anamorphically enhanced widescreen transfer that perfectly represents this grimy underworld affair. The detail is good throughout, with just as much attention paid to long scene-setting shots as close facial expression. There is little grain apparent, and little edge-enhancement, and no imposing softness. The colour palette is bleak and expressive, but the colours chosen are well represented, with solid, deep blacks at the dark end of the spectrum. The transfer is decent and strong, with no apparent defects to impinge upon your viewing pleasure. It should be noted that the US release was mistakenly labelled as having a 1.85:1 aspect ratio when in fact it had a 1.78:1 ratio transfer. The UK edition maintains the original aspect ratio. The movie also has a fine Dolby Digital 5.1 soundtrack that similarly complements the gritty subject-matter. Although not the kind of material that warrants particular bass or surround action, the score does make for some exemplary mood-setting, surrounding you in the sentiment of the neo-noir crime atmosphere. A few outdoor scenes offer a little more surround activity and the party sequence towards the beginning is a highpoint of vibrancy for the soundtrack. The dialogue is sparse and, at times, almost mumbled, which means that you have to pay attention, but the track always presents the speech well. Overall, it is a solid soundtrack, ideally suited to the material. First up there is an Audio Commentary track with Director Mike Hodges and Writer Trevor Preston. Having been conceived nearly a decade ago, there is a lot of interesting history that they provide as to how this film got off the ground. They do the standard thing of introducing and praising all of the actors (noting their real crime roots) and their effective, minimalist acting. They also explain the familiar London locations chosen. It's nice to hear how they worked within the budget constraints and made the most of what they had, often using some very stylish long takes to do complex scenes. Their depth of perception into the minds of each of the characters is insightful and informative and you can see just how much love and affection went into this production.There is also a making-of documentary, “Mike Hodges and I'll Sleep When I'm Dead”, which contains far too many clips from the movie itself and a little too much advertising fluff for my liking - not least an irritating and pompous narration over most of the feature. The more interesting aspects include brief interviews Hodges and Owen themselves, on set filming certain scenes and talking about the low-budget production. Owen gives some background into his character and Hodges even says that Owen may have gleamed his perceptive take on the character from his own personal experiences, in much the same way, Hodges states, as Caine did for Get Carter. I'm glad that we get more input from the cast (including Charlotte Rampling and Malcolm McDowell) and crew (including the script-writer Trevor Preston) on this UK DVD release, but you have to appreciate that this is a twenty-five minute featurette with about half the time taken up by marketing padding, and far too many film critics' comments. The story re-telling is ridiculous as well, basically explaining the plot from start to finish! If you've seen the film, then most of that is worthless, and if you haven't then why would you be watching this? Still, as I said, it's just nice to have this kind of extra, and behind the scenes footage is always a welcome addition.There are two deleted scenes, presented with a fairly good picture and reasonable audio. The first runs at two minutes in length and features commentary from the two who did the main commentary - the director and the writer - who explain how it was tough taking scenes out of the movie. They are happy to see them on the DVD but talk about how they were basically unnecessary. The second scene is barely thirty seconds in length but has a much more significant impact as Owen's character Will confronts his brother's haunting memories, albeit briefly. Of the two, it clearly should have been left in, but I'm glad that we at least get to see it here.Finally there is a pre-menu ad for jobs associated with UK Film production, along with trailers for several upcoming dramas including the acclaimed Vera Drake and the oddly titled Jeff Bridges / Kim Basinger movie The Door In The Floor. I'll Sleep When I'm Dead is a great old-school crime drama from veteran Mike Hodges, and it marks yet another fine performance by the man-of-the-moment Clive Owen. Although its Spartan storytelling and moody, bleak atmosphere may be off-putting to some, it is a solid, strong British drama that deserves some consideration and appreciation. Whilst the U.S. release was quick-off-the-mark, the belated U.K. release has been given a considerable amount of extra love and affection, with solid technical specifications and a batch of interesting extras. I would strongly recommend you take a look at this - and a purchase not a rental because it's the kind of material that grows on you over time, not overnight. Recommended.