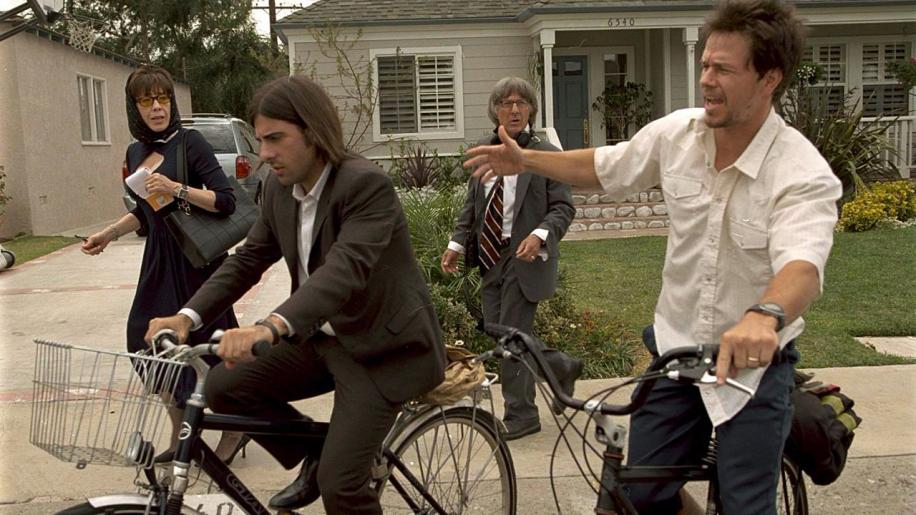 The film is presented with a gleaming 2.35:1 aspect ratio anamorphic widescreen transfer that does a reasonable job of showcasing the film's visualisations and imagery. The detail and sharpness are good, but not excellent - perhaps because the film itself has been shot in a particular 'rose-tinted' style, which leaves some scenes feeling softer than others. Luckily, at no point does this lead to significant - or even noticeable - grain. On the other hand, there is a little occasional edge enhancement which is noticeable but never impinges on your enjoyment of the movie. For such a visually-orientated movie, this is a perfectly acceptable, albeit not exemplary effort, and the main highlight - the broad and unusual pastel colour palette - is well-rendered. There are also no signs of dirt, dust or other print damage.

The only English audio track is a solid Dolby Digital 5.1 effort. Although some regard it as a little front heavy, I found the surround use to be significant enough in order to more than submerge you in the proceedings. There are some rather strange goings-on in this movie, which are made yet more odd by a perfectly chosen original score that is remarkably effective and strangely quirky. The dialogue is totally comprehensible, which is key to such a dialogue-driven affair. All in all it is a good audio track that compliments the movie well. There is also a dubbed Dolby Digital 2.0 Surround track and optional subtitles in both English and Spanish.

There are two full-length audio commentaries, one from just the director, and one where he is intermittently joined by three of cast members - Mark Wahlberg and Jason Schwartzman in person at his house and Naomi Watts by phone conversation. The first commentary is definitely the weaker of the two. The director, David O. Russell, has so many ideas and so much information to divulge about this movie - his brainchild for several years - but his solo effort was just a little too dry for my liking. He gives a great deal of depth to the characters, explaining how he wanted to portray people who follow an idea or cause beyond convention because those are his favourite types of people. He also goes over how the project came about - from his own knowledge of Zen and thoughts on philosophy - also including how he wrote the script specifically with parts intended for Lily Tomlin, Dustin Hoffman, Jason Schwartzman and Mark Wahlberg. He explains how he wanted to constantly keep the audience confused (he succeeded!) and he even offers up his own wise but potentially controversial views about 9-11. If you want to understand more about the movie and the though processes behind it then this will be worth your time, but be warned - it is a very dry, bland commentary that will probably be best in small doses.The second commentary is not a full-length commentary with the other cast members but instead yet another commentary with the director, occasionally interrupted by two of the cast for segments in the film (Mark Wahlberg and Jason Schwartzman), with a brief conference call to Naomi thrown in for the fun of it. A great deal of the same material as the other commentary is covered here, mainly because the director dominates the conversation, but thankfully Jason gets a few anecdotes in to relieve the abundance of bare facts. After a while Mark Wahlberg pops in (perhaps he was just being quite the rest of the time) and he does have a couple of interesting things to say but isn't really very assertive, unfortunately. To be honest, if you really like the film, and are into your commentaries, then both commentaries are a must - purely for the sheer volume of background information that is provided by the director as he explains almost everything you could possibly want to know about the movie and its origins. But if you don't particularly like commentaries, then neither of these is going to change your stance. They are by no means the best commentaries that I have heard but credit should be given for the sheer amount that there is to learn if you are interested enough.

Although it may not be to everybody's tastes, I Heart Huckabees is a very thoughtful film and is well worth a rental to see if you appreciate it. If you like Being John Malkovich, then that's a good start, and certainly don't by put off by not understanding everything on a first viewing - it would appear that this was the filmmakers' intention. As for fans - well the DVD would be a good purchase were it not for a 2-disc special edition currently available that is packed full of extra features. To be honest, the best extras are still retained here - the audio commentaries - but true fans and completists alike will still need the 2-disc set.