A legitimately interesting show – with a year-best lead performance! 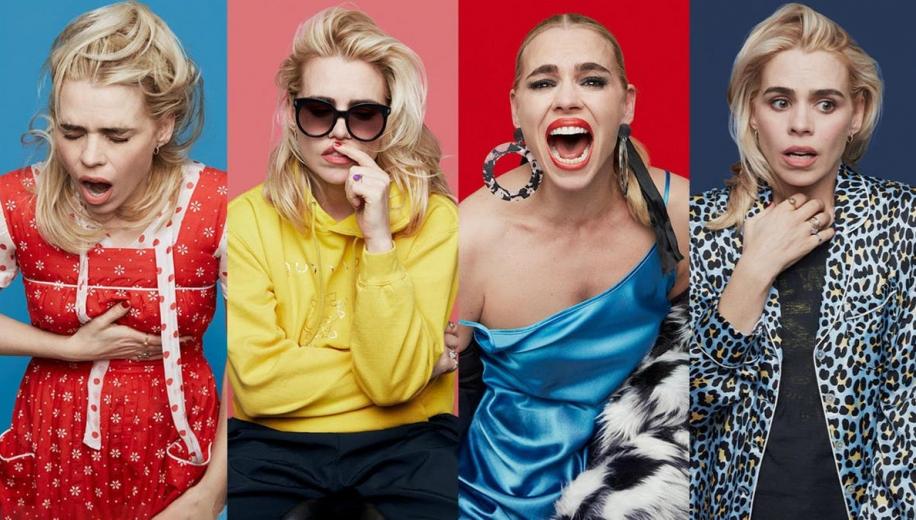 Billie Piper stars in a sharp, topical and joyously chaotic drama about the perils of modern female celebrity.

The story goes that when writer Lucy Prebble (of Succession and Secret Diary of a Call Girl fame) tried to shop I Hate Suzie, multiple networks turned her down, having already filled their female-led quota. Thank God, then, for Sky Atlantic, who have blessed us with a witty, sharp, searing, shocking, knowing and just generally brilliant comedy-drama that reminds us once again that Billie Piper is a true national treasure.

Piper is Suzie Pickles, a former child star turned celebrity who has just been offered her dream role by Disney, and is then suddenly plunged into the abyss of realising that she’s been hacked, and nude photos of her are circulating the internet, ready to explode her life.

The first episode introduces us to Suzie’s life – she’s married to Cob (Daniel Ings), has a son Frank (Matthew Jordan-Caws) and lives in the country – before swiftly shattering it. As she prepares to welcome (begrudgingly) a whole army of people into her house for a photoshoot, she discovers that there’s been a hack, and intimate photos of her are about to be released for the world to see. The episode is brilliantly nerve-wracking and nauseating, creating a palpable sense of claustrophobia as Suzie numbly moves through her house dodging stylists and trying to carefully disconnect her family from the internet in a futile attempt to salvage their normality.

Suzie’s best friend and personal wonder woman agent Naomi (Leila Farzad) arrives on the scene, surveying the damage before her like the Titanic’s captain. She’s got little time for Cob’s dismay at first, telling him “I’m sorry the world’s seen your ****, but also **** off, slightly”. That’s before Cob suggests, gently, that neither Naomi nor Suzie have seen the photos in question. It soon transpires that the male appendage Suzie is posing with doesn’t belong to her husband.

The following seven episodes are absorbing, each displaying a different stage to the process of dealing with a monumental ****storm of this nature. Prebble’s writing is superb, skewering the ways in which celebrities (particularly of the female variety) are expected to exist and behave in the wild. It’s a real insight into the ways in which internet culture affects real people, a sobering look at the paper-thin construct of celebrity, and a damning indictment of the way any form of ‘unruliness’ is shunned by all of us as a whole.

Cob is beautifully played by Ings as a man with no shortage of anger and frustration who rails pointlessly against the ridiculousness of his celebrity marriage. Then there’s Frank, a constant reminder that Suzie’s actions have consequences – brilliantly played by Jordan-Caws, a deaf actor, with Frank’s deafness not factoring in as a cheap plot device at any point. Farzad, as Suzie’s agent Naomi, is a revelation. Naomi is a bisexual woman of colour in her “mid to late thirties” wondering if she wants kids – and is never for a second offered as a caricature or stereotype, nor is she presented as anything other than a real, relatable character.

Piper is unbearably brilliant, pushing Suzie to the fraying limits of likeability. From the first episode where we follow her into the toilet for a stress-induced diarrhoea bout, to the series’ final scenes of heart-breaking desperation, it’s a true star performance. We’re never meant to love Suzie, but because it’s Piper we can’t help but like her, even when she makes head-bangingly unwise decisions and pushes away those who are trying to help her. Suzie is so many celebs we’ve been forced to think of as vague friends, people we claim to have no interest in and then follow incessantly around the dark holes of the internet.

It won’t, by any stretch of the imagination, be for everyone

Clearly, this is in no small part similar to Piper’s real life, which is sort of why it works so well. The story of child star turned gossip column fodder turned ‘real’ actress is literally Piper’s storied history, and though clearly this informed her performance and brings in elements of plausibility to the narrative, there’s never a sense that the story is forced or too on the nose.

There are moments of great comedy, affecting pathos, and the occasional weird moment (the close of Episode 1 sees Suzie break out into song, for example, a trope which isn’t picked up again in the series). It’s this sort of risk that makes I Hate Suzie such a compelling watch. It’s highs and lows – things like this impromptu musical number coupled with bits of dialogue that manage to be both realistic and ingeniously dramatic (I’m thinking here of Naomi’s pod date and the Sapiens discussion).

It won’t, by any stretch of the imagination, be for everyone. But a legitimately interesting show – with a year-best lead performance, a handful of star-making supporting performances and a real thing to say – should be celebrated and consumed with glee, just as leaked celebrity nudes would be. Only with this, you’ll feel a little bit less ashamed.