I Give It a Year Movie Review

Everyone tries to make the best of it. 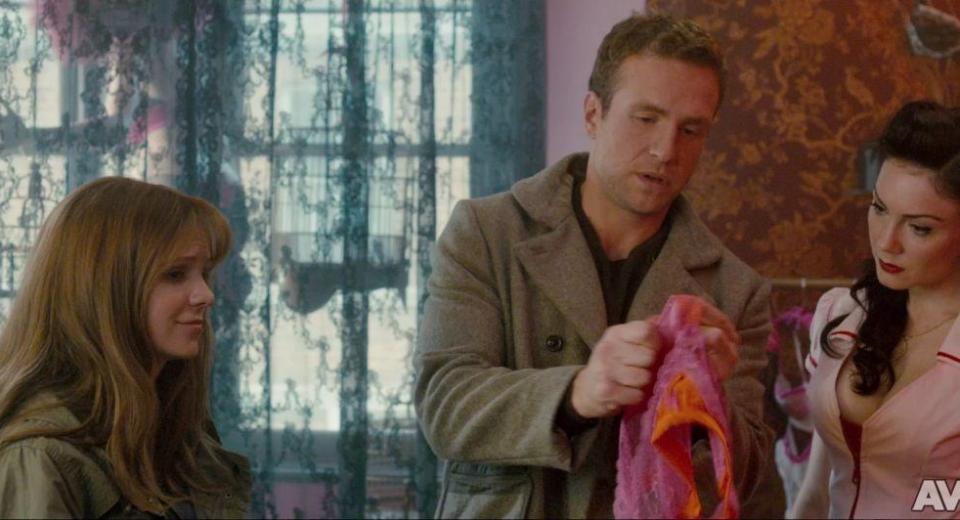 British Rom-Coms have become something of an institution over the years, and this one was keenly anticipated. A shame then, that it fails to live up to the high standards we have come to expect.

Rafe Spall and Rose Byrne star as Josh and Nat, something of an odd couple. Their whirlwind romance has led to marriage after just seven months, and none of their friends think it has much future, hence the title – I Give it a Year. The phrase is muttered by Nat’s older sister – Naomi (Minnie Driver) at the end of the wedding and sets the scene for the rest of the movie. The wedding is not going smoothly, what with the coughing, choking vicar and an incredibly tasteless best man’s speech, but everyone tries to make the best of it.
Skip forward nine months and the story develops into a series of flashbacks, as Nat and Josh discuss their marriage with relationship counsellor Linda (Olivia Colman). It is soon clear that the first nine months have not been easy, once the honeymoon period was over and as we all know, a marriage built purely on passion is doomed to fail, unless some other dimension is involved.

So, with a reasonably simple premise, we have the basis of the movie – two people who do not quite gel, or should that be click? A fair degree of fleshing out is therefore required to make more of a story and this takes the form of the supporting cast. Josh’s parents (Nigel Planer and Claire Higgins) are passionately and embarrassingly romantic, even after a zillion years of marriage, while Nat’s (Jane Asher & Terence Harvey) are somewhat more conventional middle class people, more likely to host a cheese and wine party than show any outward sign of affection. Josh’s best friend is the hideously immature Danny (Stephan Merchant). Not only does he deliver an appallingly bad taste wedding speech and terribly contrived novelty wedding dance, but he also manages to drive a wedge between Nat and Josh at their very first dinner party. Josh’s other friend we meet is his ex – Chloe (Anna Farris). She cleared off to Africa as a charity worker for four years, but it is clear to everyone she still holds a candle for Josh. Nat’s friends are much more work orientated, ranging from the blokeish Clare (Kerry Howard) to the condescending Helen (Daisy Haggard). Neither of them think Josh is quite the catch that Nat believes, but they almost keep their opinions to themselves.

Olivia Colman is hugely entertaining as the counsellor, being incredibly hostile to Josh and off hand with Nat. I do have something of a soft spot for her dry sense of humour, and her character here allows her to exploit this to a certain extent. Rafe Spall is another fine actor, but this is not his finest hour, obviously trapped inside an uncomfortable character. One of the main issues with this movie is the bawdy comedy. We are all used to a bit of swearing, but the sheer amount of poor taste jokes gets a bit wearing after a while. Most of them revolve around Stephen Merchant and it goes to show he is a much better writer than actor, with far too many laboured punch lines and poor comic delivery. There are some genuinely funny scenes – witness the charades scene, but it starts to feel like a bunch of set pieces all cobbled together with a story of sorts.

American solvents magnate Guy (Simon Baker) is everything that any middle class young woman could hope for. He is rich, charming and most of all, available. Nat hides her wedding ring from him and puts up with his flirting, telling herself it is just to win his business, nothing more. Josh on the other hand is finding himself drawn closer to old flame Chloe, figuring out what he missed about her and re-discovering her charms, so to speak!

Where can it all end? Will they survive the year, because if so, everybody tells them it will probably last a lifetime, but is it right for them? I suppose the ending is charming, if predictable, but unlike some other rom-coms, I felt no wish for the story to continue beyond its movie ending. Give it a year? I gave it a chance.