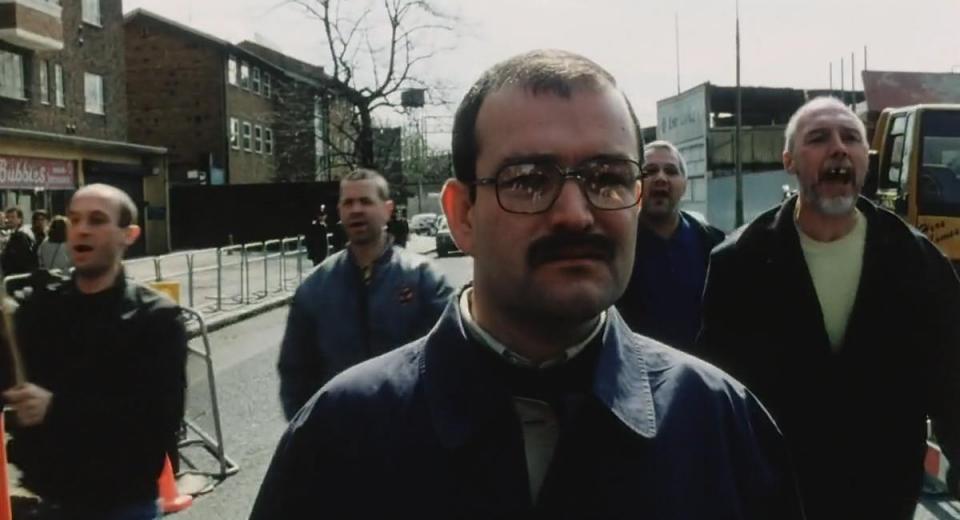 The disc presents a theatrically correct widescreen 1.66:1 1080p transfer using the AVC MPEG4 codec and is Region locked to B.

There is no question about it, even taking into consideration the source material and low budget, I.D.’s launch onto Blu-ray is not a pretty one. As soon as the film starts up you know things aren’t going to be great, there is a horrible grey mess in what should be a black background, brightness fluctuations and print damage conspire to add more misery because the picture doesn’t get any better from here.

Detail itself is rather poor, skin texture is reasonably well defined with pores and hair/stubble having some prominence; clothing weaves themselves, particularly that of denim, look quite sharp and textures such as the wooden bar, or brickwork, or individual smashed glass shards hold ok edges, but don’t be fooled, this is not much of a step up over a standard definition DVD.

Colours are somewhat muted, there are no distinct or bold primaries on offer, but rather understated hues; the yellow of the Shadwell’s scarf comes off as a dull mustard rather than anything vivid; greens have very little lustre and blues are very thin. No wash or bleed though, so that’s something positive.

Contrast and brightness are set very poorly, giving rise to some shocking blacks, in fact there is very little black at all, just a rather murky dark grey that hides all the shadow detail, meaning that this already dark picture looks even more gloomy with nothing to give any depth or sparkle to the picture. Contrast fluctuates throughout meaning the picture brightens and darkens in the same scene (a limitation of the source rather than an encoding issue, but it still looks bad).

Digitally there are, thankfully, no compression problems and little edge enhancement was spotted, though there is a predominance of grain throughout, so those sensitive to such things should beware, but those of us who feel that this organic process be persevered may still be overwhelmed in places. There is very little to recommend in this picture, all of the hallmarks of picture excellence are missing, but it does have the ‘dirty, gritty’ feel to it and this dark and murky picture does somehow fit the underworld it’s trying to portray; whether that is by design or happenstance is, perhaps, an enigma. It is better than previous DVD releases and it is high definition but sadly it is not a great advert for the format. This comes in two flavours, the original 2.0 stereo or a remixed dts-HD Master Audio 5.1 surround track, which is the one I opted for. The front three speakers carry the majority of the surround track; there is fair separation but few effects to speak of. Dialogue is clear and precise, but is somewhat ‘thin’ by modern track standards, though there is a fair amount of naturalness to the speech, but little to no directionality. The surrounds pipe up sporadically to fill the more atmospheric instances, such as the match games, where crowd singing, taunting and cheering fills the room, not particularly dynamic but a good range at least feels like you are in a crowd. Will Gregory’s score makes the best of the surround environment and takes the brunt of the bass with his eclectic music swelling the speakers to the most fullest. Bass itself is very limited with no LF effects to speak of, just a filling in of the main track. It’s a basic track that gets its information across without thrills or spills. None. For such a cult classic to be released on a brand new format with no extras is a real shame, even the DVD had a trailer. I.D. is actor/director Philip Davis’ examination of football hooliganism, which proliferated in the late eighties and early nineties in Britain, and the efforts the police went to, to try and curb the civil unrest that such violence left in its wake, by delving deep into the psyche of an undercover police officer who loses himself within the mob mentality. Lauded upon its release and wearing its ‘cult classic’ status proudly on its sleeve, I.D. makes for some very compelling viewing. With uniformly excellent performances throughout and a witty, direct and hard hitting script the film peels away the veneer of performance under pressure and takes a look at those that put themselves on the front line. Based, in part, on actual cases, but taking a huge amount of dramatic licence with regard its characters, I.D. remains a powerful examination of how easy it is to lose oneself when surrounded.

Whilst the film itself comes highly recommended this Blu-ray release from Anchor Bay leaves a lot to be desired. Ok the film was shot on a tight budget and is of small production values, but there is little excuse for such a shoddy looking picture; which is a dark grey mess with little to no punch, depth of vibrancy. The surround track does its best to liven up the proceedings and does add some nice atmospheric details, but on the whole it is best described as a functional track. Add to this a complete lack of extra features and you have a set that is totally reliant on the film’s reputation to make a sale. Thankfully it has that in spades!