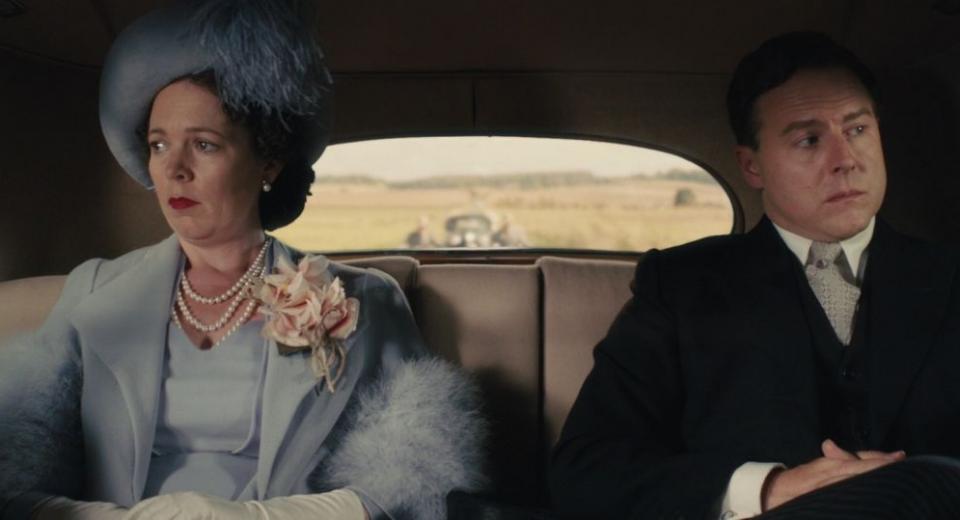 Filmed digitally in 2.35:1, this AVC-Mpeg transfer looks very good indeed. Although set in America, all principle filming took place in the UK, mainly in or around the Getty Estate in the rolling Chilterns. Permission was not gained to film at the Roosevelt home of Springwood in New York State, so a few green shutters have been added to an English country house to give it more of a colonial look. Daisy’s clapboard house looks entirely authentic and the rolling hills are suitably anonymous to be either side of the pond. The main omission is therefore the Hudson River, as the budget did not permit for this to be constructed, but this is hardly a big issue. The vehicles are all of the correct era, with FDR’s modified Ford Phaeton lovingly recreated, right down to the hand clutch and brake. All this adds up to create a detailed and largely accurate backdrop to set the action against.

The only problem with shooting digitally is that there can be a propensity to rush the lighting, as the director can look at the field monitor and see what the shot looks like directly from the camera, rather than having to rely on the DoP and lighting team to deliver the shot, without seeing the results until the rushes are viewed the following day. The end result of this is that sometimes the lighting is not as intense and finished as it could be. Peering at a 20”, probably not optimised monitor, with ambient light spilling onto the screen is no substitute for years of experience and careful metering of light sources. On the whole, exposure and lighting look pretty good, but there are a few scenes, where the image has been processed from day into night that look a little ropey, as well as a few glaring errors, where a window shows a brightly lit day, but the scene is set at night! In terms of brightness and contrast, the shots all look and feel just right, with plenty of low level detail and no solarising or banding evident. As one comes to expect from digital work-streams these days, edge enhancement and digitising nasty’s are all absent, although the overall look of the film is a little too soft for my liking. Colour palettes are more towards the browns and greens, with warm whites and good skin colour.

There is very little CGI – just the odd fake moon and occasional tidying up of errant crew or backgrounds, so it all looks very natural and lifelike.

In-car shots have utilised wide angle lenses and positioning the camera operator in the car quite often, so depth of field sometimes creeps a little too wide and some distortion is evident in the extremes of the frame, but the fast motion of the shots minimises any distraction this might cause. Not the sort of movie you will be impressing the neighbours with, but extremely watchable all the same.

The Brits still take quite an old fashioned approach to surround mixing compared to our more brash American cousins, and don’t even get me started on what Bollywood is doing with 5.1 now! This sort of film demands a light touch in the sound design department and it certainly got that. Dialogue is always clear, although nailed to the centre channel at all times, while the surround yawns and wakes up occasionally to give some ambience or orchestral swell to particular scenes. The LFE gets used to any extent about three times during the movie, but baring in mind the sound track and film genre, this is only to be expected. What is sorely missed is some of the background clutter that adds an extra dimension to busy scenes. With twenty or so servants setting up for a big dinner, a decent sound design will leave you almost smelling the soup bubbling on the stove, or tasting the metallic tang of the silver polish, but here, the mix steps politely away to concentrate on the central action, leaving the extras to polish, cook and flower arrange in muted near silence.

The DTS-HD MA 5.1 stream is devoid of anything that will stretch your sound system at all, so don’t expect fireworks. It is also a little quiet compared to some movies, but at least that prevents any noticeable compression from sneaking in.

The music score is a fine mixture of period songs and a more modern orchestral under score. This does sound very warm and fluffy and about as inoffensive as you can get. Truly, a thirty year old Amstrad stereo system could reproduce this without breaking a sweat. I think this is a good thing, as it makes listening to it a stress free experience, but again it is not something to show off your system with – unless of course, your pride and joy stereo was thrown together thirty years ago by an outspoken computer salesman…

Once we have sat through the trailers (again and again if you stop the movie, as the resume function is not correctly implemented), we get to the movie menu proper. Actually, before we do, let us return to the trailers for just one minute. We get a Les Miserables film trailer, complete with cinema release date instead of the Blu-ray – preceding this release by some six months, and a standard definition trailer for Mr Selfridge with an end slate knocked up on a Commodore Amiga in a hurry, or at least so it appears from the amateur nature of the imagery. Moving on.

The menu is standard Universal, with their usual screen saver and quite a conventional and easy to use layout. Extras are quite limited though.

First up, we have the deleted scenes. These are all pretty much completed and look very nice. This is followed by a fairly pointless theatrical extended trailer and then an unusual spoken diary by director Roger Michell with a still image accompanying his words. This is basically a monologue detailing the first days filming and the trials there associated. It’s different, which is about the best one can say about it. It might have worked somewhat better with a collection of production stills, but maybe these were a little thin on the ground, given the low numbers of iPhones and other camera equipped devices one sees around film sets these days.

The commentary by Michell and producer Kevin Loader is quite interesting and worth a listen for some background info on the film making process. How else to bore ones friends about locations or write reviews with some level of background information?

It would have been very easy to sensationalise the background material and make a huge deal out of a philandering president and his bi-sexual wife, but instead, we get a grown up, gentle movie, concerning itself with the story of a young and inexperienced King and Queen visiting America for the first time and the social and cultural gulfs between our two great nations. The pace is sedate, never getting above a canter, but the setting and storyline make this entirely fitting. There are some moments of humour, but these could have been exploited a little more, giving more of the organised chaos that no doubt would have surrounded the visit of a monarch to an otherwise quiet country mansion. This movie is never going to set the world on fire and indeed, might well have made a better stage production than a movie.

Technically, there is nothing here that is terrible, just lots of components one might describe as average. The cinematography is quite safe and well crafted, but the sound is a little too laid back, making very little impact. The extras are well, fine, but again, nothing spectacular. It all adds up to an unassuming movie that some will enjoy as an historical biopic, but for me, it fails to ignite and just feels too pedestrian and safe.