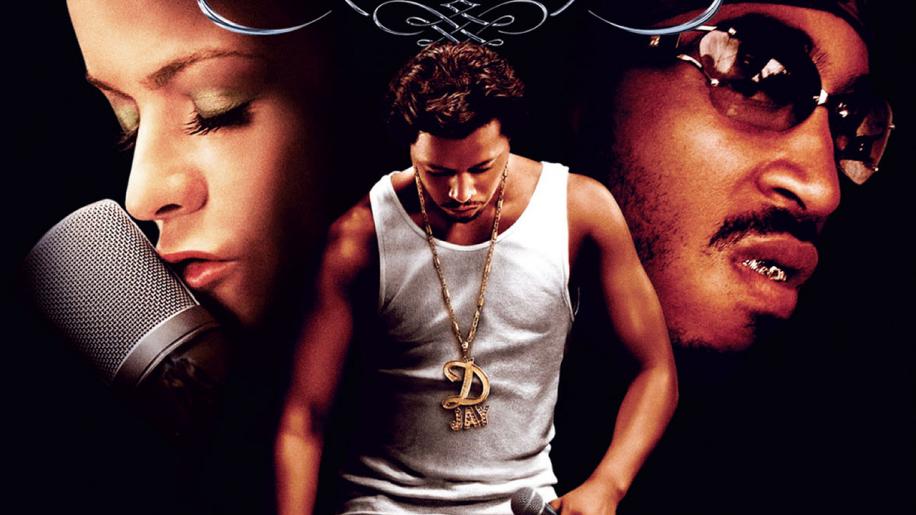 Hustle & Flow was a film I'd heard much about, partly due to the buzz caused by its undoubted star, Terrence Howard, in both this and Paul Haggis's “Crash”. The film has been nominated for and has won countless awards culminating in Howard's Best Actor nomination and rap ensemble “Three 6 Mafia's” Oscar win for Best Original Song with “It's Hard Out Here for a Pimp”. Amusingly this led to Oscar and “The Daily Show” host Jon Stewart stating “Three 6 Mafia 1 - Martin Scorcese 0!” in the Oscar stakes.

However, when you hear the premise of this film - a low life pimp trying to better himself through rap music, you may think that you've seen all this before. Up until now, Eminem's 8-Mile was supposedly the best example of this genre of movie; but Hustle & Flow is simply brilliant and is a must see whether you are a fan of rap or not as the fresh and strong story is at the heart of this movie.

D-Jay (Terrence Howard) plays a Memphis pimp who spends his days hustling his girls and dealing weed while griping about his dead end lifestyle and how he wishes it could be better. His home life is not much better as work goes home with him as he shares his residence with prostitute Nola (Taryn Manning), stripper Lexus (Paula Jai Parker) and pregnant and not working Shug (Taraji P Henson). After getting hold of a Casio keyboard in exchange for some pot, he is motivated to write down what's in his heart through some rap lyrics. He then runs into old school friend Key (Anthony Anderson) who happens to be a small time sound engineer. He persuades Key to listen to some of his lyrics and help him to put together a demo tape. He agrees and with the help of a skinny white kid, Shelby (DJ Qualls) to help lay down the tracks, they build a makeshift recording studio and get to work. All of this is in the hope of getting the demo to Skinny Black (Ludacris) a local rapper made big who will be returning home to Memphis for the 4th July celebrations. Will D-Jay be able to successfully hustle Skinny Black or is he destined to continue leading a hard life as a pimp?

Although this is an oft told story, it has surely never been told with such an outstanding cast. Every performance is excellent with each actor neatly contributing to the tale. Howard is fantastic and completely lives and breathes the pimp he is portraying, yet still manages to get us to care and root for him despite his faults. It is no coincidence that so many awards and nominations have gone his way. He is ably supported by Taryn Manning as Nola, a white trash hooker who is also desperately trying to find something better for herself and wants to take charge of her life. Anthony Anderson as Key once again shows that he can really act, building superbly on his great recent performances as Antwon Mitchell in FX's “The Shield” Of all the supporting cast however the standout has to be Taraji P Henson as the pregnant Shug. She delivers a sweet and compelling performance vital to D-Jay's success and is perhaps the only person who sees him without his pimp mask. Special mention as well to Isaac Hayes and rapper Ludacris who have relatively small roles but especially impress. I am a fan of rap and hip-hop but freely admit that I was sceptical when “Three 6 Mafia” won their Oscar. Sure it was a catchy track but no more than that. However when heard in the context of the film it is pretty evident why it was successful. Never has a song been so integral to a movies story and its eventual success.

Ultimately though it is Howard's movie and he along with director Craig Brewer have managed to take a clichéd story and turn it into something fresh and original. Highly recommended!