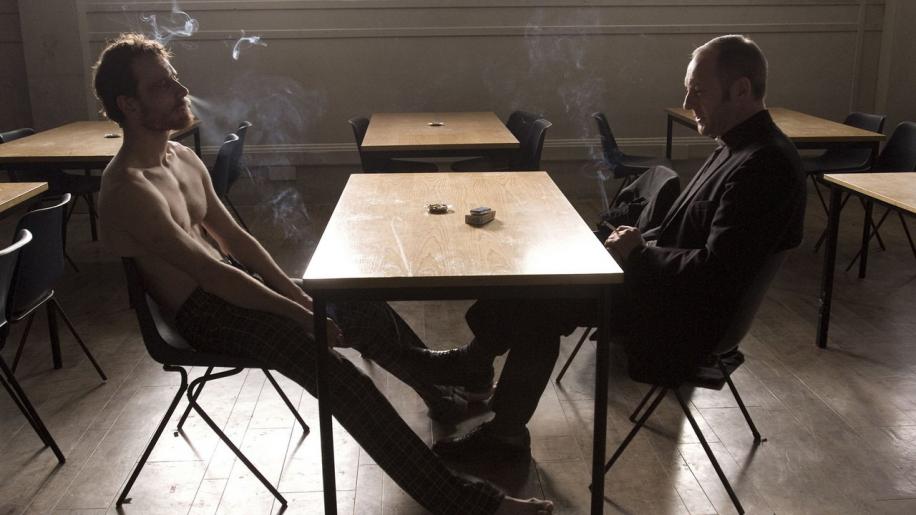 'Hunger' was released in 2008 and was written and directed by Steve McQueen. Obviously not the legendary 'Bullit' actor, this McQueen is in fact an artist but not in the traditional sense of the word. He specialises in the artistic projection of his films onto one or more walls; these films involve subject matter such as two naked men standing across from each other and exchanging glances! This movie marks McQueen's first feature production and he's chosen some very delicate and powerful source material. The topic in question is that of the infamous hunger strike which took place in the Maze prison in Belfast during the height of the Troubles. Following the implementation of internment without trial in the early 70's, the British government went about locking up hundreds who were suspected of paramilitary activity in Northern Ireland. There was no trial for these men (guilty or not) and the average term was eight years. This movie takes up the saga of the Troubles circa 1981 and tells the tale of one of the most famous IRA members, Bobby Sands.

The setting is the harsh and stark environment of the Maze prison in Belfast. We are introduced in the opening scenes to a young man named Gerry Campbell, who has recently been arrested under suspicion of partaking in terrorist activities. He states that he is a political prisoner and refuses to wear the prison uniform; he requests to wear his own clothes, even though he looks decidedly unsure of himself. The warders' exchange knowing glances and as Campbell strips to his birthday suit he receives a single blanket and a vicious clout on the head for his insubordination. Manhandled to his cell, he meets the man with whom he will spend the next six years of his life, Bobby Sands.

Campbell examines his cell and realises that the walls are caked with Sands' own excrement. It has been methodically applied to every available surface, with a plasterer's patience. Sands, like his new cellmate, is also wearing nothing but a blanket, even though the temperature inside the filthy cell is well below freezing. A couple of months pass and, realising that four years worth of dirty (and blanket) protesting has done nothing to improve their Special Category status, the order is given to begin a hunger strike. Although this had been attempted several years previously, the plan for the first strike was flawed; each man began nil by mouth in unison and all became too weak to carry on the fight and had to stop. This time things would be different, as each man would stagger their refusal to consume, with seventy five volunteer prisoners waiting in the wings to replace any of their fallen comrades. Sands was the first to begin (on the first of March 1981) and he was openly willing to die for his beliefs.

Sands died at the age of twenty seven after sixty six days of hunger striking. His demise in the movie is harrowing and disturbing, grimly capturing a man slowly deteriorating as his body begins to consume itself and eventually shuts down completely. Nine men died in total during the Maze prison hunger strikes and Sands was the first. I'm not a political person by nature but it's an emotional experience to witness what one patriot did for his country. I personally was not affected in any great way by the Troubles (even though I live a few miles from the border) but this is a subject which is very close to home. I spoke to my parents about this movie and they told me that the next man who was on the list of those ordered to sacrifice themselves by the horrific method of starvation lived a few doors down from a previous family home. This, for me, brought a huge gravity and meaningfulness to 'Hunger'. While it might not be a movie that impacts everyone in a similar fashion, it is without doubt both a very powerful piece of film-making and a master class in cinematography and direction. Unlike many other Hollywood productions you can see the effort which went into making this piece. McQueen provides an exemplary example here of a real craftsman and artist at work. Each shot is meticulously planned and the overall flow of the piece is perfect. There are many scenes which caused my jaw to drop slightly, be it as a result of shocking scenes of brutality or depravity. Some of the imagery is presented as a lengthy still and this just adds to the impact. In saying this, there were a couple of sequences that seemed a little too “arty-farty” but this is just a personal preference and I'm sure that many will find this movie a beautiful thing to behold in its entirety.

Sands' beliefs were unshakable; his refusal to surrender and wear a convict's uniform and the willingness to die for his cause and leave his young family behind really says it all. However, with regards to political statement, his death was not in vain; a huge surge in IRA recruitment and activity occurred shortly after his funeral. He was also elected to British parliament during his time in prison but the rapid introduction of the Representation of the People Act in 1981 prevented any of the other hunger strikers from making it to office. His death also had an impact in many countries around the world (such as the USA and Cuba), with many governments protesting over the treatment of political prisoners in the Maze (even The Grateful Dead paid tribute to Sands!). The scenes of the prisoners engaging in dirty protesting as rivers of faeces/urine flow through the corridors of the Maze is the definition of depravity. The fact that it was all self inflicted makes even more of a statement and this really is a movie about one man's patriotic sacrifice.

Relative unknown, Michael Fassbender, plays the role of Sands. He has had minor roles in television shows over the years and also played a part in '300' but this is his first starring role. He is absolutely stunning here and deserves the accolade he has received following the release of this movie. With such an emotional and powerful central performance, Fassbender is set to follow in fellow Irish thespian Colin Farrell's footsteps (and also seems to have a whole lot more acting ability). Stuart Graham, another actor who focused on television productions before making his big screen debut here, also puts on a very strong performance. His character projects the role which the prison guards played in the story of Sands and Graham does a fantastic job here with body language and expression. Veteran Irish actor Liam Cunningham also puts on a magnificent (but short lived) performance playing Fr. Moran, who holds a wonderfully captivating and intelligently written conversation with Sands, as the two duel for the moral high ground. This scene was in fact carefully practiced over and over by Fassbender and Cunningham as they only had one twenty minute slot (due to the fact that the location for the scene was on a busy train route) to nail the most interesting and intimate scene in the movie. The supporting cast, like the lead actors, convey a range of emotions with simple sideward glances at each other and are collectively flawless; obviously this is McQueen's influence at work. All in all there's not one actor who puts one foot wrong for the duration and form a very tight cast. And, most importantly, all nail that tricky Belfast accent to a tee, which is crucially important for authenticity (unlike Tommy Lee Jones in the truly awful 'Blown Away').

Although this is the second movie to portray Sands' life ('Some Mother's Son' covered the story in 1996) McQueen's efforts here are superior and his vision clearer. The movie effortless skips through the timeline of the final years of Sands' incarceration. The precise timeline is unexplained but the lengthening hair and other events give good indication. There is little or no dialogue for the first forty or so minutes, with McQueen letting his carefully crafted imagery do the talking. The majority of spoken words are included in the aforementioned scene involving a clever battle of conscience and belief between Sands and Fr. Moran. Following this exchange, dialogue once again becomes scarce as we follow Sands' journey to the end. While I'm not a fan of this type of delivery, the directors unwavering vision and obvious passion keeps the entire presentation tight and interesting. It really is refreshing to find a British director who can break boundaries and this release reaffirms UK cinema's place on the movie map. It's clear that this movie was a labour of love for all involved and the end product certainly does the effort which went into its creation justice. This fact was cemented in Cannes earlier this year, with McQueen deservedly receiving the Camera D'Or prize for first time directors and the movie received a host of other minor awards. Highly recommended.