Will it sound as thin as it looks? 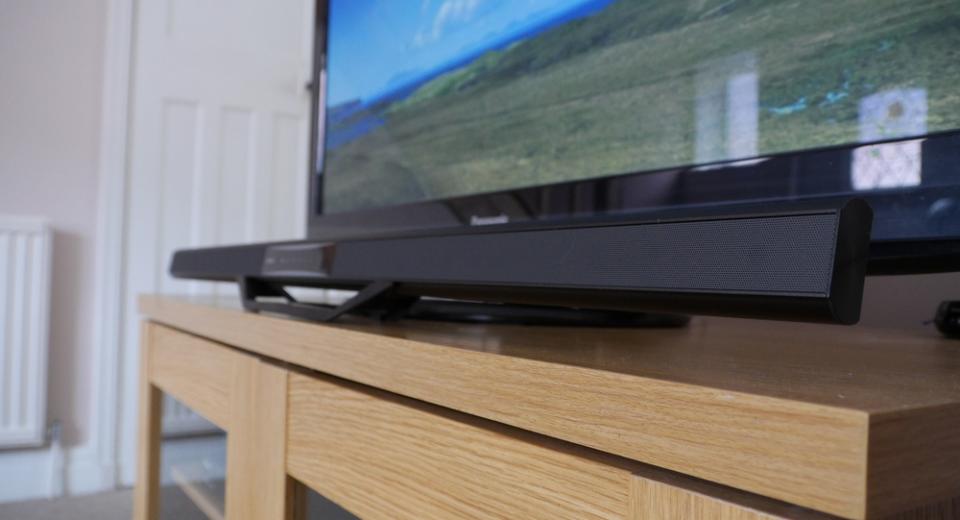 We know Humax is a company highly capable of producing excellent PVRs but they are very new to the audio market.

It shouldn’t be surprising that they’ve chosen the soundbar as a market sector ripe for exploitation, however, as just about every man and his dog has one to offer, in one shape or another. So how are Humax going to make their mark in such a competitive space? Well, they are aiming to do so by making their products anything but stand-out in order that they are the epitome of discretion.

Their very first Soundbar, the Humax STE-1200 BSW, was billed as the smallest soundbar on the planet and the STE-1000 BSW is even more compact so presumably takes on that mantle. We’ve certainly not seen anything quite so slimline before and there’s obviously the concern that the dimensions will impact on the performance with such tiny drivers equipped. So do they?

This is not so much a soundbar as a soundblade. In fact, rounded edges aside, the size of the STE-1000 would see it serve as an excellent hand weapon. Not that we’re suggesting you should purchase it on such grounds, we’re just trying to highlight just how slender it is but it does carry a bit more weight in its aluminium housing than appearances would suggest. Said casing is styled in charcoal grey and front-centre is a display panel providing feedback on input selection, volume adjustment and sound-mode operation.

In case you hadn’t got the message, the STE-1000W is seriously small. With a depth of less than 3cm and a height of about 5cm, you could easily forget it is there and, save for a rather annoyingly bright red indicator light, we frequently did exactly that when viewing late at night. The included table stand raises the height to nearer 6.5cm but, even then, the chances of it obscuring the bottom of your TVs screen or infra-red sensor are negligible, and that’s a good thing. The bundled subwoofer unit is obviously a bit more bulky but it’s still compact by any standards. It takes the tape at just 265 x 200 x 270mm (HxWxD) and features a port at the front, just under the Humax logo. The sub is passive and therefore requires a wired connection to the speaker bar and its cable length is three metres so you’ll need to plan for that as a maximum distance away.

In fact, it’s only the presence of cabling that takes away from this most living-room friendly of packages and we’d like Humax to explore the idea of some kind of wire tidying mechanism with their next effort. The inputs are all at the back of the bar and a little fiddly to get at but since there’s only a toslink digital and 3.5mm aux as options, you won’t have too many unsightly wires to conceal. You also get a Bluetooth connection for your smartphone, PC or tablet if you fancy streaming some audio to it.

So thin it's nearly not there

Part of the appeal of the soundbar is in its simplicity for the end user. You don’t really need any special skills or tools unless you opt to wall-mount and, even then, this is achieved very easily using the supplied bracket and Humax provides a paper template in the box to make life even simpler. Humax also supplies the necessary optical and 3.5mm cabling to hook yourself up, with the former generally providing the better alternative from a sound quality standpoint. The display panel isn’t terribly helpful unless you’re right next to it as the icons and text are printed in a very small font so it’s difficult to make out exactly what’s what from any kind of sensible seating distance. It does double as a control panel, however, with touch-sensitive buttons to affect volume, inputs and sound modes. Naturally you will probably want to accomplish all that from the comfort of your armchair or sofa, too, for which you’ll want the supplied remote control which is actually rather nice and much better than many provided in the same price bracket.

There’s not much to discuss here. This is a fairly basic package but, as we said above, you do get Bluetooth which is of the version 3 variety and doesn’t have support for aptX. Whether the STE-1000W is up to the task of highlighting the inferiority in the streaming codec remains to be seen. One thing the package definitely can’t do is decode multichannel audio and you’ll noisily be reminded of this should you try to feed it such by a loud and irritating sound which signals the incompatibility.

Everything you need is right inside the box

If you want an inexpensive, simple, elegant and incredibly discreet solution to the question on how to improve upon the likely feeble output of your TV's speakers, then the STE-1000 makes quite a bit of sense. Provided you don’t have an up-to-date flagship TV with a decent set of speakers equipped, then it will definitely be better than what you have, with the clarity of dialogue probably the most noticeable enhancement. For everyday TV watching, we found the Humax a very solid companion lending weight and authority to effects and pepping up any music present in the audio track with decent clarity. You could pretty much say the same when it came to taking in a movie too, although some of the low frequency effects present in a multichannel presentation will see the rather limited abilities of the subwoofer highlighted. It can all get a bit murky and unrefined and the included Bass mode only exacerbates that

It’s with music as a sole medium where the weaknesses of the package become most apparent. If there’s a track you’re really familiar with that you’ve heard through anything approaching a reasonable quality speaker, you’ll know instantly that the STE-1000W carries no real mid-range capabilities to speak of. Worse than that, some of the lower frequencies that you would normally expect to be offloaded to the subwoofer, in such a package, are attempted by the teensy drivers in the speaker blade and that really doesn’t end well.

We routinely throw the complex bass synth of the opening bars of Pale Green Ghosts at these products to get a line in the sand idea of how they will handle music but rarely do they fall so short as the Humax, which really couldn’t present any of the detail and it was reduced to producing an incoherent series of noises only roughly approximating what most would consider as music. It does OK with more simple fare and can sound acceptable for higher pitched, electronic music but if you’re looking for a solution encompassing musical duties, you’d be better served elsewhere.

Given the right marketing and point of sale treatment, we can see Humax shifting an awful lot of STE-1000 packages. It’s sleek almost to the point of disbelief and is priced well under the ‘magic’ £200 barrier. It also carries enough connections for most, with a digital audio in, Bluetooth and a stereo 3.5mm jack. The supplied remote is also one of the better examples in this price category of soundbar packages.

In terms of the audio output, we’ve definitely heard better but we’d expect the STE-1000 will more than satisfy the market for which it is intended and it’s reasonably deep and convincing bass allied to very clear dialogue will certainly provide an upgrade over your TVs built-in speakers. The downside of the speaker bar’s slenderness is felt in its lack of mid-range presence, which is most keenly felt when listening to music.

For everyday TV and movie viewing, the Humax STE-1000 BSW gets the job done and if you’re after the last word in understated, it’s definitely worth checking out.