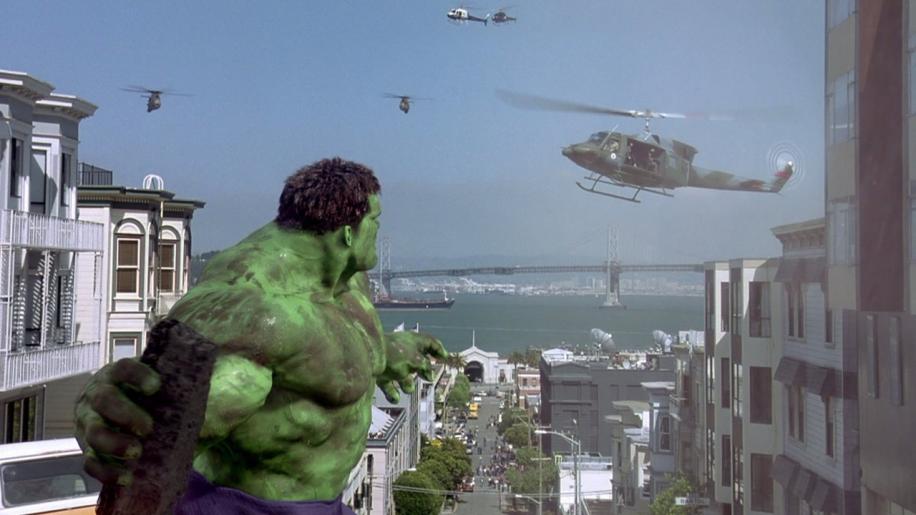 David Banner (Nick Nolte) is working for the American military during the 1960's on a genetic programme to change the human immune system. When he is told he is not to use a human subject for his experiment he decides to inject himself. Banner is soon told by his wife that she is pregnant and the resulting child, Bruce, is passed the genetic flaw. We then meet up with Bruce who is in his teens and we learn that he believes his parents are dead and he is living with step parents. We further fast forward to Bruce at university and working in a lab on experiments which are very similar to those his father had started all those years ago. During one experiment something goes wrong and Bruce is subjected to a huge Gamma exposure which should have killed him. Instead Bruce feels better than ever, just don't make him angry.

Director Ang Lee was an odd choice for this summer blockbuster, but his track record is very encouraging with his work featuring good character development and classy action. He tries hard to give us a character driven drama mixed with blockbuster action and effects. He very nearly pulls it off, but overall I was left bored with the Hulk. It appears as though Lee and his writers have tried too hard to follow the character development with an overall weak storyline and actors who appear bored to tears. Eric Bana has one facial expression which he uses throughout, the beautiful Jenny Connelly is underused and Nick Nolte acts as though he is in a different movie altogether with an over the top and undirected performance.

What is impressive is the effort that ILM have put into the CGI effects, yes some look cheesy and unfinished, but those of The Hulk showing emotion are superbly done. In fact most of the Hulk effects work very well and you soon forget you are watching a CGI character, well until a badly animated scene comes along anyway. There is also clever use of multiple images with fades and dissolves which give the movie that authentic comic book feel with many being very clever indeed.

I can see what Lee was trying to achieve and watching him behind the scenes shows how much he wanted to bring to the screen. You also see that many of his ideas are soon shot down by the producers due to money issues, so maybe he had his hands tied too much? The end result could have been far better than what is on the screen but sadly the Hulk is slow and lumbering, the action sequences seem tired and the film is about 30 minutes too long. If you are a Hulk fan then I am sure this is everything you could have hoped for, but if like me you only have a passing interest in comic character films you may find yourself getting bored very quickly as the movie stalls. I would like to recommend this movie, but sadly it is a Saturday night rental with plenty alcohol on board (and you might hopefully sleep well).