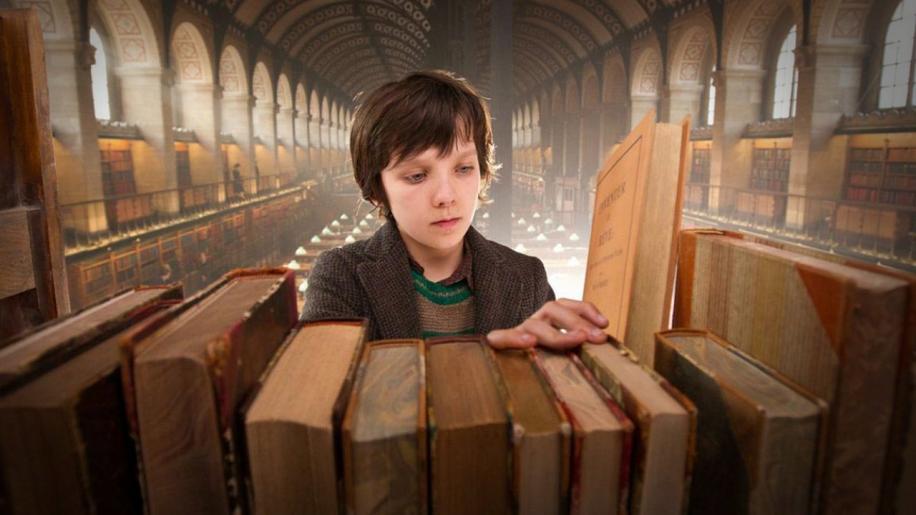 There is something synergistic about a modern film utilising the latest 3D techniques in telling the story of the earliest movie making era, itself pioneering in terms of special effects.  Indeed before I spun tonight’s feature I had no idea what to expect, purposely removing myself from all the hype regarding the film (even its many Oscar nominations, though the wins did not go unnoticed) so it was with that rare delight that I found myself transported in time to an ostensibly  much simpler, but actually just as complicated world, that is both enchanting and sympathetic to discover how loneliness and isolation can be transformed with a purpose, and endear those that initially appear to have one agenda, when in reality they have another, quite different, in what has to be one of director Martin Scorsese’s greatest accomplishments – and that’s saying something!  Let us turn the key and wind up the cogs for tonight’s feature presentation, Hugo in 3D.

All is dark.  A train whistle blows, steam hisses, wheels strain to start – a clock ticks in front, then behind and now all around.  Cogs come into view and dissolve into a city, it’s Paris; zooming closer, through the Gare Montparnasse railway station, in-between passengers as they board and alight, through the steam of the locomotives, up and above the platform towards the clock face, closer still, to the number four; a pair of eyes are watching the goings on.  A swift camera reversal allows a look at what the observers sees, hundreds of people going about their daily routine; but within the many simply trying to reach their destination, there are yet others trying to embark on a journey of a different sort – the station inspector eyeing up the flower girl, the newspaper vendor striking up a conversation with the café owner - worlds within worlds - and all the while time ticks on.  A sumptuous opening to the film which at once introduces us to our main protagonist, the life he leads and the world he inhabits.  He is Hugo, a child of around twelve, whom we learn from flashbacks is alone, living within the walls of the station, keeping the clocks wound and at the correct time – a skill he has learned not only from his clockmaker father, but from his drunken uncle, whose job it was in the first place.  The character is played by Asa Butterfield, who brings that childlike innocence, so prevalent in The Boy with the Striped Pyjamas, back to bear with a performance that encapsulates wonder, drive, loneliness and resolve.  He has large blue puppy dog eyes (brought all the more alive by the colour grading given to the whole film) through which he can convey all the emotion required for the part.  He is desperately lonely, avoiding being caught by the authorities lest he be sent to the orphanage, yet forced to steal food and drink to live.  His goal is to repair a broken automaton; the last thing he and his father worked on together, in the vain hope that it contains a message.  Yet his resolve is deeper still; he imagines the world as a machine, just like the clocks he repairs, and since every machine part has a purpose,  he therefore must also have a purpose as he is part of the ‘machine’.  This heartfelt plea leads to his ultimate goal, that of repair, not of machines, but of people, specifically the toy shop owner, who appears lost and broken.  Such an examination of this emotional core is something quite unexpected in a ‘kids’ film and Butterfield is exemplary in his dealing with the subject matter.

We are introduced to the toy shop owner very early on in the film; Hugo has been stealing clockwork-toy parts from him in his quest to repair the automaton.  However, this fateful morning, he is caught red-handed and forced to hand over the contents of all his pockets, one of which contains a notebook – a notebook that has special significance to both, but at the time neither of them know quite where it will lead to.  For his part Hugo needs the book, his last link with his father, containing as it does the notes about the automaton.  Though there is realisation on the toy shop owners face, and indeed something akin to anger when Hugo refuses to answer his probing questions, we have yet to discover exactly why he is so interested in the book.  And indeed it is this discovery that forms the backbone of the film.  Introduced as Papa Georges, the toy shop owner comes across as extremely aloof, tired and alone, despite surrounding himself with wonderful creations, toys and the like, as well as being married and living with his goddaughter, Isabelle.  There is a profound sense of sadness about the character and actor Ben Kingsley encapsulates this with a weary stoop to his walk and a mournful approach to his eyes.  At first we think this might be to do with Hugo’s constant stealing, but gradually as the layers are peeled back we discover a man who has lost more than most will ever know.  A man who was a creative genius, had the world at his feet, but lost it all in-spite of that success due to a world war that embittered the world.  He now carries the weight of that loss on his shoulders, trying to forget past glories, and eking out the meagerest of existences lost in a station promenade, as the world passes him by – as lonely and forgotten as he himself feels.  The real tragedy is that this character is based on a real person and everything depicted in the film actually happened in what is a shocking revelation.

Hugo gets to meet Isabelle when he follows Papa Georges home as he tries to secure the return of his notebook.  Isabelle is played by the wonderful Chloë Grace Moretz, so violent as Hit Girl in Kick Ass and so malevolent as Abby in Let Me In, here she puts in another magnificent performance in a part that is somewhat different to her previous characters.  Isabelle is a reader, highly intelligent, well spoken and liked by all that know her; especially in the station book store (whose owner allows her to borrow books) and library.  She is, however, somewhat sheltered, never having seen a movie (reasons for this become clear later) and always craving adventure – and it is this latter aspect that drives her to help Hugo, seeing in him something that she has lacking in herself.  It does take a little while for the pair to bond; Hugo is aloof, trying to stay detached lest he be left alone once more; Isabelle slightly distrustful of who she first thinks is just a common ‘thief’.  However a quick brush with the law and deceitful entry into a movie house to watch a film (I adore the symmetry of the film being shown; Harold Lloyd hanging from the clock in Safety Last!; with Hugo doing the same as can be seen in the poster) and the two become firm friends, cemented by the fact that Isabelle has the last remaining piece required to make the automaton complete.  Indeed once it completes its message, the mystery deepens to its origin, what the message means and how it is connected to Papa Georges.  The further solving of this mystery and the discovery of all the interconnecting pieces that weave together to make the layers of this wonderful story are revealed in such a way as to be akin to peeling back the layers of a much desired present; each part enhancing the excitment to reveal a glorious climax.

Martin Scorsese is a master story teller, every one of his films is multilayered and repeat viewings always show up new and different aspects.  He crafts his films with a huge attention to detail, gets the best from his actors and, above all, holds the audience’s attention with a terrific story extremely well told.  In the case of Hugo, he had an already established story from writer Brian Selznick's novel, The Invention of Hugo Cabret, and he, together with screenwriter John Logan, filleted the narrative, drawing out the essential aspects, but kept enough of the subtle nuances to have a fully rounded piece.  As well as the main story drive, that of Hugo and Papa Georges identity, there are other lesser story threads that play out in the background that help to flesh out this world.  The burgeoning romance between the newspaper salesman and the café owner is a typical example.  Played by Richard Griffiths as Monsieur Frick and Frances de la Tour as Madame Emile respectively, these two old pro’s barely have any dialogue but convey their affection through gestures and later their little dogs, in a nod to the silent era about which the film has a great deal to say.  But perhaps it is the Station Inspector’s story that deserves the most praise.  Played with absolute relish by UK comedian Sasha Baron Cohen, the Station Inspector has aspects of the Child Catcher from Chitty Chitty Bang Bang in that he is there to catch runaways and children with no guardians and place them, without trial or mercy, in the hands of the orphanage.  He is in part comic relief and this makes his tragic story all the more heartfelt, especially since, like the main narrative, it builds to its own suitable climax.

As well as the multilayered story, Scorsese surrounds himself with skilled technicians to bring the most to the picture; all the budget is right up there on screen.  A huge amount of practical sets were built, all with his particular eye for detail, which were then augmented by CG, not that you’d know, there simply is no join to see.  Some of the sets, such as the clock tower, or the station are vast in their scope and sheer size.  Robert Richardson a long time cinematographer on Scorsese’s films lensed Hugo, his first, and indeed, Scorsese’s first, foray into the 3D.  Although technically more difficult to work with, the pair have gotten the best out of the cameras and indeed have made the 3D part of the film.  Framing and set design has all be taken into consideration, the 3D budget was considered for all the scenes, enhancing the effect to bring out the scope of the sets, but dialling it back slightly when the emotion is needed for the characters, as such you are subconsciously drawn into the 3D picture, it becomes immersive; you are in this world.  I go into further detail in the picture section, but suffice to say, this is the best use of 3D I have ever seen and it the new benchmark by which to measure the format.  And to go with the spectacular visuals you have Howard Shore’s evocative and emotive score that helps to heighten the picture.  It is a rare moment when picture and sound come together to create something quite so epic – and Hugo has managed a perfect blend.

The film has won, and continues to win, nominations and awards for its excellence – it is truly deserving of such praise.  This is a kid's film, only done by Martin Scorsese; it's unlike anything he has done before and probably unlike anything you’ve ever seen before and I can’t recommend it enough.