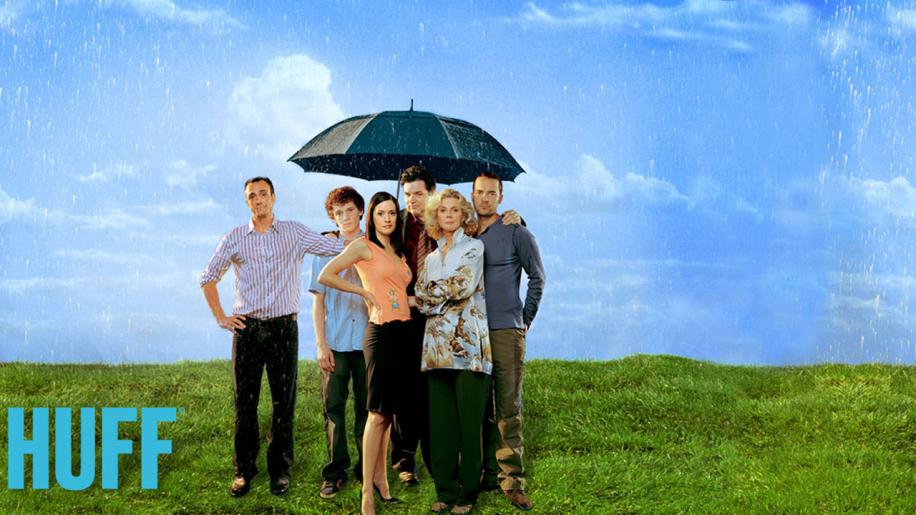 Presented in an anamorphic 1.78:1 ratio and mastered in high definition, Huff provides a very pleasing result in the picture stakes, if not an outstanding one. The image shows a real depth and clarity of detail which really help illustrate the almost cinematic production values of the show. Grain is kept to a minimum for the most part, and unsurprisingly the quality of the print used is superb, with no evidence of wear and tear whatsoever. On the whole blacks and skin tones are represented well and colours are rich and vivid, but perhaps if I'm being picky, a touch too vivid on occasion. Every so often they look slightly oversaturated and garish, and this does lead to slight problems with clarity on edges. Coupled with this there are some issues with edge enhancement. These are far from the worst I've seen however, and are only really visible in certain scenes. Huff comes equipped with Dolby Digital 5.1 audio, and although this certainly isn't the ideal medium to showcase such a track, the disc does surprisingly well within its limitations. Dialogue, which is integral to the enjoyment of this series, is superbly rendered here, crystal clear from the centre, and mixed well within the track. There is a real effort to bring a spacious depth to the listener, with the soundtrack and effects being generously fed to the surrounds on a consistent basis. Bass levels, although certainly not overworked, are still well used in restraint, and the result is a very pleasing rich and deep audio. Considering the confines of the show, this is a job well done. The extras are spread over all four discs, and comprise of one audio commentary per disc, a handful of featurettes, and some brief deleted scenes. All four commentaries are lead by the creator/producer Bob Lowry, and the director Scott Winant, and appear on one episode per disc of the series. Probably the most interesting of these is the opening effort recorded for the pilot episode, where the pair discuss most of the more engaging material about their hopes and intentions on bringing Huff to the screen. The problem here is that, although both contributors are well intentioned and informative, the tracks are very dry, and tend to slip into monotony for all but the most ardent followers of the series. It doesn't help matters that all four commentaries are handled by the same pair. There's no doubt that they are probably the most informed to chair these tracks, however four from the same two contributors does feel a touch repetitive after a spell. Mercifully, they are joined on the final commentary by Hank Azaria and Oliver Platt, and this fresh injection makes this commentary the second most enjoyable of the four. What it gains in initial interest however, it does lose in actual informative information, as the four struggle to really convey much within the crowded confines of the commentary. Spread over the first two discs are three featurettes. Easily the most comprehensive at half an hour in length is disc one's 'Behind the Therapy'. Although set up like a standard PR promo (cast and crew interviews interspersed with behind the scenes footage), this is actually a diverting and informative look at Huff, with some incisive and valuable contributions from those on board. Disc two provides two altogether more insubstantial little snippets, 'Character by Design' which looks at the work of the production designer, and 'Lens of Truth' which focuses on the distinctive stylistic aesthetic of the series. Although neither are particularly in depth, at under 5mins each they don't outstay their welcome and are engaging enough to warrant investigation. Disc two also contains three deleted scenes. These are brief (all three run at under 5mins) and contain nothing especially revelatory in the context of the series, and appear to have fell victim to the editing process. Rounding off the special features is the original promo for the series, and a collection of trailers for unrelated releases. An intelligent, well crafted, and beautifully played series, Huff screams quality. Unfortunately I found it hard to love, and it never became essential viewing. I have no doubt that this will accrue a loyal fanbase, and if that includes you then this fine release is surely a must buy.