"It's pretty impressive how long he's been a loser." 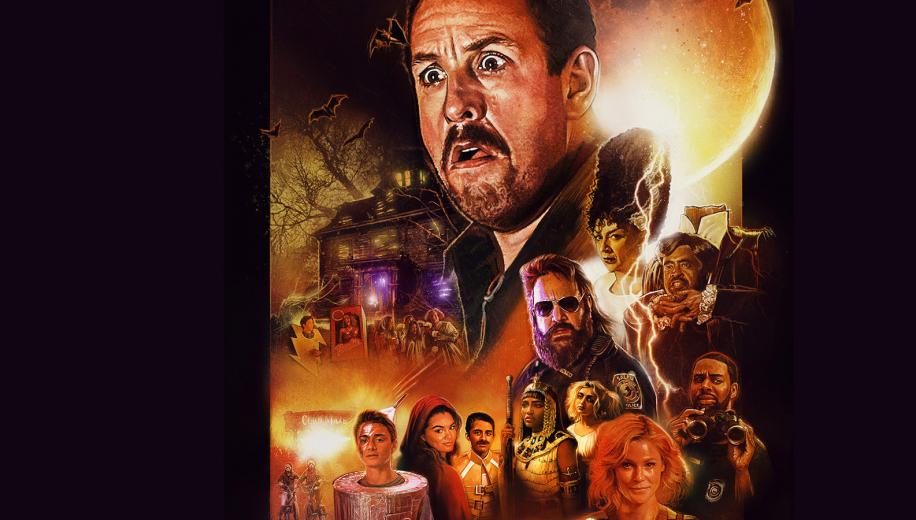 Twenty-eight films into their 4-film distribution deal with Adam Sandler, and Netflix churns out another harmless bit of all-star nonsense, repurposing a spin on Sandler's Waterboy character for this very mildly engaging stupidity.

Credit where credit's due, Hubie Halloween isn't actually an offensive watch, nor does it come across as quite the 'excuse for Sandler and Aniston to have an exotic holiday and drive sports cars' affair that was Murder Mystery (the sequel to which is set to be #31 in the Netflix/Sandler roster), even if it does still feel like a vague excuse to have a staggeringly all-star ensemble cast gather together for a paid Halloween party. Your mileage may vary but your investment will almost entirely depend on your tolerance and/or love for Sandler doing a stupid voice and putting on a stupid face and just assuming that people will find that alone gut-bustlingly funny.

These days Sandler's humour is just lazy, relying on the Michael Bay "well it makes money, so I can do no wrong" approach to these stupid productions

Hubie is the village idiot, mocked and ridiculed at every turn, he takes it upon himself to protect his small town when strange things start to happen one Halloween, and a bunch of people who generally aren't very nice to him mysteriously disappear. Informally deputised by a local policeman just to keep him out of the way, Hubie instigates his own investigation to get to the truth, no matter the cost.

Sandler loves playing the fool, but Hubie Halloween is Next Level in this regard, with probably a clear third of the runtime dedicated to repeated scenes of people pranking his character, often with pathetic jump scares (the haunted house is tedious as all hell). It appears to be his current mantra - find a joke that isn't really funny, but might elicit a reluctant chuckle, and then repeat it TWELVE TIMES.

It's a shame, because he's had his sparks of entertaining silliness across the decades (as well as some really superb dramas, from Punch Drunk Love all the way through to the latest -  the A24, but internationally distributed by Netflix, Uncut Gems), with Happy Gilmore standing out, and even things like Zohan affording some imaginative, dedicated zaniness. These days his humour is just lazy by comparison, relying on the Michael Bay "well it makes money, so I can do no wrong" approach to these stupid productions, which inexplicably top the charts at Netflix (although, if Six Underground is anything to judge by, the bar's not high in terms of viewer demands).

Invited to the party are just about all the regular Sandler miscreants, from Steve Buscemi (every Sandler movie) to Kevin James (it's a shock seeing him in this after the superb Becky, Tim Meadows (Grown Ups), Rob Scheider (every Sandler movie), Adam's wife Jackie (most Sandler movies), Bridesmaids' Maya Rudolph (Grown Ups), and even his Happy Gilmore love interest, Modern Family's Julie Bowen, as well as Shaq (most Sandler movies) and Ben Stiller (most Sandler movies) for a cameo. What Michael Chilkis and Ray Liotta are doing here is anybody's guess, but it's not a good look for either, with Chilkis forced to dangle upside down, whilst Liotta wears a clown's wig and tries to prank Sandler. In fact, the scene where Liotta is/isn't unsuccessfully chatting up a much younger girl at a party is possibly the oddest waste of runtime in the entire movie, and this in a movie where Sandler CG projectile vomits within the opening 30 seconds after referencing Rocky.

Don't expect it to get any better as you proceed; just be thankful it doesn't get any worse, and, also be thankful it isn't Murder Mystery, but when Sandler can't even get a "Waterboy-Style" project to work, he's really got no hope, as that's already aiming pretty low. It would actually be great if he could just stick to dramatic work, but unfortunately that's not where the money is, and I suppose we have to accept that the only way he can make films like Uncut Gems is by doing this. Ah, did that sound convincing? No, this kabillionaire could probably make good movies for the rest of his life 'for free' - he's just too lazy. So expect a Hubie Halloween sequel every year until Sandler actually grows up, and until Netflix starts to use statistics other than the number of people who watch the first three minutes of a movie to judge their merits.