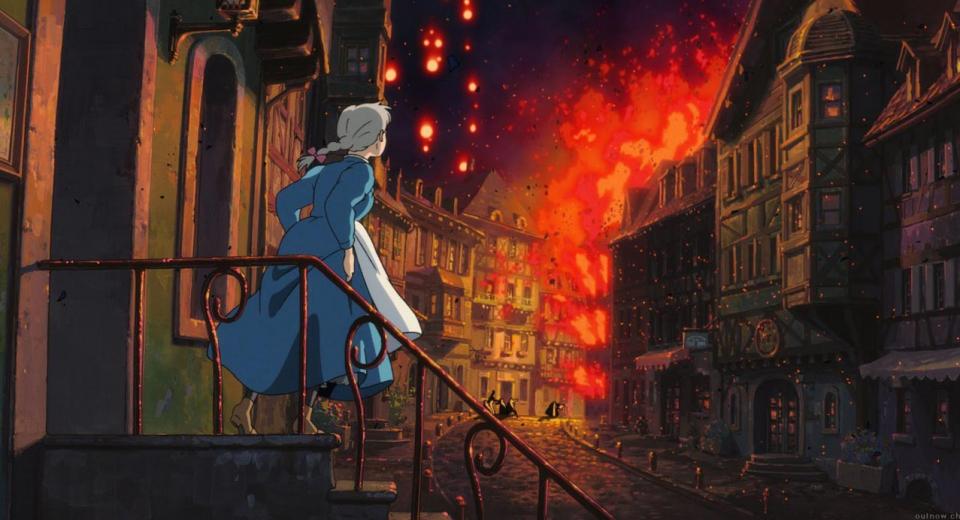 Hayao Miyazaki is an undeniably brave visionary where japanese anime is concerned. Lauded as one of the greats of our time, he has earned one of the highest acclaims possible by winning the Academy Award for Best Animated Movie for Spirited Away back in 2003. It was the first ever Japanese animated movie to claim such honours, and in many ways opened the floodgates for a much wider western audience for this particular style of anime. It's fair to say that the widespread approval with which Spirited Away was met, tapped a vein that perhaps led some to a much broader appreciation of Japanese anime. Spirited Away remains a treasure that cannot be contained within the confines of just anime; it transcends genre.

Howl's Moving Castle follows suit somewhat in that it attempts to spread it's wings beyond imagination, and in many ways it is successful, but what is fundamentally clear is that, for Miyazaki, emotion prevails over story. This is something that Studio Ghibli has never shied away from, and Howl's Moving Castle is no different. Recognised with a nomination for Best Animated Film in 2006, which, whilst undoubtedly testament to the originality and quality Miyazaki's stylistic approach to cel animated movies, it's arguable that the nomination may have been the result of an infatuation with Miyazaki's growing kudos after the success of Spirited Away.

I'm all for pushing the boundaries and using cinema to stoke the fires of imagination in unconventional ways, but the long and short of it here is that Miyazaki has forsaken both plot and narrative in order to preserve his own personal artistic license. Not that this equates to any kind of massive failure; if you're going to let anyone loose at the creative controls you could do a lot worse. The thing is, I can live without one or the other, but I'm not sure I can really live without both. It is, without question, an effort to relinquish your grasp on the tale as it unfolds, however, it is equally necessary to do so. The main drawback with Howl's Moving Castle being that Miyazaki treats narrative in a fractal way, similar to the behaviour of a dream, and though this lends a unique originality to the film, it also leaves Howl's Moving Castle somewhat overshadowed by Miyazaki's Monalisa; Spirited Away.

Scepticisms and narrative confusion aside for a moment, it's worth pointing out that we don't get many offerings of cell animation for adults these days, and in this adaptation of British author Diana Wynne Jones' book, Miyazaki's -creativity over coherency- approach, acts as a catalyst for a myriad of emotions to wash over us for the full 119 minutes of cell animated wonder. It's distinctive look and feel are set in a format easily recognisable to those of my generation, and hark back to such classics as the french animated Mysterious City of Gold, or at a stretch, perhaps even seminal sci-fi cartoon series Ulysses 31. Whatever it can be likened to, when I see this movie, I'm filled with a giddy sense of childhood nostalgia.

Reminiscent in style to the celebrated Spirited Away and Princess Mononoke, though less traditionally anime, Miyazaki has once again provided us with a glorious and unmissable gem, whether a fan of the genre or not. What's more, the Blu-ray release offers one of the finest ever English Language re-dubs of any anime that I have ever seen; and with a cast bolstered by some of hollywood's heaviest hitters such as Christian Bale, Lauren Bacall & Jean Simmons, it's difficult to ignore. A lot of care and work has gone into this re-dub, and it shows.

Alas, what no amount of Hollywood A-listers will do for any movie so intrinsically personal to the director, is make it easier to understand. Such is true with Howl's Moving Castle. Miyazaki's approach to narrative can be likened to that of Terry Gilliam, another often misunderstood director who draws some big hitting A-listers to his darkly quirky and unique movies. The attraction being the boldness and unwillingness to bend to the Hollywood machine that he exudes with his very personal approach to movie making. Howl's Moving Castle, with it's unique take on creative design echoes this approach and feel superbly, though it's general refusal to be helpful when it comes to it's audience being able to follow what's going on, preferring to let us wonder if we enjoyed it because we understood it, or because we felt a little lost at times, does get a little tiring after a while. Of course, the added marketing weight that having such Hollywood superstars attached to the production is undeniable, however, it never once feels tacky or over the top. This was a case of choosing the right people to work with, and for my buck, it worked.

The story begins with a young girl, Sophie (Emily Mortimer), choosing to stay and work late rather than join her colleagues to go out. There is an unspoken sadness apparent almost immediately, she is withdrawn and solitary, wary of the toils of men, arduously working night and day in her late father's hat shop. The other girls blush and flutter their eyelids whenever the mysterious wizard, Howl (Christian Bale) shows up, but Sophie remains meek and unassuming, focussed in her tasks. She has no interest in the wonders of magic, trickery or boys.

The time and place is undefined, but seems to be that of 19th century europe. There is a looming sense of a nation at war with ticker tape parades, gunships passing in formation flight overhead, and guardsmen at every corner. There is a bustling air of militaristic tension. Whilst returning home, Sophie is accosted by a pair of bayonet bearing soldiers. Uncomfortable and unaccustomed to men being forward and lewd, she begins to panic. It's here we are introduced to the main protagonist, an intriguing and overtly flamboyant character, the infamous wizard, Howl. Toying with the military men and making a fool of them, he effortlessly whisks Sophie off her feet and ushers her along the cobbled streets. Howl suddenly realises that he may have involved the girl in his own troubles when they are spotted by some dark and shadowy figures who begin to pursue them. Howl takes flight to escape and carries Sophie to safety.

Spellbound by her incredible experience, Sophie returns to the hat shop, but a mysterious visitor comes calling. The evil Witch of the Waste (Lauren Bacall), who's shadowy servants had informed her of Sophie's exploit's with the wizard Howl that day, casts a spell on Sophie, turning the pretty young girl into a haggard old woman. Sophie discovers that she is unable to speak of this spell, and any attempt she makes to try to convey what has happened to her, turns into unintelligible gibberish. Unable to face her situation, and at a loss for what to do, Grandma Sophie (Jean Simmons) flees the town and makes her way into the wastes. With the help of a friendly Scare Crow she affectionately names Turnip Head, finds refuge in Howl's castle.

Inside the castle, Grandma Sophie is befriended by a cheeky fire demon, Calcifer (Billy Crystal), who runs the castle, and Markl (John Hutcherson), a young boy who helps look after Howl's duties delivering medicine and magic to the townsfolk through a magical door in the castle that can open into 4 different parts of the kingdom. Upon Howl's return, Grandma Sophie poses as the new cleaning lady, hired by Calcifer. The tale begins to descend into a kaleidoscopic riddle of magic, wonder and confused intrigue. We follow Howl around whilst he disappears on mysterious and dangerous quests, whilst Grandma Sophie explores the castle and it's magical properties. What seems to be missing is a strong representation in the narrative of Sophie's desire to return to her youthful self. We catch glimpses of her anger at the Witch of the Waste for casting such a hideous spell on her, but this generally tends to be abated by Sophie tending to the castle's aesthetics, cleaning or sweeping or some such other household duties.

Slowly, Grandma Sophie becomes more and more at home with tending to Howl's castle, but when Howl is summoned to the King to lend his sorcery in aid of the Kingdom's war effort, things take a turn for the more dramatic, and Grandma Sophie is pushed to heroic lengths in her bid to save Howl from his dark and tumultuous fate, orchestrated by the King's Sorceress, Madame Suliman (Blythe Danner), whilst simultaneously finding her own motivations in regaining her youth and discovering Howl's origins.

It's this second half of the movie where the narrative becomes increasingly difficult to follow, but it's something that Miyazaki does not apologise for. His intention here is to allow the movie to ebb and flow in a dream-like and fractured way, rather than make the narrative readily available in bite-size chunks, or to adhere to any strict coherency. This is something the movie both suffers for, and benefit's greatly from. The ability to allow yourself to be captivated without needing to know what's going on exactly is something that will be of huge benefit to audiences here. Those that find it more difficult to stay invested because of the non linearity may find that one of the major saving graces over the meandering narrative is the quality of the cel animation. It's use in general is waining, so it's thoroughly refreshing to see such a masterful demonstration of it here.

Performances throughout the movie are impeccable in both Japanese, and the English Language re-dub. Billy Crystal lends a dry new york humorous twist to Calcifer; Bale brings a brooding mystery to Howl with his whispery tones; Lauren Bacall is captivating as the Witch of the Waste, and Jean Simmons delivers an exemplary performance as Grandma Sophie. This all star cast, coupled with the magic of Miyazaki at the helm, means we are treated to an astounding feat of cinematic wonder, marred only by a slightly confusing and disjointed narrative. If you can forgive that, this movie is as rewarding to watch the third time round as it ever was the first time.