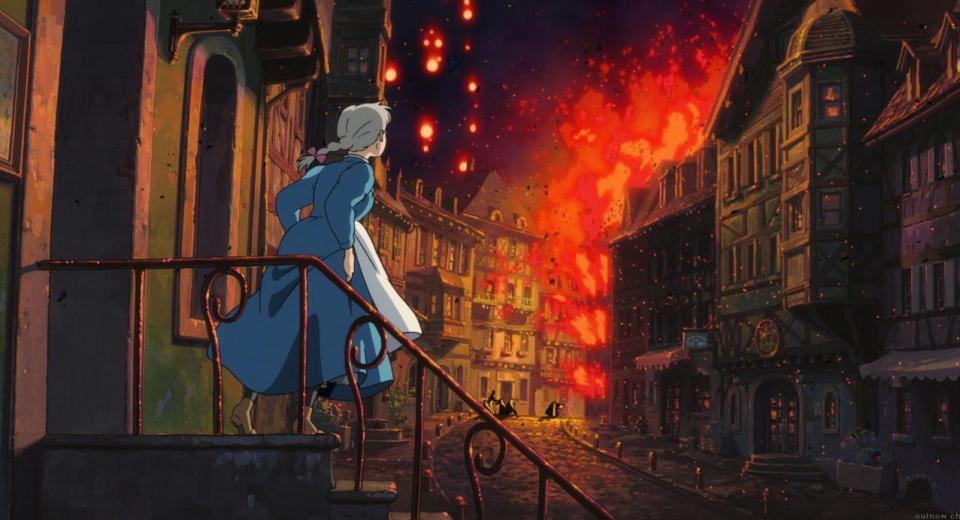 It's difficult to give an overly critical take on the the 1080p 16:9 image quality since it's cell animation, but the quality of the animation is, indeed, masterful. Sharp and clean, the lines are crisp and make the carefully selected colour palette pop off the screen. The shooting stars are a wonderful example of the excellent use of both animation and colour. Overall the grading is a mix of yellows and reds, but it's not heavy handed. Frame jumping or snagging is prevalent, but that's to be expected with cell animation. The blacks stand up well considering, and the blending between CG and hand drawn artwork is seamless. It's too stylistic to be too harsh on it, but if you're looking for a “hi-def” experience, there are better examples out there, but this, for the purist, stands firmly on it's own two feet as a beautiful spectacle. The default option on the Region B Blu-ray is a beautifully mastered DTS-MA Audio track. Delivering a clarity that is generally unexpected from the genre. Dialogue is crisp and clean and sound effects are superb, from the deep and rich atmospheres and background ambiences, to the bright and rounded foley and sound design. Surround is utilised well, and creates an incredibly immersive atmosphere with some truly wonderful sound design. There's nothing groundbreaking here, but it will definitely give your rear speakers a good work out. LFE is used sparingly, and doesn't tend to boom. The soundtrack is nothing new for the genre, and for the most part goes largely unnoticed without feeling out of place or jarring, but a beautiful stand-out signature piece by Youmi Kimura sets the tone perfectly from the outset. As is always the case with English Re-Dubs from Japanese, occasionally, the sentences don't quite match up with the lip-sync animation, but this is totally forgivable, and absolutely does not impact negatively on the movie. For the purists, Japanese with English subtitles is available, so really nothing to complain about. Loaded with extras, this Blu-ray certainly gives value for money. Along with that, it offers some incredibly detailed insights into the tools and techniques used to achieve such great results with the animation.

Alternative Angle Storyboards – The clue is in the descriptive title, storyboards detailing the various unseen angles from sections of the film

Interview with author Diana Wynn Jones – A great interview shot back in 2004 around the time of the film's theatrical release, we're invited into what appears to be Mrs Wynn Jones' home in Bristol where she reveals herself to be a wonderfully affable lady, and a big fan of Miyazaki's interpretation of her cherished novel.

Interview with Pixar's Pete Doctor – Writer and Director of Pixar's Up and Monsters Inc. reveals details about his involvement in the movie

Hello Mr. Lasseter Featurette: Hayao Miyazaki visits pixar – An intriguing insight into a surprise visit by the director to Pixar Studios where we hear John Lasseter applaud Miyazaki as a creative visionary and a personal inspiration

Explanation of CG Featurette – One for the more hardcore, it demonstrates some of the tools used to marry CG and 2d Cell Shaded animation together. Technical, but insightful

Behind the Microphone Featurette – A look at the Voice acting sessions, another intriguing behind the scenes insight Howl's Moving Castle is as wayward a tale as it is unique, and one that I have a giant heart shaped soft spot for. It ticks all the right boxes for any anime enthusiast, or newcomers to the genre for that matter, and I have no doubt whatsoever that it can confidently stake it's claim to a place in the hall of fame of Studio Ghibli's repertoire. However, for those seeking a structured and linear narrative, more akin to the conventional animated movie offerings from the likes of Pixar and Disney, this may prove challenging. Though I would urge anyone who hasn't yet experienced a Studio Ghibli movie to start, perhaps, with Spirited Away or My Neighbour Totoro purely for their accessibility, it is impossible to deny the fantastical dazzling spectacle of Howl's Moving Castle, and for this reason I would thoroughly condone jumping straight in feet first for this classic and timeless movie. Expect to be as confused as you are amazed, but there's plenty here for the curious newbie to digest, and plenty for the steadfast anime fan.

The overall quality of this Blu-ray release is great, with stunning visuals, a wonderfully immersive soundscape, excellent voice acting, and a plethora of featurette based extras. It's a "must have" for any anime enthusiast, and would easily hold it's own in any Blu-ray collection. A fine example of format doing the source material justice.