How to Train Your Dragon: The Hidden World 4K Blu-ray Review

How to Make Your Non-Pixar Animated Franchise 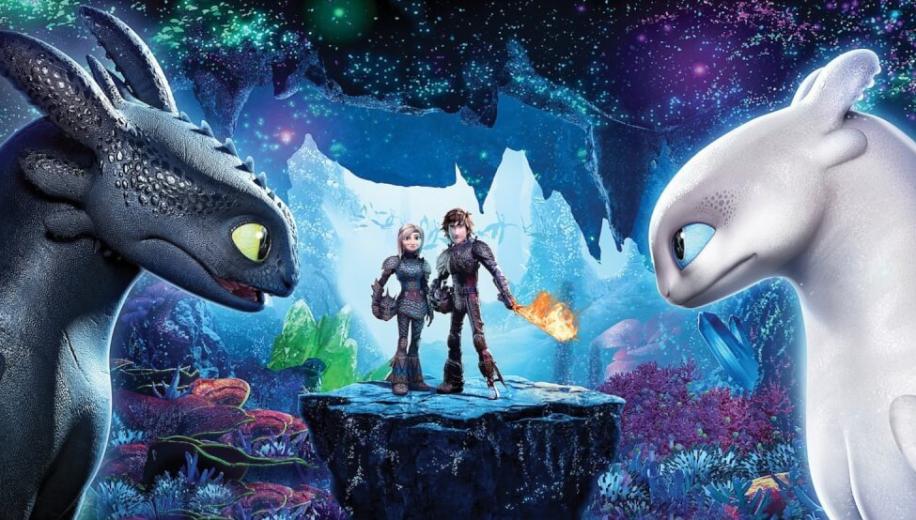 How to Train Your Dragon: The Hidden World Film Review

The Hidden World provides a fitting and heartfelt end to arguably the most effective non-Pixar animated franchise.

Over the past decade, the How to Train Your Dragon franchise has gone from strength to strength, succeeding is developing not only a worthy movie series, but also a number of TV series spin offs, delivering a not insignificant eight seasons, six of which were commissioned by Netflix.

The franchise has followed Jay Baruchel's Viking, Hiccup, from fledgeling trainee - disobeying his Viking Chief father (Gerard Butler) and brokering an unlikely union between the Vikings and their most feared enemies, dragons, largely through Hiccup's rescuing of broken-tailed super-powerful Night Fury dragon, Toothless - to proving that the Vikings and dragons could work together. Hiccup found love in America Ferrara's tough fellow Viking, Astrid, lost his father, and found his long-lost mother (Cate Blanchett), also finding himself promoted to Viking Chief of the bustling town of Berk, home now not only to the Vikings but also the diverse dragons that they ride.

After successfully mounting his latest rescue mission against a group of dragon-hunters who had dozens of the beasts in captivity, Hiccup's dragon Toothless gains the attention of F. Murray Abraham's Grimmel, a scheming dragon-hunter who is surprised to learn of the continued existence of another Night Fury, having personally set about wiping out the dragon species. When Grimmel sets a trap - using a female Fury he has in captivity to gain Toothless' attention - a series of events is set in motion that leads to Hiccup having to make some tough decisions about the future of not only his relationship with his beloved dragon, but also of the entire town of Berk.


Although it does not tread the line between adult interest and child enjoyment quite as well as Pixar, it provides a more stable marriage of the two than any other non-Pixar franchise

Franchise helmer, writer/director Dean DeBlois returns to provide this conclusion, assisted in the background by DreamWorks co-founder Spielberg himself, with franchise composer John Powell also once again in the fold, and all of the key cast members intact. They deliver a suitably visually stunning effort, with some utterly spectacular sequences, and plenty of child-friendly threat injected into the action-packed narrative; although it does not tread the line between adult interest and child enjoyment quite as well as Pixar, it provides a more stable marriage of the two than any other non-Pixar franchise (c.f. Illumination's Despicable Me films).

The Hidden World may not travel far beyond the realms of relatively safe children's animation formula, but it does enjoy exploring those realms nonetheless, trading in a certain Thor-like formula to its structure not just as a film, but as a franchise, with a Viking-like rebel forced to prove his worth in order to take his rightful place as the leader of his people, finding love, losing one parent, whilst going searching for another one, and ultimately faced with having to uproot and relocate his entire Kingdom when a new threat arrives to destroy it. The Dragon series has done its best in staying true to its core coming-of-age focus on the main character of Hiccup, and The Hidden World may not exactly push the boundaries, but it does follow through with a fitting finale for this long-running character (although if they really wanted to do a Toy Story 4, they'd likely find a way, and there's plenty of room for prequel Netflix series like before).

How to Train Your Dragon: The Hidden World comes to UK Ultra HD Blu-ray courtesy of Universal, matching up to their US release from last month, and delivering the same largely excellent 4K presentation.


It's utter demo and reference excellence

The Hidden World is an already reference title in its mere 1080p Blu-ray guise, and yet somehow this 4K version comfortably bests it, relying almost entirely on the powers of WCG and HDR to pull greater depth of colour, and thus previously unseen detail, out of a seemingly limited 2K DI, whilst bathing your eyes in the visually opulent realm of vibrant neons, cast against a rich and bottomless backdrop of inky blacks, and rendered with such intensity that it gives the feature an almost 3D pop.

From the fiery opening intro, to the colourful sky-full of dragons riding home in triumph, to the hell-like pits of the villain's lair and the aforementioned neon utopia of the hidden world, the film has a bevy of stunning setpieces, really pushing the limits of what digital animation can show, in terms of its gorgeous skies (we've come a long way from sky blue with wispy clouds, to the purple-tinged sunsets afforded here) and its searingly intense flames. It's utter demo and reference excellence, besting even the Lego Movie 2's impressive presentation.

On the aural front, the stunning accompanying Dolby Atmos track perfectly marries up to the tremendous visuals, delivering a rousing High Definition 3D immersive audio track which sweeps you up during every thrilling setpiece, and enhances the emotional weight every key scene.

There's firm prioritisation of the dialogue across the front and centre channels, keenly disseminated with clarity, no matter how hectic the proceedings (which, given the fact that just about everybody in Berk appears to have their own dragon, can be pretty damn hectic). The score fits the mood perfectly, with John Powell bringing back familiar themes from his previous two scores, but instilling this with a fresh new vibe too, providing a backbone to the aural component, with the effects laid upon it.

Clearly the key component, it's the effects which push the positional prowess of the immersive Dolby Atmos track, shooting blasts into your wall, as dragons sweep across your living room, and raging fires threaten to engulf you. Directionality is impressive, but immersion is tremendous, and with a booming undercurrent of LFE (not Spider-Man: Into the Spider-Verse, but noteworthy nonetheless) this stands out as a great demo track.

How to Train Your Dragon: The Hidden World enjoys that still relatively rare status of being a release that the Studio has actually bothered giving some attention to, porting all of the extras from the Blu-ray disc onto the 4K Ultra HD disc itself. It's a largely great selection of extra features too.

Headlined by an Audio Commentary from the writer/director, the producer, and the head of character animation, there are also a couple of nice animated Shorts to accompany the main feature (good, but nowhere near the emotional heft of Pixar's Shorts), and a selection of Deleted Scenes, as well as an Alternate Opening, all of which amount to largely unfinished footage (although there are a couple of in-character 'faux' extra scenes, relating to sheep, which are finished).

The remaining extras are basically Featurette-based, with almost a dozen of them, mostly just a couple of minutes long, which offer a look at expanding the franchise, a 60 second recap of the previous films, some time with the voice actors in the studio, and comments from them over their experiences in the franchise, looking at the character paths, the dragon designs, the villain, and the new Berk home.

How to Train Your Dragon: The Hidden World 4K Blu-ray Verdict

How to Train Your Dragon: The Hidden World 4K Blu-ray Review

Staying true to its coming-of-age focus on Hiccup, The Hidden World follows through with a fitting finale

How to Train Your Dragon remains a very consistently entertaining franchise, possibly standing out above any other non-Pixar animated franchise in that respect. It delivered a strong opening movie, a superior sequel and now a fitting conclusion to the trilogy, and Universal's 4K Ultra HD Blu-ray disc affords the feature stunning video and excellent Atmos-enhanced audio, as well as a great selection of extra features which have - for once - actually been ported over onto the 4K disc itself. It comes recommended.