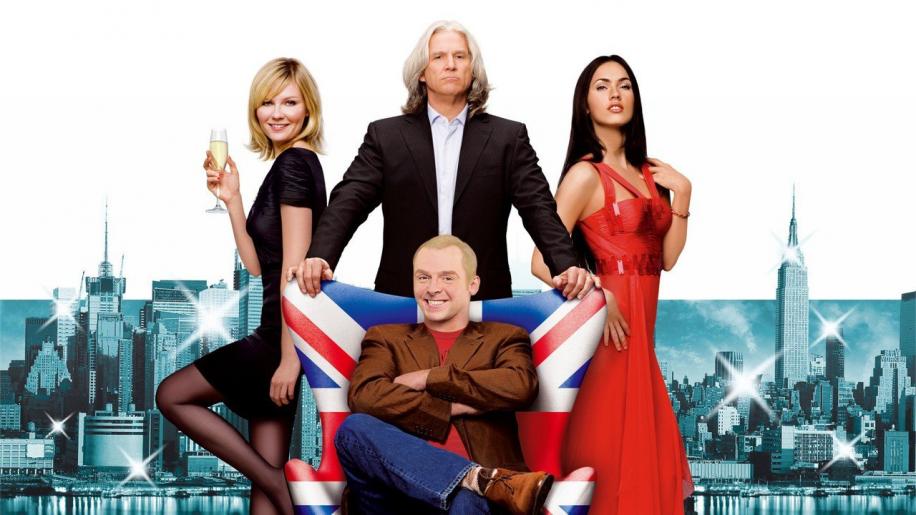 The premise behind 'How to Lose Friends and Alienate People' really appealed to me. The very thought that someone with the innate ability to irritate others would attempt to take on the pretentious glossy magazine world of New York, just seemed loaded with opportunities for laughs and 'payback' that I couldn't resist it.
Based upon the book of the same name by journalist Toby Young, it provides an excellent vehicle for flavour of the month, Simon Pegg, basking in the success of 'Shaun of the Dead' and 'Hot Fuzz'. The movie has a superb cast, including the gorgeous Kirsten Dunst, Gillian Anderson (of 'X-Files' fame), Danny Huston (son of John Huston), Megan Fox and last but by no means least, the Dude himself - Jeff Bridges.
The story is really about Toby Young's misadventures in magazine publishing and the film makers experienced his genius for aggravation first hand during the shoot as he distracted crew members and annoyed the director, Robert Weide (“A little bit of Toby goes a long way”), to the extent that they eventually banned him from the set.

The movie begins with Pegg as Sidney Young (names changed to protect the guilty) infiltrating the red carpet launch of a movie by attempting to pass himself off as a minder for 'Babe', a charming piglet, about to star in 'Babe 3'. He's there to cover the event for his own subversive magazine, the PostModern Review.
This fails, so his fallback plan is to gatecrash the after show party, thinly disguised as a waiter, and schmooze with the stars. Unfortunately the pig, who has been left in a hotel room, escapes and disrupts the party in spectacular fashion by relieving itself on the Manolo Blahniks (that's shoes to the non-fashionistas) of a guest.

The following morning, the press publish pictures of Young (Pegg) gripped in a headlock by Clint Eastwood, which quite naturally he cuts out and has laminated.
His escapades amuse ultra-chic Sharp's magazine editor, Clayton Harding (who is loosely based on Graydon Carter, the editor of 'Vanity Fair' - and played by Jeff Bridges), who hires him to join his staff in New York.

No sooner has Young arrived in New York, than he offends his future co-worker Alison Olsen (Kirsten Dunst) to the extent that she sets him up on a date with a trans - sexual. As Sidney parties the night away with his new found 'girlfriend' he's unaware of his booboo until confronted by his landlady, Mrs Kowalski (the wonderful Miriam Margolies), complaining about the noise when all is revealed - so to speak.


On his first day at the office, Young presents his Editor with a totally tasteless T-shirt, which Harding casually disposes of via an open window before explaining the 'Seven Rooms' hierarchy that exists within the magazine.

On his first magazine assignment, Sidney, checking captions for a photo page, calls a powerful Gallery owner. "Is he the fat one?" Sidney asks the astounded woman about one of her clients. Silence. "Well, is he the one with the wonky eye, then?"
His ineptitude is wonderful, but he's unaware of it, so wrapped up is he in his own little world.

Young moves from one minor disaster to another, including coughing a mouthful of burger on to the back of a white coat worn by a relative of the Editor. Pegg's acting here as he chokes on the burger is hilarious.

The best has to be where he accidentally kills the Chihuahua belonging to rising starlet Sophie Maes (Megan Fox) and removes it from the building in a 'borrowed' handbag. I don't know why I find the demise of spoilt, yappy little dogs funny, I just do. He tries to make amends and cheer her up by sending her a bowl of goldfish (“Like she really needs more flowers.”), which unfortunately are dead on arrival.
Young's prank of arranging a strip-o-gram for his immediate boss Lawrence Maddox, played by Danny Huston, backfires when the Editor's wife and two small daughters decide to pay him a visit just at the wrong moment.

After embarrassing himself at a garden party, like a true gentleman, Young takes a drunken Alison Olsen (Dunst) back to his place, only to be met by his father (the great Bill Paterson) on a flying visit. Young's discomfort is further compounded when Alison produces a small packet of white powder from his jacket pocket.


Young's journalistic integrity precludes him from writing articles on stars represented by publicist Eleanor Johnson (Gillian Anderson), who wants full copy approval.
In order to 'join the party' he eventually has to give in to the queen of PR and from then on his career blossoms.

A 'will they, won't they' love affair with Alison builds during the second half of the picture as her 'on-off' affair with the married Maddox eventually fizzles out.

Now, anyone who's thinking that this is just a succession of pratfalls is labouring under a mis-apprehension, as Simon Pegg brings a great deal more personal charm to the character of Sidney Young than the real life person he's based upon could ever have achieved. He makes it all very plausible and it's more down to bad luck and timing that things go wrong for him, so we have a certain amount of sympathy for the hapless hero.

Kirsten Dunst plays the love interest, Alison - who has her heart broken by Maddox -
with a great deal of fragility and you really hope for a happy ending.

This independently produced comedy is a cut above the 'run of the mill' rom-coms that Hollywood regularly churns out. This is due, in no small way, to the freshness brought to the piece by director Robert Weide ('Curb Your Enthusiasm') who has, as yet, to be tainted by the big budget, big star treatment of Tinseltown. It's also due to the quirky nature of the script by Peter Straughan and the performance of a great ensemble cast.

This movie actually caused me to laugh out loud several times, while the rest of the time I watched with mirthful anticipation to see what would go wrong for Sidney Young next. There's a touch of gallows humour about it.
For those of us for whom Lady Luck often looks the other way, there is something we can identify with in the central character - and we've all experienced the floor opening agony of saying the wrong thing at the wrong time, but maybe not as often as Sidney.

I left this movie feeling that I'd been well entertained and that my intelligence hadn't been insulted by a script written for pre-teens. If you feel that you could really use a good laugh, this movie could well be just what the Doctor ordered.