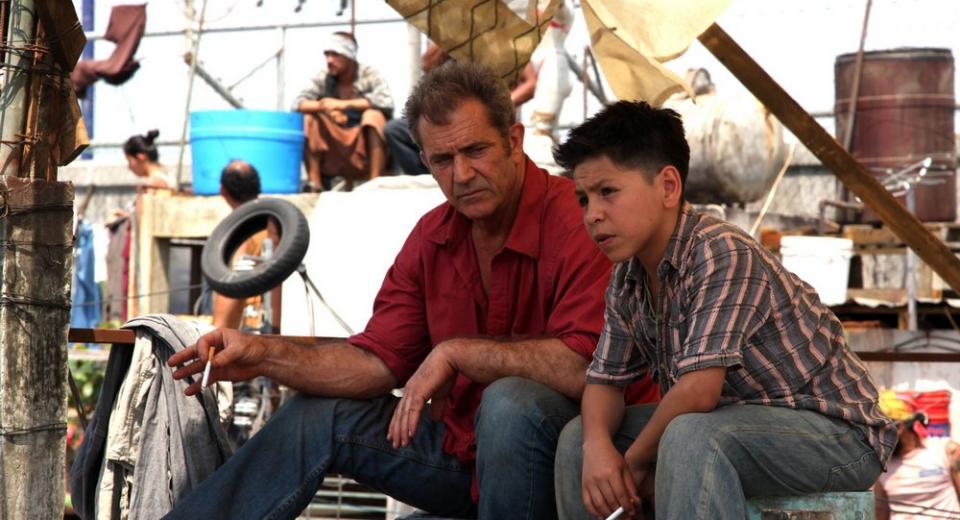 Many people are calling this Payback 2: In Mexico. You know what? They’re right.

Mel Gibson’s had a tumultuous few years. Between leaked conversations highlighting sexism, racism and anti-Semitism, and increasing evidence to support the fact that he’s been a functioning alcoholic for decades, he’s become a pariah in Hollywood, and has lost plenty of fans in the process.

The thing is – he’s a good actor and a good director (evidenced by Braveheart alone) and, in spite of his issues, he’s still capable of doing a professional job: even drinking beer for breakfast whilst filming Lethal Weapon 2 didn’t prevent him putting in a memorable performance.

Looking back at a career of over forty films spanning four decades, my favourite are by and large the ones where he gets really angry and goes on a vendetta (basically everything from Mad Max to Lethal Weapon to The Patriot and Edge of Darkness). However, back in 2007, when asked about returning to action movies, he stated:

“I think I’m too old for that, but you never know. I just like telling stories. Entertainment is valid and I guess I’ll probably do it again before it's over. You know, do something that people won’t get mad with me for.”

Well we’re five years on from that now and I’m here to tell you that he is most certainly not too old for this sh*t.

Right from the outset you know what kind of movie you’re going to get: an elaborate police chase is in progress, the escaping criminals tearing across the desert heading for the border, and wearing clown masks. The shot grinds to a halt as the guy in the back-seat coughs up blood in slow-motion. All the while we get Gibson’s grizzly, gravely tones rumbling out in a voiceover, our (anti-)hero setting the scene, and reminding us that we are (and he is) in very familiar territory.

Gibson’s unnamed criminal – in one of the most spectacular ways you could imagine – lands himself in a Mexican prison. And you’ve never seen a prison quite like this. As he describes, using the same kind of witty, nonchalant narration you would expect from Raymond Chandler’s Phillip Marlowe (continuing the evocative Payback feel), the prison feels more like “the world’s sh*ttiest mall” – you can buy anything you want; it’s got its own particular hierarchy, with bosses selling ‘real estate’ to those with enough money to afford an actual bed; it’s got heroin parlours, sex tents, and prisoners living there with their entire families, kids and all. Predictably, corruption is rife, and the biggest crime bosses within live like kings (remember the scene in Goodfellas where they are all cooking up a feast from inside the joint? It’s like that, only more Mexican).

Anyways, Gibson’s Gringo soon figures out who’s in charge; lying, cheating, stealing and conniving his way up the food chain with escape at the forefront of his mind. Along the way he bumps into a 10 year old kid who has even bigger problems than he does – the crime boss in the prison (“El Heffner”!) has a rare blood type, and is going through livers quicker than he can replace them; the only person left compatible is the kid. With his days numbered, it’s up to the Gringo to come up with a plan to take down the boss, and get them the hell out of there.

“Time to do what I do best. And besides, I’m out of cigarettes.”

This could easily be a follow-up to Payback (Gibson's cut, not the director's remixed version; the differences are highlighted in my review here), all the element are in place: the Gringo’s back-story is established as that of a career criminal (who has also been betrayed by best friends and girlfriends alike); he’s stolen a large amount of money from the wrong people – and now that’s been stolen from him and he wants it back; he narrates throughout the first act, until he has somebody to talk to; and he frequently has to use his wits and cunning to navigate the seedy criminal underworld. Only the setting is different – and all the better for it. The grimy Mexican prison, where the majority of the film takes place, is positively teeming with vibrant life – it’s like the infamous Rio favelas, only even more dangerous – and the claustrophobic atmosphere is palpable throughout, giving the film a colourful, unique and perpetually intriguing backdrop over which the story can play out. It’s not only Payback 2: In Mexico, it’s Payback 2: In a Mexican Prison, unlike any prison you’ve ever seen before.

Of course, none of this was really out of choice: not the location, not the budget, not the no-name cast, and not the ‘unofficial’ Payback 2 status, where there are no direct signs that it’s the same character. Gibson’s been so ostracised from the Hollywood community that he basically had to flee to the Mexican border and fund this production largely out of his own pocket, shooting it in Texas and over the border in an actual Mexican experimental family prison (which had previously been raided and closed largely due to the uncontrollable corruption within – probably not that far removed from what we see on film).

The director is an old friend; one of his long-standing first-assistant cameramen colleagues who worked with him on Edge of Darkness and Apocalypto, and who helped out on the script, which was also largely written by Gibson himself as what appears to be the closest you can get to a Payback sequel without infringing copyright. Considering the limitations and debut director, the film’s shot with a surprising amount of style – don’t concern yourself with the opening scene shaky-cam overload, it soon calms down and instead takes on a Tony Scott-esque over-saturated palette, with almost every sequence shot with a particular colour dominance, slo-mo used sparingly to lend an added edge to what is a strikingly stylish production that seldom betrays its DTV-Seagal-sized independent budget, instead distracting you with well-chosen locations and a cleverly intriguing plot.

The film never saw a wide theatrical release in the States, instead being released under the terrible title of Get the Gringo on video-on-demand (which is basically a free pass for pirates to have their way with this film). Whilst it has seen theatrical releases under a different name in other territories, like the UK, even then it has an almost equally bad title – How I Spent my Summer Vacation, with only the original Spanish title coming close to being halfway decent: Plano del fulga (which, in its translation, would have made for a slightly better title: Escape Plan).

Overshadowed by numerous bigger profile releases, even where it found a theatrical release the cinemas were largely empty. In fact, I probably contributed to a large part of the UK ticket sales personally – five – having gone twice, with three friends in total over the two trips. Which is all a big shame, because this is really quite a fun, unusual crime thriller, marking a distinct return to form for Gibson, who has only just managed – in spite of his uncomfortably bad behaviour – to keep his tough-guy persona going across the years with increasingly sporadic hardboiled crime genre entries. 2010’s Edge of Darkness saw him on similar form, but, other than that, he’s had a pretty fallow decade in terms of these kinds of roles. Yet we still remember him for them, and you know why? Because he really suits them.

You see the key to this kind of character isn’t a Statham-like ability to beat seven shades of the proverbial out of seven armed opponents, but instead a keen Yojimbo-like intelligence that enables him to plan his moves; to play his enemies against each other, using good timing and a whole load of good luck to get the job done. It’s much more interesting watching him sneak around the prison – using distractions and subterfuge to cheat and rob his way up the hierarchy – than it would be to see him just shoot his way around; although there’s a fair amount of that too, as you might have guessed from the poster. In amidst the grifting and the scams, and in spite of the relatively short hour-and-a-half runtime, they still make time for car chases, hitmen, shootouts with added grenades for extra punch, and a fair amount of torture. At times reminiscent of something Sam Peckinpah would invest his time in – certainly the second act shootout pays tribute to the likes of Bring Me the Head of Alfredo Garcia (my personal favourite) and The Getaway – the action we do get is certainly well-staged and thoroughly engaging. In fact, despite the superbly witty narration of Gibson’s Gringo, there’s a surprisingly dark underbelly to this feature, with plenty of grisly violence to punctuate the narrative.

It’s also of particular credit to Gibson that he has not only written, funded and starred in this show, but that he’s just about the only star in it, pretty-much having to carry the weight of the entire narrative on his shoulders and sustain your interest almost single-handedly. Which he does. Sure, we get support from plenty of little-known Spanish actors (including The Kid, who has a fair amount of great dialogue with Gibson), cameos from the ever-reliable Peter Stormare (The Big Lebowski, Constantine), largely TV actor Peter Gerety (The Wire), and Bob Gunton – who plays almost the same slimy character in every movie he does, from Demolition Man to The Glimmer Man, and most recently seen in The Lincoln Lawyer and 24 – and blink-and-you’ll-miss-them one-liners for the likes of Patrick Bauchau (View to a Kill, 2012, Ray) and Dean Norris (Lethal Weapon 2, T2, Hard to Kill), who were both also in 24, but they’re a dusting of cracked black pepper over what is – meat and bones – a Mel Gibson vehicle, through and through.

Honestly, however hard you find it to put aside your personal views on his drunk and disorderly real-life conduct, How I Spent My Summer Vacation provides a welcome ninety-six-minute distraction that will likely make you forget some of the bad stuff, and which may even remind you of just what Gibson is good at. And with Jason Statham (Safe, The Transporter, The Expendables) looking to take up the reins of the Donald E. Westlake character of Porter (called Parker in the books, and Walker in the excellent Lee Marvin adaptation Point Blank), however unofficial it may be, it’s nice to see the closest thing we will ever have to a Payback sequel, with Porter back, and Mel Gibson back too, doing what he does best.

Give him another chance, and give it a shot, you won’t regret it. Recommended.

However hard you find it to put aside your personal views about Gibson, his latest film provides a welcome distraction that may help you forget the controversies, and remind you of what he’s good at. With proper studio backing, a bigger budget, and the relevant copyrights, this could have easily been an official sequel to Payback, but Gibson’s too much of a Hollywood pariah at the moment to get any of those. Instead he’s written, funded and starred in what is essentially an unofficial sequel. Making the most of its unusual location, and with Peckinpah-edged stylisation from the director, it has Gibson back at his hardboiled best, conning, charming, wise-cracking and shooting his way through a colourful Mexican prison with all the punch and panache he’s always brought to these wittily-scripted action-crime-thriller roles. Recommended.