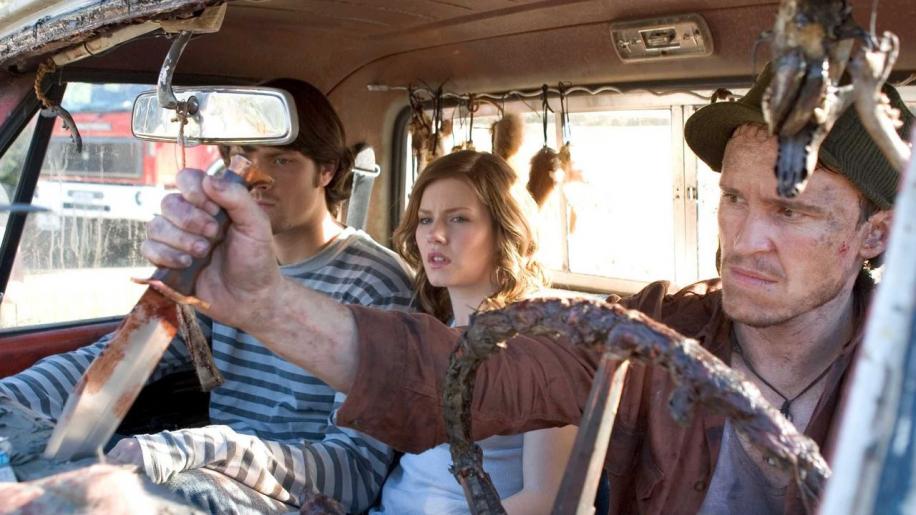 While Michael Bay's production company is busy churning out horror remakes like The Texas Chainsaw Massacre and The Amityville Horror, Joel Silver and Robert Zemekis' own company, Dark Castle Entertainment have been making their own remakes (with some relatively original exceptions). First we had an average House on Haunted Hill remake, then came the lacklustre 13 Ghosts, the disappointing Ghost Ship and finally the mildly intriguing Gothika. Now they have gone back to old material to turn up this remake of the Vincent Price horror, House of Wax.

Six twenty-something friends are on their way to see a big game, taking two cars and making a whole road trip of it. They decide to make a stopover in the middle of nowhere and pitch camp for the night, but soon find that they picked the wrong place to let their guard down. After several silly mistakes (do not break into buildings because you are curious as to what is inside, do not take permission to use somebody's bathroom as a cue to rifle through their bedroom and above all, do not insult hillbillies - to their faces at least) they find themselves trapped in a town where the central attraction is the ominous House of Wax. As their numbers dwindle it becomes apparent that there is something rather strange about the almost ghost town and its inhabitants. There is a killer on the loose, with a more deviant agenda than anybody could have ever expected (well anybody who has not seen the original movie) and it becomes increasingly imperative for the gang to leave the area as soon as possible.

House of Wax is a pretty formula horror movie that does not really stand out from anything else of recent times. Yes, some of the death scenes are pretty gruesome and very imaginative (although almost always ludicrously impossible), yes the young girls do a suitable job of both looking sexy and screaming wildly and yes the bad guys are suitably relentless, but there is nothing really new here. The best thing this horror has going for it is the setting - the quaint little town that is extremely hard to get to (and rather improbably 'not on any map') - with its central House of Wax that hides more than its fair share of secrets. You'll also be surprised to find out that Paris Hilton is not the worst thing about the movie either, although admittedly she is yet to display any signs of acting talent.

I supposed that brings us to the cast. The main reason why Paris' acting inability is not so obvious in this movie is that none of these young hopefuls really has to stretch their talents in this movie - they just have to do the requisite screaming, running and feeble fighting expected in this kind of horror. Called up for duty we have a motley crew of new and familiar faces. There's 24's dreadfully ditzy damsel-in-distress, Kim Bauer (Elisha Cuthbert), who does not really get to broaden her range with this scream-run-hide-fight-scream endeavour, but is nevertheless still quite pleasing on the eye. Then we have One Tree Hill's hero, Chad Michael Murray, here an ex-con rough-around-the-edges troublemaker (who you just know is going to turn out to be an antihero).

The other recognisable face is the aforementioned Paris Hilton. Boy, where do I even begin. The most beautiful woman in the world, Monica Bellucci, came from modelling and has since proved herself in numerous wide-ranging movies. Then there's also the lovely Charlize Theron, who simply took her modelling fame and used it to prove her worth on the big screen. Paris Hilton simply has nothing going for her apart form her (debatable) looks, but sticking her in a horror movie where, again, all she has to do is run and scream and you really cannot tell the difference between her and a better quality actress. Completing the sextet we have Jared Padalecki (standout mainly because he is something like seven feet tall), Jon Abrahams (standout because he wears a stupid hat for most of the movie and videotapes everything, including Paris' sexual behaviour in a couple of scenes that are daringly close to the truth) and Robert Ri'chard (yes, that is an inverted comma in his surname - why? I have no idea and I don't suppose he does either).

They all do their job properly in this strictly by-the-numbers affair which does not have a single jumpy moment in it but does at least offer up some serious gore and nasty deaths. Unfortunately the plot is often cringe-worthy - and sometimes it is just painful to see people being this stupid - but despite this, as horrors go, you largely get what you paid for.