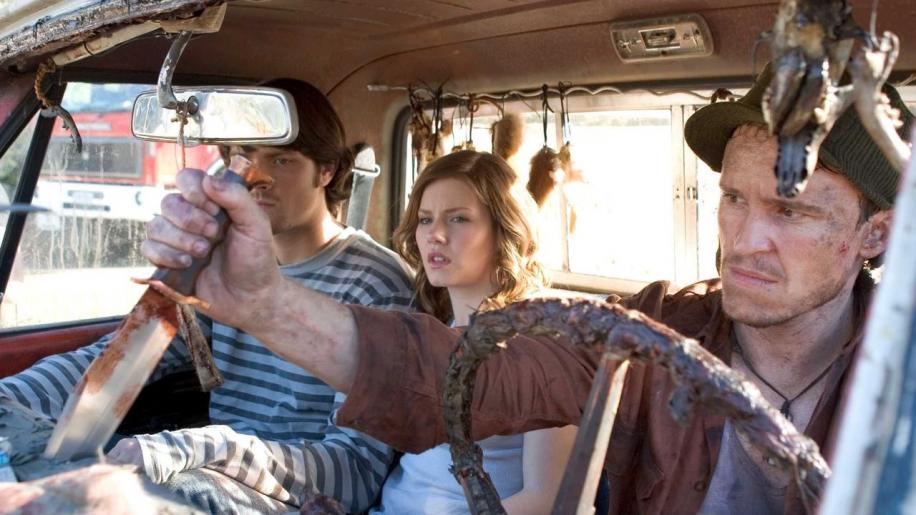 House of Wax is presented with a solid 1.78:1 aspect ratio anamorphically enhanced widescreen transfer that makes the movie shine. Glistening with detail, there is very little softness to be seen, no noticeable edge enhancement and negligible grain. The colour scheme is fairly broad, leaning more to matte browns and yellows (thanks to the waxy predominance) and the blacks are solid - which means great shadowing. The transfer itself shows no signs of any print defects and overall it is a perfectly decent presentation for this new horror remake. House of Wax also comes with a fairly punchy Dolby Digital 5.1 mix. The dialogue is generally presented at the forefront, although we do get some off-centre screams and shouts. More directionality comes from the effects, from the vicious blows to the town's animated lights and sounds. The most noticeable aspect of the track is the music, which is largely comprised of loud, irritating mock-rock but at least it gives the speakers a good exercise. The score is quite atmospheric and jumpy in all of the right places and overall it is also a decent way to present the audio side to this horror. First up we get some B-Roll and Bloopers footage with a cast commentary. Paris, Elisha, Chad Michael Murray and Jared Padalecki all contribute to this twenty-seven minute featurette and we even get to see them sitting on their sofa during the discussions, since the footage is presented in split-screen. They talk about when the production was made, how it was originally intended for release in time for Halloween last year and the fun that they had on set. It is quite an amusing little addition since most of the footage is of their mistakes and they cannot help but laugh at themselves. There are a few nice anecdotes, with Paris talking about how her boyfriend was annoyed at some of the scenes she engaged in, Elisha discussing her problems over her height difference with some of the other cast members and various mucking-about on sets (including plenty of getting stuck in the 'wax' - which was made with Peanut Butter). Although not the length of a full commentary, it is actually probably better because we get to enjoy the behind the scenes footage with a warm, comedic chat over the top.

Wax On is a seven minute look at the production design for the movie. Producer Joel Silver and various other members of the crew pop up to talk about the grand ideas behind the production - building the whole town rather than using a pre-made studio lot. There are shots of the original concept art, the half-built town and the final creations and it is quite an interesting little look at the designs.

House Built on Wax is a ten minute featurette on the Visual FX in the movie, once again with various crew members discussing the effects put into the action. Most of the effects were added to real film footage (rather than completely CGI) and they compare the original House of Wax ideas and how they originally did them with just wax, to modern updated visuals and effects. There are some wax melting tests, pre-effects sequences and comparisons with the final production and it is another interesting featurette.

The Gag Reel is three minutes long and contains some of the clips that you can see in their entirety during the Video Commentary segment. There are plenty of trips, slips, fluffed lines and general goofing around on set and it is worth a quick once-over.

The ninety-second Alternate Opening sequence is an absolutely fantastic little gem. For different movies, the deleted scenes always seem to be the same - we never get more action in an action movie or more hilarity in a comedy, they are cut for a reason and that is often because they are just talky, slow, unnecessary sequences. This is a whole extra death scene, with a character we do not come across in the final movie and - moreover - it is possibly better than any of the admittedly adventurous deaths in the movie itself (despite how implausible it is). Well worth watching.

From Location: Joel Silver Reveals House of Wax is basically a ninety second promo for the upcoming (and soon to be classic) Kiss Kiss, Bang Bang, with Joel Silver sitting in his chair talking very briefly about the production company that he set up to create horror movies and very, very briefly introduce the House of Wax itself.

Finally we get the two-and-a-half minute theatrical trailer that starts off well and sets the scene, but goes on far too long and ends up telling you all of the plot twists and turns (however predictable some of them might be). Worth avoiding until after you see the movie. House of Wax is a perfectly reasonable addition to the ever-burgeoning horror genre. Whilst it is a remake and is not particularly imaginative, it does nevertheless benefit from an unusual setting and some gruesome deaths, which is more than many horror remakes have these days, what with the omnipotence of the PG-13 rating. The DVD presentation is pretty good, with a solid picture and a decent soundtrack, along with some nice extras (the novel commentary option and the deleted scene are particularly good for this release) If you liked this movie, this release is well worth picking up, but if you have not seen it then it is maybe worth a rental first to test the waters.