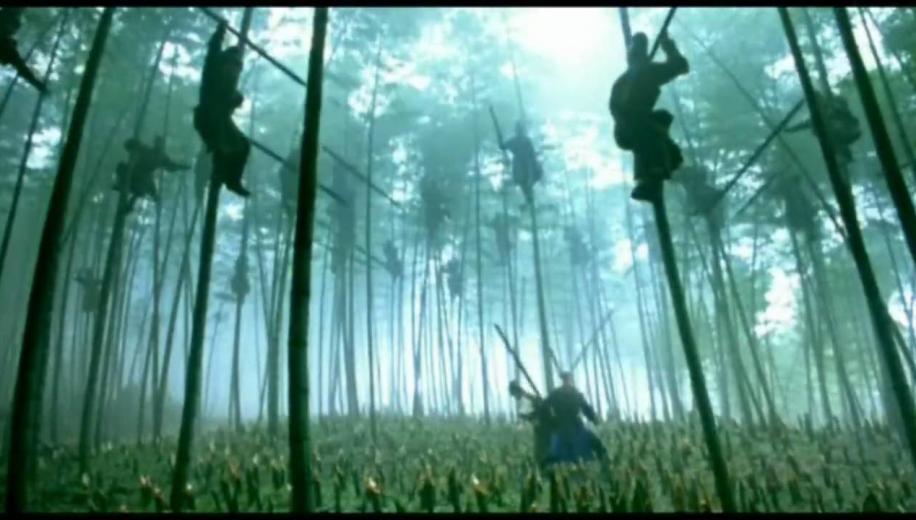 Flying Daggers arrives on a single-layer BD-25, with a 1080p MPEG-2 video transfer in its original 2.35:1 aspect. Now, as many of you will already be aware, the image is problematic and wildly inconsistent, and not at all what you expect to see on a high-def format. But this was a pretty early release, don't forget. However, this is a disappointment no matter what your expectations were.

For a start there can be a fair bit of grain gathered around the image, speckling the compositions quite acutely when it comes to the varied landscapes and the multi-hued skies. This seems to lead to a certain “denseness” in the picture which, although not enough to distract can still irk. Colours can be great, with the burnished gold of autumn leaves, the vivid green of grass and lichen-covered trees and the fabulously patterned costumes often looking bright, strong and bold. But at other times they can appear dirty, indistinct or overly bright. Shots of green-garbed warriors moving though a thick forest, for instance, appear cloudy and lack the appropriate accuracy of shading. However, there are some small things to look out for, such as the colour purple in the stitching on Lau's collar and, again, the purple mosaic print on Kaneshiro's tunic, which do stand out. Blood is nice and deep and flesh tones, thankfully, are good. Another plus is that some of the landscape scenes feature a number of colours occupying the same frame - foliage, people, horses, clothes, weapons etc - and the disc does keep all these elements separate without anything too unsightly like merging or smearing occurring. That said, the Echo Game sequence presents the image with some issues due to the plethora of pinks and pastel shades that decorate the background - the spectators' attire and the ornate setting - in that the whole picture seems to lose a lot of coherence and tends to blend into softness.

Detail is where this transfer is definitely let down. The image just doesn't have any sharpness or evidence of high resolution to it, looking just like a SD transfer for the most part. Contrast is too high, which glitches out portions of the picture and loses it considerable definition. Depth of field just isn't there, with nothing in the way of hi-def three-dimensionality to wax lyrical about. The black levels are just about acceptable, but still do not offer much to add weight, or atmosphere to the image.

But there are some moments in the film that shine. The battle in the meadow provides a good spectacle with its amber texture and lush golden visuals. The swords and shields and costumes can look quite glorious in this sequence and detail seems to suddenly leap up in definition. The final fight is, perhaps, the best showcase of the disc. Once the seasons have mystically (and stylistically) changed and the blizzard sets in, the colour and the detail on offer seem to intensify and sharpen considerably. The blood, the green of Ziyi's robes, the characters' black hair and shining eyes set against the stark white of the snow add up to an image that looks scintillatingly crisp, polished and defined - which is all the more ironic considering that much of the screen is covered with billowing white flakes.

So, ultimately, Daggers is not a great transfer to show off your Blu-ray machine. The image is just not high-definition as we have come to expect it, looking for the most part little better than SD - and sometimes even worse.

The screencaps featured here are from the R2 release and are just for illustration purposes.

Whatever misgivings I may have had about the visual aspect of this transfer, they can be practically overlooked with the simply awesome PCM Uncompressed 5.1 soundtrack in the original Chinese (actually Mandarin, although the disc doesn't state this) that should be your mix of choice on this disc. To put it quite simply, this track is reference quality and will transform your lounge into a bamboo forest, an ornate and exclusive brothel, a lush meadow and a wind and snow-swept field with such finesse, clarity and transparency that you will have no trouble believing that you are in the middle of any of it. Oh, and it will also fill that same lounge with clanging swordplay, bone-dislocating violence and, naturally, lots of those flying daggers whistling about.

To be honest, I have never actually heard a bad version of this soundtrack - with my original R3 and then R2 both supplying tip top DD and DTS 5.1 mixes. But the PCM Uncompressed goes a lot further than either of these, really exploiting the film's complex and beautifully layered sound design. The Echo Game is naturally going to be the first standout segment and, in a word, WOW - the effects and steerage here are magnificent, with the sense of air really being displaced around your ears and the chaotic cacophony presented with ultra-clear precision and accuracy around the full set-up. Any and all combat is rendered with jaw-dropping immersion and directionality. Listen out for the wobble of a blade's tip, the pin-sharp rebound of a dagger off a shield, the meaty bone-into-flesh impacts, and the “thwip” of robes flying about during the action. You can hear swords vibrating after they have clashed, the intricate rustle of leaves and the solidly authentic sound of bamboo spears cutting their way across the soundscape. This is truly great stuff, folks and more than makes up for the deficiencies in the picture.

High ends deliver the razor-sharp sound of swords being whipped out of their scabbards and the excellent effect of Jin flicking his blade to signify his location to the blind Mei. Voices are totally clear and offer a truly natural rise and fall in speech. The score by Shigeru Umbebayashi is excellently reproduced as well, filling out the mid-range with warmth and delicacy and, when called for, some exciting bombast. With searing laments, from Kathleen Battle and Ziyi Zhang, pounding Taiko drums and keening flute-work registering smoothly around the speakers, the film feels sublimely opened up and all-enveloping.

The Chinese DD 5.1 mix is the same one that graced those earlier editions and, it has to be said, it is no slouch. But it truly couldn't compare to the original DTS mix that also appeared on the same disc, so what chance do you think it stands against the superlative PCM track? Exactly. None. There are also DD 5.1 mixes in English, French and Spanish.

I'm very tempted to awarded this release the full 10 out of 10, but I'm going to err on the side of caution as this was such an early release and I expect (hope) future discs to exploit their sound mixes to a similar, or even greater degree. So, although the score is stated as a 9, you can read it as a 9.5!

Flying Daggers comes with a couple of special features which are nice but don't really offer much in terms of BD technology. The first is Creating The Visual Effects, which just takes a few of the key sequences and plays them out in pre-viz, early visualisation and then the full finished shot complete with CG flourish. Nothing we haven't seen before.

The second is just as ho-hum, I'm afraid. Entitled Storyboard Comparisons, this feature merely plays out several action set-pieces with a little box-out in the corner showing us the storyboards that accompany them. Exactly what it says on the tin, folks. Again, this is rather lacklustre and hardly pushes the boundaries of BD capability.

One watch only stuff.

An absolute classic of the genre, House Of Flying Daggers is always the one that I reach for when I fancy some sumptuous oriental eye-candy (with added violence). The story is good and benefits from many layers and a refreshing emotional complexity that plays with character motivations and makes for a few difficult choices on our part. And the action is spectacular, painful and witty.

This BD release may not have much to offer in the visual or extras department, but it stakes its claim for aural showcase of choice with the tremendous PCM Uncompressed track which really is worth the upgrade. An excellent film and an excellent soundtrack.