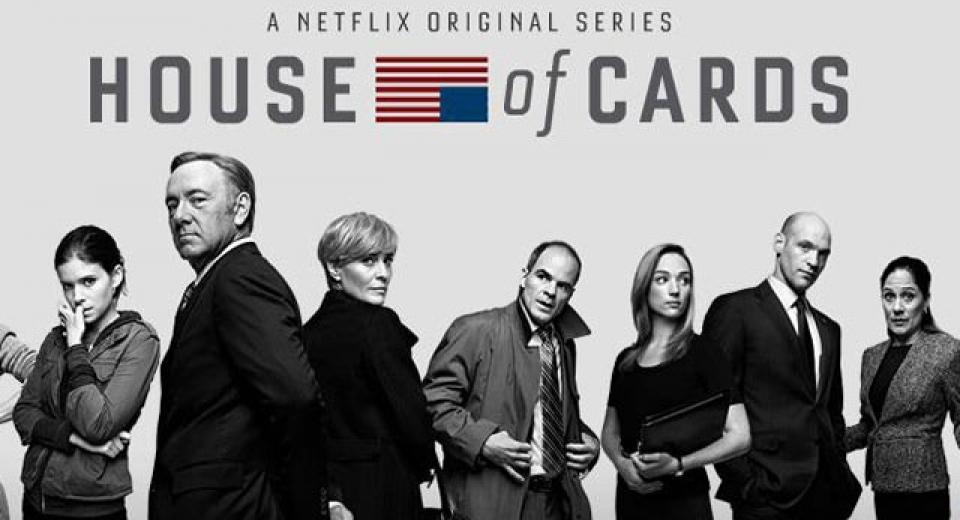 House of Cards hits UK Region Free Blu-ray complete with a near-perfect 1080p High Definition video presentation in the show’s original production ratio of 2.00:1 (yes, you read that right) widescreen. Although it reportedly looked stunning back on its original Netflix debut, I doubt even that high class streaming service could match up to this near-flawless rendition, which boasts fantastic detail throughout. Basically, if you’ve seen any of David Fincher’s latest feature films (like The Girl with the Dragon Tattoo), it looks like that. Sure, he only did the first two episodes, but he clearly set the tone and style for the rest of the piece, and we’re talking glossy, squeaky-clean, almost completely devoid of defects, and highly impressive. Close-ups showcase excellent skin detail and clothing textures, and the detail level is maintained all the way through to the longer establishing shots. The colour scheme is typical of Fincher, as stated, it could easily blend into anything from Dragon Tattoo or Social Network, with lots of dull greys and browns. Often clinical, frequently dour, it is not incapable of vibrant, rich tones, and certainly doesn’t look washed out at all – just very modern, and very serious. Blacks too are strong, without any significant loss of shadow detail. If you’re going in looking for fault, you’re going to find hints of issues scattered thinly across the entire 13-episode season – a smidge of crush, some light banding, a tiny bit of noise and even some likely intentional clean-up done to none other than Kate Mara’s face during the pilot episode. But none of these issues amounts to anything across the 674 minute total duration, and none of them prevent this from being a demo TV title. The aural accompaniment, although it’s a hard achievement, is even better, presenting the series with a stunning DTS-HD Master Audio 5.1 track that thrums throughout the 13-episode run, crafting a heady atmosphere which will get under your skin almost as well as the drama itself does. The ever-important snappy-swift dialogue rattles across at you from the fronts and centre channels, remaining clear and coherent throughout, whilst allowing the surrounds to support with ambient touches: tyres screeching, crowds chanting, bustling parties and clinking glasses – it all helps bring the show to life, and every little effect is given precise and discrete coverage across the soundscape. The greatest contributing factor, though, has got to be the score – from the menu music to the title music; from the brooding score to the music featured within the scenes themselves, the score provides a fantastic, weighty undercurrent which drives the entire piece. Reminiscent of the score to Fincher’s last two movies (both scored by Nine Inch Nail’s Trent Reznor, who was nowhere to be seen for this series, unfortunately), and also several other conspiratorial dramas (like the short-lived but fantastically moody Rubicon), it is easily the best part of the audio offering, and ensures that the entire season is given a bassy backbone, with the LFE channel engaged and involved almost throughout. I don’t think I’ve come across many TV shows which have sounded this good on Blu-ray. Why? A fresh new, reputedly $100 Million series hits Blu-ray with stunning video and audio but absolutely no extras? Well, the reason why is because it’s a Netflix-funded production. Sure, Sony are backing the Blu-ray release, but Netflix are behind it all, and Netflix have no interest in extras whatsoever. It’s a shame because I can’t believe that there aren’t any available and so, therefore, have to assume that Netflix put an embargo on releasing the set with any at all. They must have contractually insisted on the set being bare-bones, lest a wealth of extras somehow put people off streaming the show and made them want to buy it instead (which they would also profit from). Yes, I know, it makes little sense, but this appears to be the case. All the style and punch of a David Fincher production; the Machiavellian uber-plotting of a Dumas epic; and a cast of perfectly-captured characters which is simply to die for, headlined by Kevin Spacey, who is revelling in a much-deserved, latter-end career-high. Indeed, if this is the way forth for acclaimed actors and directors, then consider me sold.

On Region Free UK Blu-ray we get the same stunning video and excellent audio that the stateside package offered, and the same complete lack of extras thanks to Netflix’s embargo on putting extras on hardcopy releases of their productions, lest people use it as a reason to avoid streaming them. You shouldn’t really let that put you off, however, because other than that it is a great package – undoubtedly better video and audio quality than even the HD streaming option on Netflix and certainly the best way to check out this excellent new political drama. Recommended.