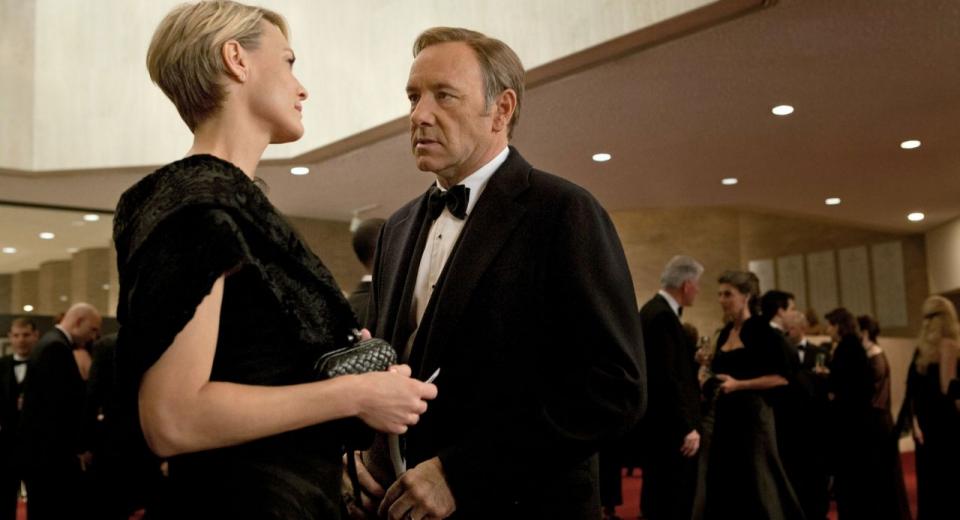 Blending The West Wing with Dumas’ The Count of Monte Cristo, the David Fincher-executive produced $100 Million remake of the acclaimed British political thriller by the same name finds the perfect niche in TV drama for Oscar-Winner Kevin Spacey. Supported by an excellent cast of interesting characters, his Machiavellian politico is the heart and soul of this piece and, with Fincher's direction and drive, the fabulously intriguing show proves, once again, that polished TV is the way forward for plenty of veteran actors and celebrated directors who want to shine and tell a story bigger than is allowed by just a two hour movie.

After Kiefer Sutherland paved the way in 24 (initially directed by Predator 2 / Blown Away helmer Stephen Hopkins), we saw Hugh Laurie make the highest-paid TV actor of all time in the fantastic Bryan ‘X-Men’ Singer-helmed House. From there on out, everybody wanted a piece of the action, but few shows saw this kind of success. Now, over a decade on, the focus is on high-quality HBO-style dramas; shorter seasons which run at around 13 episodes and boast lavish sets and big named cast: Jeremy Irons in the Neil ‘Crying Game’ Jordan’s The Borgias; Dustin Hoffman in Michael ‘Heat/Manhunter’ Mann’s unlucky Luck; and, most obviously, Steve Buscemi in the Martin Scorsese-directed Boardwalk Empire. See the great thing is that these directors only need to do the first few episodes to set the style and tone for the series from then on out. If they get it right, the results can be superb, acclaimed viewing.

Kevin Spacey plays Frank Underwood, the House Whip for the Democrats. Whatever his actual job description, he acts like a Chief of Staff – he knows everyone, and controls everybody, and is fundamental to the working of the political machine. After working his magic to ensure the successful election of the new President, Underwood expects to be appointed Secretary of State. He’s worked hard for it, and it was promised to him by the now-President. But when he gets passed over for the position, Underwood decides that he is going to take down all of those who betrayed him, one by one, and from the inside. With the loyal support of his strong wife Claire (Robin Wright), he sets into motion a complicated plan to clinically undermine the important players above him, enlisting the help of a hungry new reporter, Zoe Barnes (Kate Mara) and coercing the cooperation of a drug addict Congressman, Peter Russo (Corey Stoll), who is struggling to keep his demons from ruining his budding relationship with a co-worker, Christine Gallagher (Kristen Connolly). On the face of it Underwood is working hard on the legislation necessary to cement the President’s position but, behind the scenes, he is systematically tearing apart the party and putting it back together with pieces and players that he has chosen.

The story follows the same basic narrative as its British counterpart, and adopts not only the same style of delivery (the lead character often breaks the fourth wall to speak directly to the viewer, a tactic which takes a bit of getting used to) but also even some of the same lines. Normally I’m not a great fan of remakes, but in TV it can sometimes work. Gone are the days where excellent shows like the Robbie Coltrane crime drama Cracker gets shamefully ripped off for US audiences; nowadays TV series remakes almost always add something significant and new into the mix. This even includes The Office (US), which started off by just regurgitating the unbeatable Ricky Gervais / Steven Merchant script for its first few episodes before taking the characters and the set-up and running with it in new, interesting and entertaining directions. The US version of The Killing similarly worked surprisingly well.

I’m sure avid fans of the original British drama will wonder what has happened to the work – it’s been expanded and embellished in a way that those familiar with the taut, streamlined original story would probably find frustrating – but it’s just a different, bigger story. And they should remember one thing: the show is still driven by a compelling lead performance and central anti-hero character.

To this end Kevin Spacey was the perfect choice. Many may wonder why he has ended up in TV, alongside the likes of Sutherland, Laurie, William Petersen, David Caruso, Gary Sinise and Timothy Olyphant – particularly since he’s a two-time Oscar-winner – but Spacey has never had that much room to move in Hollywood. If you think about his roles after the success of American Beauty, things have basically steadily gone downhill, resulting in his 2003 move to UK theatre and 10-year commitment as manager and director of the Old Vic theatre in London. It was just before his final production – aptly playing Richard III no less – that he was approached to take the lead in House of Cards. Commenting that he had realised that some of the most interesting characters and stories were now in television, as opposed to film, he leapt at the chance, also becoming an executive producer to boot.

Indeed David Fincher stated that every single cast member represents their first choices in the roles and I can’t honestly find fault in that statement – they are all perfectly chosen. Fincher had been circling the production ever since the UK rights had been bought up for a US remake, and committed to executive producing the show and directing the first two episodes, echoing the sentiments of Spacey in his belief that you can simply tell bigger, better stories on TV these days, with more interestingly developed characters and better scripts.

Amidst the supporting players, Sean Penn’s ex-wife Robin Wright is excellent as Frank’s steely, loyal wife. You can just about see the cracks around the edges – the emotion creeping in – but her portrayal of a partner, who is the single biggest positive driving force in her husband’s life, is flawless. Kate Mara, as the highly ambitious young political reporter drawn into Frank’s web is also brilliant: cheeky, playful, flirty, and sexual, she may have had some assistance in securing the part (getting her sister – the US’s Girl with the Dragon Tattoo herself, Rooney Mara – to put in a good word with Fincher) but I can’t criticise nepotism when she’s so well picked for the part.

Perhaps the most interesting supporting characters, however, are Corey Stoll’s troubled congressman and his co-worked / love interest Christina, a perpetually wide-eyed Kristen Connolly. Stoll probably gets the most rollercoaster character arc, as he fights to relinquish his drug-addled wild-boy days only to find that Frank wants to employ precisely that dark side in order to fuel his clandestine dirty campaign. Stoll effortlessly juggles self-destructive arrogance with a deep inner desire to be good; to do the right thing, and watching his character evolve – whilst repeatedly testing the devotion of Connolly’s staffer – is one of the big supporting satellite highlights of this series.

There are plenty of other great choices: Michael Connolly as Frank’s unquestionably loyal right-hand-man; Reg E. Cathey as Frank’s friend Freddy, whose BBQ ribs are reputedly Frank’s biggest vice; and Ben Daniels as Frank’s wife’s biggest weakness – hell I could go on to name-drop basically every single supporting case member – but this is still Spacey’s baby through and through.

Of course the biggest comparisons are going to be made to Aaron Sorkin’s The West Wing, which is not a bad thing, but which does set the bar pretty high. Unfortunately House of Cards doesn’t quite have the biting, razor-sharp, fast-talking punch of a Sorkin script – like Fincher’s Social Network, which was also penned by Sorkin – but, what it lacks in script perfection, it makes up for in Spacey’s dedicated, effortless drive. Adopting a smoothly congenial Southern drawl which only helps better disguise his seething venom, Spacey’s Frank is such a strange animal – rather than the kind of overt anti-hero we normally come across these days (the likes of Michael Chiklis’s Vic Mackey in The Shield, James Galdolfini’s Tony Soprano, or Kelsey Grammar’s volatile Boss, who make it clear from the outset that they aren’t particularly nice people, and then have to work their way back into your favour), Frank is much more like somebody you’d expect to encounter in Sorkin’s West Wing: basically, a good guy. But, in classic Count of Monte Christo style, his desire for vengeance has turned him into a morally dubious force to be reckoned with, able to do whatever it takes to see his quest through.

Indeed Frank’s behaviour flips quite scarily across the feature – sometimes you feel like you’re behind him 110%, whereas other times you’re shocked by his cold, clinical decisions. It’s perhaps the Count of Monte Christo comparison that is both the show’s greatest asset and its biggest flaw, however. For, whilst House of Cards takes the Machiavellian vendetta and runs with it (rather than ruins it, like the vapid Revenge), it also fails to quite deliver a strong enough justification for Frank’s underhand plotting. Sure, it makes for great viewing to follow Frank on his conspiratorial campaign of revenge, back-stabbing with stealth and precision; manipulating the players to take out each other; and revelling in his satisfaction as he crosses each one of them off his list, but, ultimately, he’s still just a shady politico who got passed up for job promotion. There’s only so far you can go with rooting for him before you start to wonder whether he was justified in this kind of grand revenge scheming.

As the show progresses, however, we not only gain insight into just how far-reaching his power is, and how versatile his skills of manipulation are, but we see a better-developed core behind the character – and it’s in the knowledge that the show’s backers greenlit a 26-episode initial order (in other words, they shot season 1 and 2 back-to-back) that you can rest assured that there are grander plans for these wonderful characters. However good Season 1 is, it’s just the first half of a bigger story; one which, if handled right, has the potential to run and run.

In actual fact, the show’s backers – the streaming service Netflix themselves – arguably inadvertently provided some of the best publicity for it, when they announced that the entire 13-episode first season was going to be dropped on the network in one go. Netflix are attempting – somewhat successfully – to make history with this manoeuvre, which could put a dent in the desire for weekly TV shows. The idea is, of course, designed to capitalise on the fact that more and more viewers are binge-watching these TV shows. How many of us love to wait until we’ve got a whole slew of episodes (or even wait for the box set release of our favourite shows) and then watch them all back-to-back across a few days, or a couple of weeks? Netflix figured that why not deliver this: releasing the whole of season one at the same time, so you could stream the entire show without having to wait for the release of each subsequent episode. It’ll certainly be interesting to see how this affects other big players, but this tactic may deliver precisely what the public want and could, if it catches on, change the nature of TV programming drastically.

Publicity notwithstanding, there are plenty of reasons to pick up and stick with House of Cards. All the style and punch of a David Fincher production; the Machiavellian uber-plotting of a Dumas epic; and a cast of perfectly-captured characters which is simply to die for, headlined by Kevin Spacey, who is revelling in a much-deserved, latter-end career-high. Indeed, if this is the way forth for acclaimed actors and directors, then consider me sold. Highly recommended.