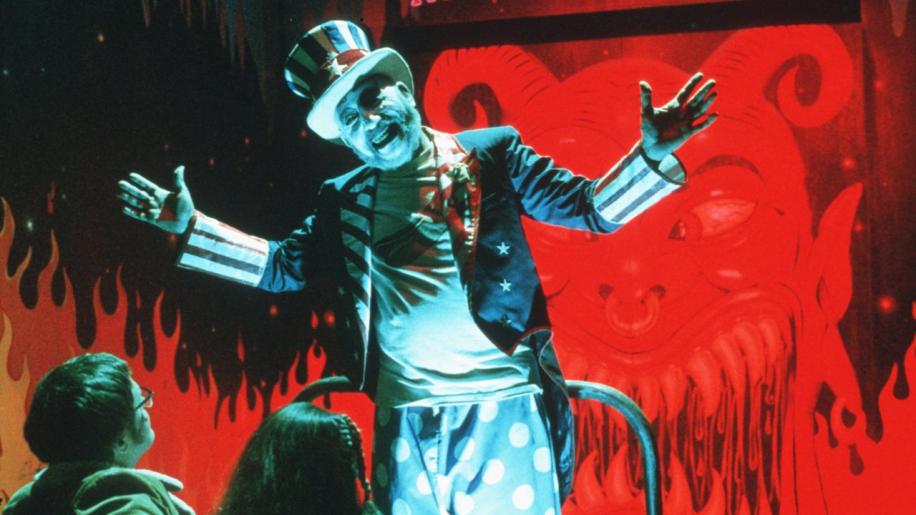 When this disc dropped on my doormat I really wondered what I'd done to deserve it. I mean, you only need to look at the title to be able to guess what this movie will consist of. And with “a Rob Zombie film” adorning the cover - his debut movie - ...well you just know this isn't going to be high-brow cinema.

Indeed, a close inspection of the plot reveals standard horror fare - we have an obligatory group of carefree American teenagers, who on the eve of Halloween find themselves exploring a bizarre roadside shop of horrors which is inhabited by none other than a clown, who directs them to the next bizarre place, a house which unsurprisingly is in the middle of nowhere...
Picking up a beautiful hitchhiker enroute (how convenient) the group unwittingly walk into the house to find a bizarre, inbred family with a taste for more than just Halloween pranks. Cue jumps and shocks aplenty, lashings of flapping skin, blood and guts and a sadistic edge that should satisfy even the most ardent of horror fans.

Let's cut straight to the chase here: House of 1000 Corpses is nothing new, nor is it very good. Actually, it's pretty terrible. With not a hint of originality, it splices together all-too familiar elements from dozens of other horror movies, complete with clichéd characters and a script so wooden it positively clunks with every line of dialogue. The plot strands and events are thrown into a big blender full of gore “money shots”, frantic camera-work, fast cuts and selection of different film stocks, but the end result is nothing but amateurish tripe.

Gore-fans may enjoy it as this is a movie full of nastiness, but I'd advise everyone else to steer clear. However given the title of the movie...you didn't really need to be told that, did you?