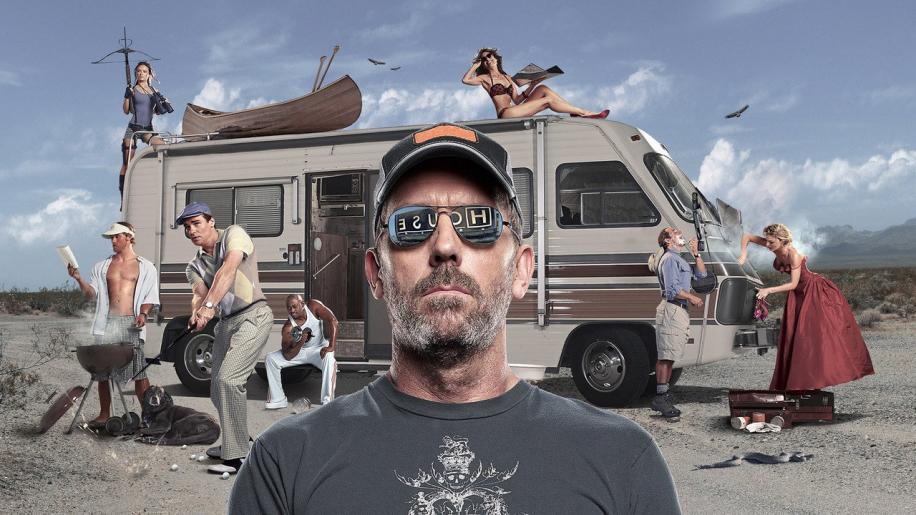 Well, I have to admit that I didn't really expect much from this in the image department, but Universal have come up trumps here, with an absolutely ravishing picture. Anamorphically enhanced, with an aspect ratio of a quite cinematic-looking 1.78:1, House looks tremendous. With only one or two shots throughout the entire season exhibiting any grain - and even then, only minutely - you can be assured that this House is visually in order from the get-go.

Featuring terrific blacks that add a rich degree of depth to the interiors, excellent contrast and a colour palette that is warm and well-maintained, each and every episode is delightfully pleasing on the eye. Blood is reassuring deep and red too, and all the more realistic. Funny how you love to see gouts of the stuff in horror and action movies, yet wince and squirm when it spurts in a medical drama. That cinematic feel is given convincing credibility with the show's sweeping and engrossing photography well reproduced on disc - the image is totally stable and smooth, betraying no hint whatsoever of motion drag, or juddering. And the often chaotic emergency scenes never look jumbled or lose definition with fast activity.

Skin tones are spot on - even for the orange guy in an early episode, who has a literally zesty glow - and detail, especially of faces, is incredibly well-etched. Particularly so in the case of House, himself, with Hugh Laurie's unkempt medial genius appearing as though he really is inside your TV set. And patients who gradually get sicker as an episode progresses, really do look ill, their skin going through some quite distressing shades. There's also some very atmospheric touches of lighting that the discs handle superbly as well, such as the sunlight shining through office blinds, etc.

On the downside, however, are a couple of only-slight niggles. There is some occasional edge-enhancement, though this is hardly distracting, and some slight shimmering on intricate patterns - such as walls of the elevator, some clothing and, most notably, upon the edges of some shiny equipment, when backlit, for instance. But, overall, these discs exhibit an exceptional image that truly does the show justice. Blessed with a Dolby Digital 5.1 mix, House does actually make good use of it. Whilst you should not expect any over-the-top dynamics whistling around the room, the steerage is pretty decent, nonetheless, with voices and atmospheric ambience well directed throughout an involving soundscape.

Excellent reproduction has each episode sounding full, clear and robust with a nice widening of the field across the front speakers, crisp and realistic dialogue and a fair degree of bass. The rears are occasionally permitted to chip in with some well-delivered ambience, too. The shock moments are treated to an acoustically jarring accompaniment, medical equipment beeps and hums with authenticity and exterior action (usually the lead-up to some poor unfortunate's collapse) is full of rich, bold atmospherics - screeching car wreck, loud and violent love-making(!) etc.

The score always comes across well, sounding both full-bodied and clear, yet can be insistent, ominous and driving with a nice sense of dramatic urgency when required. All in all, this is an excellent audio mix that adds immensely to the dramatics of what could have been relegated to a simple, dialogue-driven 2.0 channel mix. On first glance, it may appear that Universal have offered something quite interesting for this release. But, once you get into the bonus package - which reside on Disc 3 Side B - you'll quickly discover that we have here is really just stock filler.

The Concept (4.48 mins) has a few talking heads - Bryan Singer reveals that he was duped into believing Laurie really was American with his convincing casting tape, and the show's creator, David Shore, admits that he just wanted to do a cop show in a medical setting with a team of experts diagnosing the un-diagnosable. Hugh Laurie just seems pleasantly amused by the success of it all.

The Casting Session with Hugh Laurie is exactly that and runs for 1.23 mins. Medical Cases (4.24 mins) introduces us to one of the show's medical consultant/advisors, David Foster MD, who informs us that there is no chance of the series ever running of medical mysteries for House to unravel. Besides this tantalising snippet, the brief featurette offers little else.

Things lighten up a bit with the jokey Set Tour (5.37 mins) in which Jennifer Morrison and then Lisa Edelstein take us on a light-hearted trip around the rooms, labs, operating theatres and offices of the fake hospital. Although there is some almost subliminal behind-the-scenes footage offered up, it is perhaps meeting the pivotal diagnostic whiteboard that has become such a character in its own right that is the most satisfying. That said, though, it is always nice to be in the company of these two adorable ladies. Anyone else think that Jennifer Morrison looks like a cross between Nicole Kidman (the eyes and the sexy, quizzical eyebrows) and Ginger Spice (the gerbil cheeks), or is it just me?

House-isms (4.02 mins) takes a gander at the many wonderful, quirky and acerbic witticisms that the good, but irascible, doctor dishes out in the course of a working day. Hugh Laurie reveals that his character has a Black Belt, 5th Dan in Sarcasm. Folks, please do not try any of these lines yourselves as unprofessional use can only result in your own physical injury. House (6.36 mins) is a brief exploration and overview of the character from Laurie, Singer and Shore. It's funny to hear Laurie's voice without the accent, now.

So, not a great deal of worth here, really - but nice to have something though. Oh, yes, there's also some Universal DVD Previews for Revelations, Northern Exposure and Kidman's The Interpreter. Just what the doctor ordered. House is a brilliantly written, witty and compelling delight. Hugh Laurie is incredible in the title role and every episode has many wonderful moments to recommend it. The show transcends its Network TV formula purely by virtue of placing such a unique character as its front-man and, despite solid work from the rest of the cast, he justly dominates the entire series. We can all surely guess the outcome of each medical mystery, but the caustic dialogue, wealth of clever sarcasm and the whole refreshing, devil-may-care, says-what-he-feels attitude form Laurie's House raise what could have been just another hospital soap to an entirely new level of entertaining eccentricity. A standout show, folks.

This Season One package looks and sounds amazing. The AV quality is reliable and impressive. The extras are sadly all of the filler variety but don't let that put you off, as it's the shows themselves that are what we're after. I prescribe an episode a day. Very highly recommended.