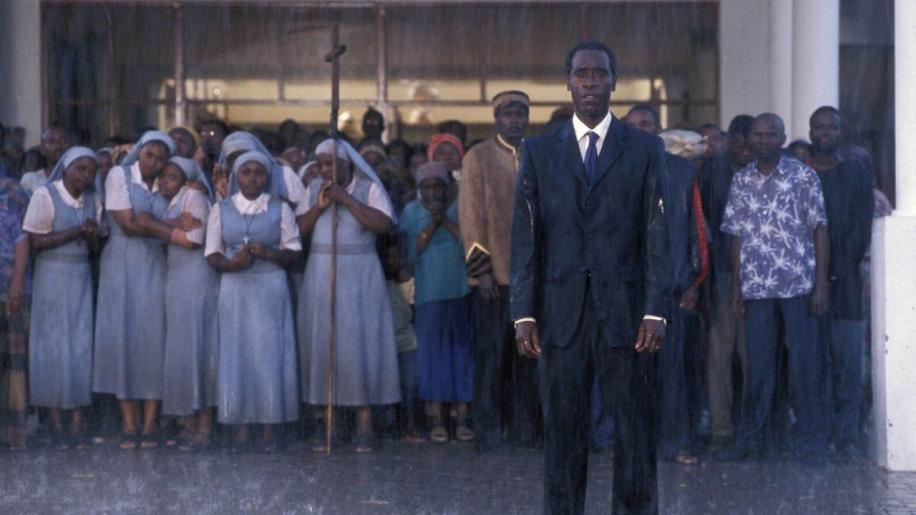 Don Cheadle stars as Paul Ruseabagina, a devoted father, husband and hard-working hotel manager of a four star Rwandan hotel in 1994. His kind, gentle persona has made him a popular man with his workers and guests, which include the local dignitaries and army members. But outside of the hotel, fear sweeps through the country, with conflict ongoing between the two main ethnic groups, the majority Hutu and the minority Tutsis, who have been fighting for decades. But when word spreads that the Rwandan president has been killed, Paul knows that a full-scale war has begun, and sets out to save his family. But, as the country descends further into madness, he finds himself helping those in need and hundreds of Tutsis refugees are brought to the hotel for shelter, until the authorities can intervene. However, sympathetic UN officer Colonel Oliver (Nick Nolte) informs Paul that no aid is coming from the West, despite the best efforts of the press (including cameraman Joaquin Phoenix) to show the world what is happening. Soon enough, thousands of people are dying by the hour and although Paul is desperate to get his family out of the country, hundreds more Tutsis refugees flood his hotel, leaving Paul no choice but to offer aid. Taking a journalistic approach to the film, director Terry George does a superb job in making the images that unfold before us as real and as genuine as they were a decade ago. His use of both hand-held camera shots and numerous close-ups perfectly capture the human elements to the story, rather than the war outside. In fact, we hardly see any of the conflict, with George instead using the desolate images of the aftermaths to devastating effect, giving us just the briefest look at just how harrowing an ordeal it was. Clearly fascinated by the films subject, George directs with great enthusiasm, but with an ultimate sense of fury at just how these atrocities were able to take place with no one from the West intervening. It is a question he poses to the audience, but George never forces the issue, or makes the film into any kind of political viewpoint. It is simply a frank depiction of the human brutality and deplorable events which took place, adding more emphasis on the already traumatic events, with such harrowing images as children covered in blood and women fleeing with their belongings which will stay with you for days afterwards. It's the brave but ultimately proper decision from George and screenwriter Keir Pearson to show the people, not the events, that make the film even more outstanding, using Paul Ruseabaginas' story, both of his family and the actions that he undertakes, as their way of showing that amongst all the bloodshed, true human sacrifice was unfolding. I have been a massive Don Cheadle fan ever since I saw him in Boogie Nights, but apart from his supporting roles in Ocean's Eleven and its recent sequel, he has never really earned the recognition he deserves, unlike other Boogie Nights alumni John C. Reilly and Phillip Seymour Hoffman, who themselves have become phenomenal character actors, as well as stars in their own right. But here as the caring Paul, Cheadle delivers his career defining performance, which as most critics have already stated, will turn him into a fully-fledged star. His majestic, poignant and raw portrayal of this courageous and noble man is breathtaking, and captivates the screen with compassion, wit and honour, never more so than in a heartbreaking moment when Paul, having seen all of the devastation that encircles him, lets his emotions get the best of him whilst doing up his tie and it's here where Cheadle cements this truly compelling acting accomplishment, which in any other year would have seen him walk away with every acting award there is. In addition to Cheadle, the supporting cast also shine in their roles: Sophie Okonedo is superb as Paul's caring wife, showing the same courageousness and emotion as Cheadle; Nick Nolte, who I last saw hamming it up horribly in Hulk, excels as the concerned and courageous UN solider, desperate to keep the peace, and Joaquin Phoenix, though in a cameo role, is his ever-excellent self as the distraught cameraman, trying nervously to keep his cool amidst the atrocities.