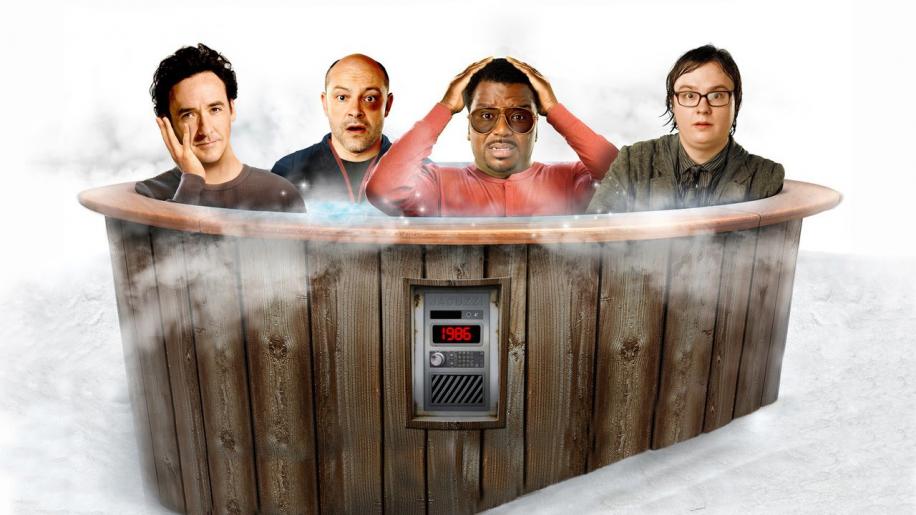 Every so often you hear the premise of a movie and it strikes you that, while you might not bother to go to the cinema to see it, you’ll keep an eye out for it when it’s released on Blu-ray. ‘Hot Tub Time Machine’ was one such movie for me. I thought the idea of a group of guys being transported back in time in a hot tub would provide plenty of opportunity for sending up the ‘Back to the Future’ series. Surely, with a clever script this could be just what we need – a really good laugh! Warning bells should have sounded when the box artwork boasted a quote from the News of the World which proclaimed “Choke on your popcorn comedy genius”. Upon starting to watch the film, my spirits sank as it felt leaden from the outset – aided and abetted by Steve Pink’s direction of an apparent suicide attempt. After 20 minutes the dull feeling in the centre of my forehead was spreading. Disappointment is a hard thing to deal with, especially when you feel that a golden opportunity has been missed.

We’re introduced to our ‘heroes’ who are old friends. There’s Adam (John Cusack), Nick (Craig Robinson) and Lou – alias The Violator- (Rob Corddry) as well as Adam’s teenage nephew Jacob (Clark Duke). Each of the three main characters has his own back story which basically tells how they’ve been beaten down by life involving divorce, alcoholism and drugs. Then there’s geeky young Jacob, who’s too young for life to have happened to yet but he’s well on his way to becoming a failure in the good old family tradition. By the time this has been revealed, you’re thinking maybe you should just eject the disc and watch something a bit more uplifting but you stick with it as surely it will get better when they all decide to go to a Ski resort where the three older characters had a debauched holiday back in 1986.

As they arrive in the now run down resort, they can’t believe how different it is from their rose tinted memories but they throw themselves into enjoying themselves when they discover a hot tub on the terrace of their lodge. Great, this is where the fun must start! Nah, not really. Anyway, after some drunken frolicking in the tub some booze is spilt on the control panel and our team is transported back to 1986 where they discover that they appear to others as younger versions of themselves. Unfortunately Jacob, who wasn’t born then, starts to flicker before our very eyes so there’s concern that they must not interfere with the timeline and act out situations as they remembered them. This involves Lou getting the stuffing kicked out of him by a ski resort pretty boy, Nick playing with a band and Adam being stabbed in the eye with a fork by an ex-girlfriend. Obviously my description must be making this sound a lot less fun than it actually is, but if I were you I wouldn’t bank on it.

The humour is of the ‘gross out’ type which involves most bodily functions, some pee, some poo, some projectile vomiting, a lot of swearing and a thoroughly distasteful scene near the end involving two guys that fans of ‘Deliverance’ might appreciate. There is one running gag that works quite well and that involves a Bellhop played by Crispin Glover (George McFly in ‘Back to the Future’ series) with only one arm in the modern day world. Back in 1986, he still has both arms and there’s conjecture as to which contrived situation will result in the loss of his arm – such as juggling with a chainsaw. Admittedly there’s a kind of ghoulish nature to the humour here, but it was the only one that really worked. The attempts to raise a laugh elsewhere were clumsy, clod hopping efforts that made me despair for the mentality of the intended audience. When Chevy Chase appeared as the mystical hot tub maintenance man my spirits rose as, surely, he would inject some life into the piece. It was sad to see someone of his comedic ability wasted in this role as there was very little for him to do and the script had him handcuffed at every turn. I just hope his Agent ensured he received a large fee.

It’s not very often that I come across a movie with so few redeeming features and in this respect ‘Hot Tub Time Machine’ is almost unique. I found it charmless, disappointing, unfunny and at some times disturbing. Apart from that, it was okay.