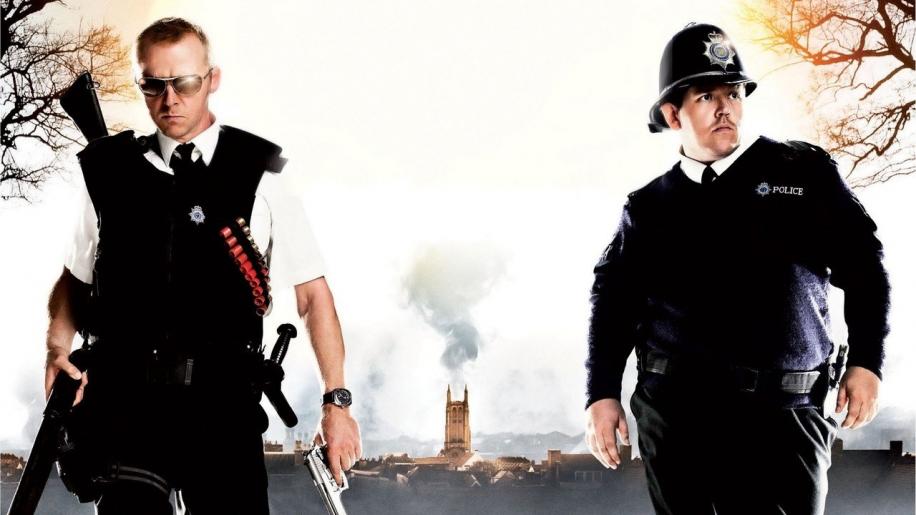 Surely there can't be many people left who haven't yet seen 'Hot Fuzz'?
Since its release in 2007 it has put a smile on the faces of many Buddy Cop action movie fans as it affectionately parodies that genre, while taking a playful swipe at a whole host of other iconic films along the way.
All the same, anyone who has been exploring the upper reaches of the Zambezi for the last two years now has the opportunity to watch it on Blu-ray in what's billed as the 'Ultimate Edition'.
Simon Pegg quickly followed up his success in 'Shaun of the Dead' with this cheeky comedy that propelled his career further upwards to culminate in him appearing as Scotty in the 'Star Trek' reboot.
His success comes down to the fact that underneath it all he seems a very likeable chap with the ability to even turn his irritating character in 'How to Lose Friends & Alienate People' into someone with whom an audience feels happy to spend time.

But back to 'Hot Fuzz'.
Over-enthusiastic London Policeman Nicholas Angel (Simon Pegg) is promoted to the rank of Sergeant, but it's a poisoned chalice as he's being carefully sidelined to the sleepy village of Sandford in Gloucestershire as he's making the rest of the Met look bad.
Upon arriving in the countryside idyll, even before he's got his size 10s under a desk he's already emptied the local pub of under-age drinkers, arrested someone for attempting to drive while under the influence and rounded up half the village on various minor misdemeanour charges - which endears him to the local duty officer not one bit by landing him with a mountain of paperwork.
Whilst proceeding about his duties the following day, our hero discovers that the drunk is a Police officer and also his future 'buddy' Danny Butterworth (Nick Frost) - a great fan of 'Bad Boys' and 'Point Break' as well as firing two guns simultaneously while leaping through the air. In a village where everyone knows everyone else, it comes as no surprise to find that Danny is the son of local Police Inspector Frank Butterworth (Jim Broadbent) who imposes a penalty on his boy of supplying the entire staff of the local nick with ice cream for a month as payment for his indiscretion of the previous night.
As fish out of water Angel carries out his urgent crime fighting tasks , such as rounding up an escaped swan, he notices that a number of rather gruesome deaths are suspiciously being brushed aside as accidents. His 'little grey cells' (not the ones where drunks spend the night) are stimulated and he begins to investigate.
Everyone in the village seems to have a famous face. The Hotel receptionist looks strangely like Billie Whitelaw (remember her as the Nanny in 'The Omen'), the local Neighbourhood Watch liaison person bears more than a passing resemblance to Edward Woodward (a link with 'The Wicker Man'), you'd swear that the local supermarket manager was James Bond (Tim Dalton) and around every corner is another character actor from the pages of the Spotlight directory.
The casting in this movie is superb and each 'face' clearly relishes their role.

The script, by Pegg and director Edgar Wright is just as good. It's kept tight, witty and full of references to American blockbuster action movies as a respectful leg pull.
The camerawork, direction and editing are world class too. Who'd have thought that a car chase involving two Vauxhall Astras could be as exciting as one involving a pair of growling Detroit V8 gas guzzlers.

The comedy largely centres on Pegg & Frost's characters and each turns in an earnest performance that makes the ridiculous situations all the more funny. Pegg plays Angel as an intense boy scout who wants everything to be clean cut with the Law applied to the letter while all the 'i's are dotted and all the 't's are crossed.

Frost's Danny Butterworth is in awe of Angel, as he has actually shot someone, and he dreams of the day when Hollywood type action sequences will come to rural Sandford. In fact, he hopes that one day, when he grows up, he will in fact be Sergeant Nicholas Angel. Much is made of his physique, such as in the fence jumping sequence where Angel nimbly leaps over fence after fence like a young Gazelle. Danny's attempt could at best be compared favourably to a stampeding water buffalo who has consumed a five course lunch.

Tim Dalton really launches into his role as Simon Skinner, the supermarket manager, with an air of bonhomie laced with menacing undertones. The fun really comes from seeing this former 007 send up his 'serious ac-tor' image.

The gunfights in 'Hot Fuzz' share much with those from 80's and 90's American actioners, but the tongue is firmly planted in the cheek.
The abiding image I recall from this film is of the lady on the bicycle firing two handguns in the style of John Wayne in 'True Grit'.
Even Clint Eastwood doesn't get off scot-free. As Angel returns to the village on his white horse with more armaments than an Aldershot garrison, a toothpick protrudes from the corner of his mouth as Ennio Morricone style music plays in the background.


This is a movie that's unafraid to gently take the mick out of everything that's gone before it on celluloid. The jokes find their marks and the timing is such that few, if any, fall flat. The reason they work is that it's all meant in a caring way. None try to be cleverer than the originals they refer to but simply aim to pay homage.
To get all the references first time round requires the eyes of a hawk and the hearing of a cat, therefore each repeat viewing rewards you with a new discovery.

So, if you've been stuck in the deepest jungles of Borneo for the last couple of years then you could do a lot worse than to take a break from your unpacking and unwind with 'Hot Fuzz'