You wanna be a big cop in a small town? **** off up the model village 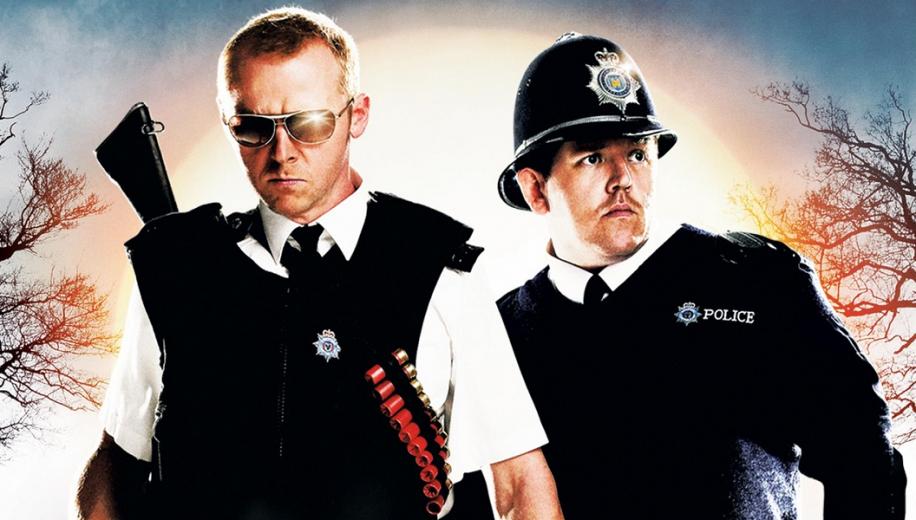 After the runaway success of their first feature film collaboration, Simon Pegg and Edgar Wright were given free rein to develop their second; that turned out to be a homage/spoof of the police action, buddy cop genre, and marks the second in the ‘Cornetto Trilogy’, Hot Fuzz.

Their idea was deliciously simple; take very Hollywood action trope and apply it to a rural police service. With that simple premise, not only did they successfully manage to send up the ripe-for-skewering genre but they also produced a blistering action film in its own right in the most meta way possible.

At the heart of the film is Pegg’s Nicholas Angel, an overachieving police officer who is moved to the country because he is too good; there he meets and forms a bond with a rural officer Danny, and together this buddy relationship blossoms where the actor’s natural friendship shines through the screen. The story is multi-layered with murder mystery, fish-out-of-water, evil community and action extravaganza, with, perhaps, the only flaw being the overuse of exposition when explaining the over-the-top narrative.


The cast is a who’s who of British talent with Wright keeping tension high, but not at the expense of laughs

Dialogue is snappy and quick, situations are farfetched but believable, and the whole is beautifully structured with cause and effect along with foreshadowing being used to terrific acclaim. The cast is a who’s who of comedic British acting talent with everyone giving a decent turn, and with Wright keeping pace and tension high but not at the expense of the laughs, Hot Fuzz, marks another win.

Hot Fuzz was shot using a combination of Arricam LT, Arricam ST, Arriflex 235 and Arriflex 435 cameras on 35mm film and finished as a 2K DI which has been used for this Ultra HD Blu-ray release. The disc presents an up-scaled 3840 x 2160p resolution image in the correct widescreen 2.35:1 aspect ratio, and uses 10-bit video depth, a Wide Colour Gamut (WCG), High Dynamic Range in the form of HDR10+, and is encoded using the HEVC (H.265) codec. We reviewed the Region free UK Ultra HD Blu-ray release of Hot Fuzz on a Panasonic 65DX902B Ultra HD 4K TV with a Panasonic DMP-UB400 Ultra HD Blu-ray player.

A somewhat disappointing image, this. The increased resolution barely brings out any more detail, some of the very finer points show marginal improvements, pore marks and hair lines in skin texture during close-ups for example, but you really have to be looking. Wider shots are even more marginal.


A somewhat disappointing image, this


Even more disappointingly, the WCG and HDR fail to really give the image any significant boost, indeed flesh-tones can occasionally look off, while colours have little impact. In one scene, when Danny is telling Nick to go after rescuing him, police lights bathe the screen in red and it does look significantly better; the depth of the red coupled with the increased black level makes it pop; but it is short-lived.

Black level is slightly increased, indeed the whole picture is slightly darker, with more going on in the shadows, while the white scale gives the occasional pop to highlights. But really the whole is frustratingly flat. The original source has been scrubbed clean, there is barely any grain, but there are no adverse effects to this, while digitally there are no compression issues.

The DTS: X track is a real humdinger! Effects are comically pushed (intentionally) to the limit, one might even call it over the top (the overhead channels are used to the full – and loud – effect during the climactic shoot out) and it can tip the scales somewhat to a top-down track that is a tad unbalanced. Or brilliantly over-the-top, depending on your point of view. Personally, I preferred the choral track behind the exposition of the hooded society in the churchyard, which echoes all around, while the exposition comes at you from the front. Far more subtle and satisfying.


Perhaps a bit too over the top to be demo material

Dialogue, itself, is clear and precise, given some directionality and sounds perfectly natural. Bass is thunderous, and again, comically over the top, with LF effects rattling the foundations. Ambient effects are well handled by the surrounds, while the score is taken care of by all the speakers. Perhaps a bit too over the top to be demo material, but if you want to give your overhead speakers a workout, put on the pub shootout!

The second in the ‘Cornetto Trilogy’, Hot Fuzz is not only a magnificent spoof that picks up on and showcases just about every trope of the genre, but is also a pretty good action film in its own right; with buddy cop, murder mystery, and over-the-top action sequences, the film also wins out with its witty dialogue and perfect friendship between the two leads. Outrageous but irresistible, Hot Fuzz is a winner.

As a 4K UHD set, the package from Paramount is slightly disappointing; the up-scaled image is soft, flat, lacking verve or any appreciable significant improvement over the Blu-ray; but the sound is deliciously over the top, with a very top-down heavy mix, with thunderous bass, especially during the action sequences. The extras package is identical to what has been available before and looks to be the exact same disc.