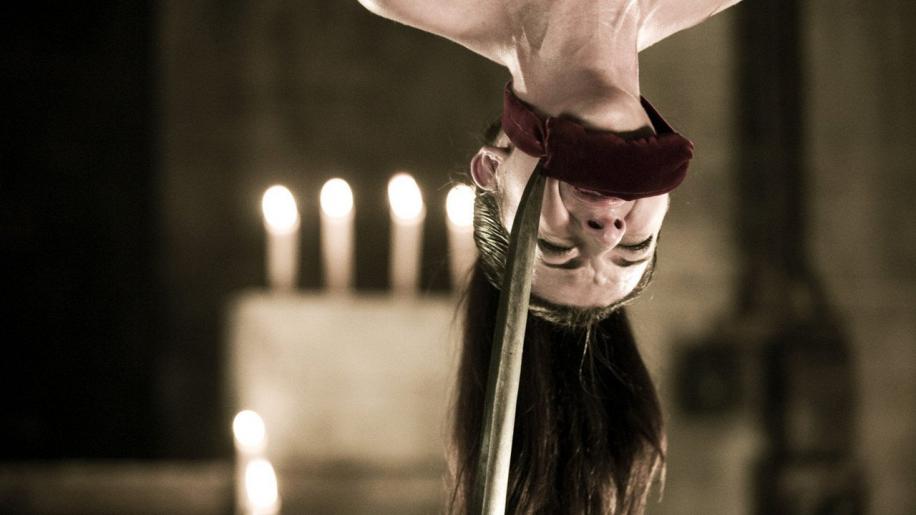 “Torture-porn” - a concept effectively captured by Eli Roth (Quentin Tarantino's sick accomplice) in the 2005 film Hostel. On its DVD release, I reviewed Hostel as being a highly unpleasant watch “designed to satisfy viewers' basest, most primitive and most depraved instincts.” It was a film that I have never chosen to revisit, not even on the eve of reviewing the sequel on Blu-ray. To say that it leaves a bad taste in your mouth is something of an understatement. So, could the 2007 sequel possibly be as bad? Or does it have enough developed ideas to elevate the movie beyond the torture porn genre that its predecessor created? Wishful thinking.

Three young female students, travelling to Prague, get into trouble en route and end up being helped out by a seemingly kind local girl, who takes them to a 'really lovely' Hostel she knows. It's not long before the partying and having fun leads to them being imprisoned in a dungeon and tortured to death in ways and manners that are hopefully beyond the imagination of most viewers who are not psychotic. Hostel Part 2 is just the female variation of Part 1, merely changing the sex of the three main characters / victims. There is some development of the conspiratorial side of things - more into the shady organisation behind it all, the bidding that goes on behind the scenes and the big money involved - but otherwise this is just a re-hash of the first story. This is welcome news to fans of Hostel, who will probably equally like this effort, but is it any good for those who didn't enjoy the first movie?

Honestly, no. Whilst its characters seem slightly more intelligent (they manage to avoid being drugged and captured for longer), and we get to know the rich 'pleasurers' that buy their bodies for torture, the end result is much the same. In fact, arguably, it is more tame than the first instalment. Apart from the first torture sequence, there is little more graphic horror, and certainly nothing even comparable to the scenes we endured in the first movie. Anybody who has seen Hostel is unlikely to have forgotten the infamous blowtorch sequence, and those who expect this kind of thing (if there is anybody out there) are going to actually be disappointed by the remarkable amount of 'straight' horror on offer here. I know what you're thinking - surely this is a good thing? I mean, without all of the shock-gore, maybe they could have made more of the story and the characters? Maybe they could have developed the whole conspiracy angle and given us some kind of resolution? Well no, even diluted, Hostel part 2 merely continues the torture of the first instalment and prolongs your misery. And the final couple of twists are absolutely ludicrous.

The cast are largely forgettable, their characters stereotyped into the geeky Lorna (Heather Matarazzo - Scream 3, The L Word), the vacuous blonde Whitney (Bijou Phillips - Bully, Havoc) and the more mature, more refined Beth (Lauren German - The Texas Chainsaw Massacre Remake). Then there's the striking Vera Jordanova, playing the femme fatale who lures them to the Hostel in the first place. She's got even less character than that twin-silenced-SMG-toting-lingerie-wearing chick from the second Transporter movie (and only slightly more reason to under-dress the way she does.) On the male front it is little better, the ominous old businessman at the head of the underground organisation and the various bidders are figureheads, and whilst two of the torturers - Richard Burgi (from the first season of 24 and the DTV sequel to Starship Troopers) and Roger Bart (Desperate Housewives) - get fleshed out a little more, are we really supposed to regard their frequent chats as justification for what they engage in?

Of course this is the 'Unseen' version of the movie, supposedly even more gruesome. Well, if that's what you were looking for then you're going to be even more disappointed. I can't imagine what the cut version was like, as even in its more uncensored form it does not - for a second - hold up alongside the sheer disgust that can be invoked from watching the first instalment. Still, whilst you may not get so much of that sick feeling inside (that comes from watching people being tortured for pleasure), the sequel still feels like a fairly pointless watch. It's cynical, somewhat depraved and leaves you with that distinctive bad taste that comes from watching stuff like this.

It's funny because the concept behind Hostel is quite clever, and - if explored properly - could have been thoroughly haunting, scary and horrific, as I am sure it was intended to be. Instead, Eli Roth (under the supervision of Tarantino himself, no doubt) goes for severed heads and cannibalism, ideas which have been done better in everything from Sin City to Hannibal, and fails to even achieve the same shocking standards of his first effort. I should be thankful, but without the ability to even shock, there is simply nothing else left for this movie to offer. Roth, try watching Dog Soldiers or The Descent to learn how to create characters we care about, or the original Japanese Ring movies to learn how to scare without needing to show intestines. And stop making torture porn. No more Hostels please.