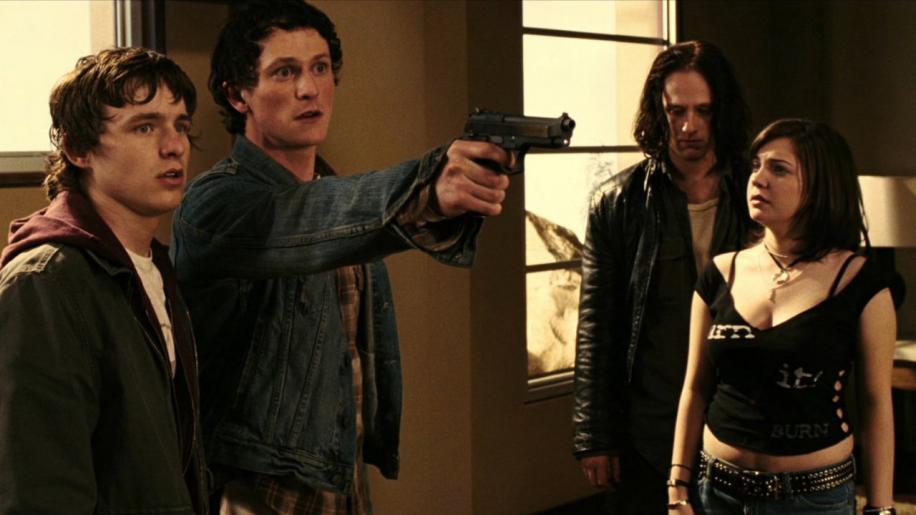 Former hostage negotiator turned town sheriff, Jeff Talley (Bruce Willis) finds himself confronted with the ghosts of his past when a failed robbery results in a family held hostage in a mob accountant's house. Forced back into action after the shooting of one of his own officers outside the house, he soon finds that saving this family is going to be only half of his problem. Inside the house is a DVD containing information that could put a crime lord away, and the mob will stop at nothing to get it back. Even down to taking Talley's own wife and daughter hostage to ensure his full co-operation. Dilemmas, dilemmas ...

Spare a thought for poor Bruce Willis - when he's having a bad day, it's a really BAD day. I mean forget Jack Bauer's iffy wrong-side-of-the-bed mornings because Bruce has saved tower blocks, airports, cities and even the world from Armageddon (though sadly he couldn't save us from the film, unfortunately) and most of this has been done whilst on vacation! Yet here in former video-game helmer Florent Emilio Siri's feature debut, Hostage, what should have been a relative walk in the park turns into a whopper of a headache when three twitchy teen tearaways embark on a crime-spree and pick totally the wrong house to break into. After bludgeoning Kevin Pollack's filthy rich mafia book-cooker, Walter Smith, tying up his teenage daughter Jennifer and her resourceful kid brother Tommy, the hair-trigger trio decide they want the standard issue helicopter to whisk them away to an unlikely freedom. Oh, and they'd like to take the millions of stashed dollars they've just found, with them, too. The mob will obviously have other ideas.

“I'll take care of your father. I'll get him some ice for his head ... maybe a pillow.”

The bad boys that kick-start this mess hail from purely derivative stock. Dennis, the nominal leader, is really only playing up to the nastier, much more hardcore Mars (that Hills Have Eyes moniker should give us a clue as to his true lunatic tendencies), whilst his younger brother Kevin is stereotypically the nicest, and therefore, the weakest link in the chain. As Dennis, Jonathon Tucker - looking a lot like Lock, Stock's Nick Moran - is all on-edge, a dangerous bag of jitters who knows that he has got himself caught up in a situation that is spiralling way beyond his control. A frightened kid, he struts and barks demands with escalating panic turning his voice into a whine. His penchant for swearing with every other word may be authentic but still grates when you consider that someone probably wrote all this down for him to say. As the psychotic Mars, Ben Foster does a great impersonation of Brad Dourff, though sadly, once he turns into a full-on, helter-skelter, Molotov-cocktail-wielding maniac he becomes unconvincing. Despite all his homicidal antics, he never feels like a credible threat. Someone should tell him to shape up because that's Bruce Willis out there. Even Pollack's oily Mr. Smith lacks the necessary weight for a seasoned mob accountant whose life and family are in jeopardy, though, admittedly, he does spend half of the movie in an unconscious heap on the floor.

Far better value is young hostage, Tommy, played by Jimmy Bennett. He is strong-willed and resilient, courageous and quick-thinking - a firm Hollywood staple with these plucky kids in peril, I know, but given the harrowing potential of the scenario we should be grateful for that. His crawlspace scampering through the air-vents of the house are a neat reminder that Die Hard's John McClane is just outside with guns and gaffer-tape. Even Jennifer manages to ditch the hysterics that could have gone against the fast-paced narrative, despite the unpleasant advances made from Mars. In this respect, I'm actually quite surprised that the children-in-danger theme was toned-down and played with a much keener sense of action and excitement, rather than the all-too-easy emotional manipulation of dread and anxiety. And this really does lift the film out of the normal formula that could, otherwise, have dragged it through the TV Movie Of The Week mire.

“I know, I know ... but at least they are still alive. From this point on, you control what happens to them.”

But, of course, it's Bruce Willis that we all want to see back in action. And, folks, he's terrific. Playing it by the numbers with a character that he could probably perform in his sleep is hardly a stretch, but with that expression, that shiny head and that cold gleam in his eye - boy, does he prove that Moonlighting is such a long, long time ago. The initial tragedy, set a year before, that sees him leave LA for the forested hills of the suburbs is an exquisitely overwrought sequence that truly galvanizes you. Check out the dead-on seriousness of the SWAT guys as they zero in for the kill in the pivotal hostage-rescue-gone-wrong that opens the movie. The image of Talley gazing, grief-stricken at a young boy's blood on his hands is a powerful and potent statement, and Willis imbues it with a true sense of his spirit fleeing his body, only to be replaced by guilt. Likewise, his frantic and horrific discovery that his own family have been taken away from him by Mr Sinister Voice leaves a nasty, acidic taste in the mouth. These may be knee-jerk moments that really can't fail to hit you hard, but it still takes tremendous presence to have them permeate a character so indelibly. One quick gripe, however, is the ease with which Talley slips back into negotiator mode. For someone who has been burned so badly, and intimately, he turns on the professionalism a little too quickly. One or two pensive moments, moodily shot amid the dark trees outside Smith's house don't really reveal a man fighting against those inner demons. Though, this is more the fault of Doug Richardson's screenplay adaptation of the novel by Robert Crais, which seems reluctant to hamper the proceedings with haunting its hero too much. And, in Siri's capable hands, this becomes a good excuse to keep the tension high and the pity held in check.

“But you said you weren't the guy!”

Siri's direction is stylish and emphatic. He loves 40's noir, shading the look and tone of his film with a palpably dark threat, the good guys and the bad guys prepared to go to menacing extremes to get what they want. But he also draws much reference from the gritty and tense thrillers of the 70's with fast, hard violence and grave sense of all-pervading doom. And yet Hostage still remains a slick and modern Hollywood product, for all its throwback character. The photography is ravishing, showcasing an incredible use of the widescreen image. With skilful compositions that serve the story without drawing attention to themselves, Siri widens and deepens the movie to heighten character beats - like the isolation of Talley's plight, or the tight claustrophobic chase through the air-vent. Even the relatively small-scale scene set early on within the kitchen of Talley's frayed homestead features a lovely combination of filming and editing to assure us of the alienation that he still suffers. It's clever stuff, indeed and always looks wonderful. Though, the temptation still remains, to say that this is merely an exercise in style over substance. Even the majestic score from Alexandre Desplat, which is a beautifully overcooked slice of Elmer Bernstein's re-interpretation of Herrman's Cape Fear interlaced with driving, resonant action cues to form an excitingly moody mean-theme, is possibly too grand for the film it decorates. But, taken as a whole, the film delivers all that you want for a star that is now driving himself back into his rightful place in the Action Hall Of Fame. The next stop after this was Sin City. I think we can safely say that he reached it, all right. Case closed.