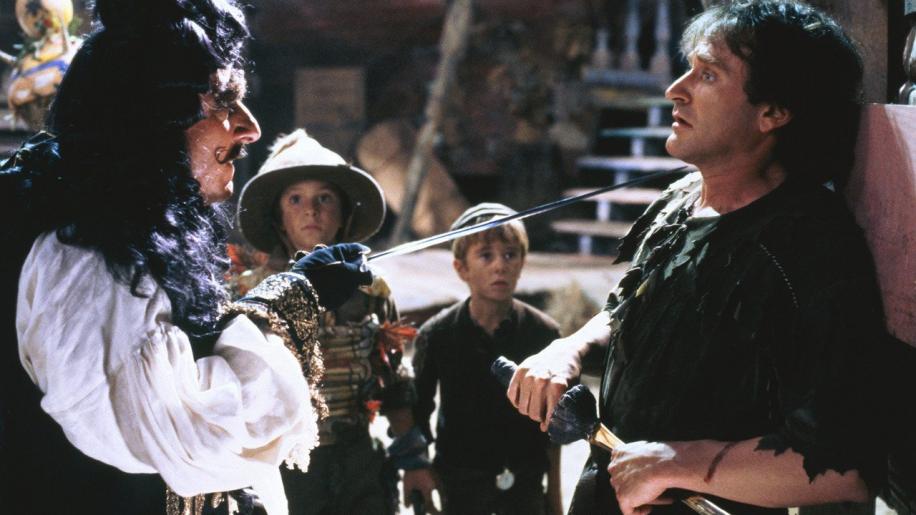 The first thing that strikes you upon spinning this disc is how clean the print looks. Indeed, the opening minutes of this superbit edition promise much, with the half-lit scenes rendered with wonderful detail and clarity. The shadows are solid whilst retaining composure, with not a sign of blockiness or any other nasty artefacts, and I couldn't detect any print defects such as scratches or dirt (remember this movie is 12 years old).

At 4:30 we see a view of the baseball match spectators through the fence: not only is this particular scene very detailed, but the colours are solid and three dimensional, with no perceivable bleeding: indeed, the reds and the blues are striking in their clean-ness. The detail and colour vibrancy continue to be demonstrated throughout the film, which by its nature is bold and bright with lots of use of colour. When we meet Captain Hook for the first time and he delivers his (fantastic) speech, we are treated to views which are fantastically detailed, in particular Hook's intricate outfit which could otherwise easily end up as a blurred mess of colour. Another excellent example of detail, too, is the moment around 1:22:00 where the camera zooms into Captain Hook's face. It goes without saying that the skin tone looks authentic, but the level of detail reveals every wrinkle and pore in Hoffman's face - in short it's superb.

It all sounds good so far, but the video transfer is not without problems. Despite initial impressions of a clean print, there are gremlins that do pop up throughout the running time. The Pan-Am flight (6:00) is so obviously taken from different film stock that it's laughable: the print changes from clean to scratched, grainy and dirty in a split second, although Columbia can be forgiven as this was undoubtedly how the original looked in the cinema. However, that said Columbia can be charged with the crime of Edge Enhancement. Whilst not apparent in every scene, I found it's presence regular enough to become annoying. Character outlines often show ringing - sometimes very pronounced - and although it may pass unnoticed on some displays, those with projectors or large screen TVs will undoubtedly notice it, and particularly if sharpness boost is used (it's worth noting on the review 7' screen, with sharpness on the projector set to zero, that edge enhancement was still visible).

The print also shows it's age as the movie progresses: apparent mainly against light backgrounds, scratches and marks appear on the print sporadically, and grain is present in a small number of scenes. Also a couple of scenes do betray a touch of softness (Dinner Speech being one, around 20:00).

Overall the transfer is solid and relatively clean - the flaws of age are relatively minor - but edge enhancement is the biggest drawback.

On offer here we have a choice of Dolby Digital and DTS soundtracks, the standard for any superbit release. Both of these offer a mainly front-locked soundstage that is more workhorse than thoroughbred in it's presentation. Dialogue is clear and crisp and will certainly give your centre speaker a workout, but steering doesn't strike as being particularly precise. It's not that it's in any way bad, it just feels rather flat. In fact, the whole soundtrack feels flat and 2-Dimensional.

As I've said, the action is mainly locked to the front soundstage, and although the rears are used occasionally, it's never something you're particularly aware of. When they do spring to life it's only when the musical score kicks in, and John Williams superb compositions fire on you from all angles. The only exception to this is around 1:44:00 when Pan talks to Tinkerbelle in her clock: his voice fills the whole soundstage as the rears spring alive with speech. Sadly this is it however.

It's also worth noting that LFE is confined mainly to the musical score also: many of the action sequences lack weight, with onscreen events rarely extending below 80hz (to the naked ear). The music, however reveals depth and weight, and kicks out the occasional low-bass note or two.

Overall the soundtrack is workable but nothing outstanding - as it stands this is crying out for some kind of remastering. Comments above stand for both Dolby Digital and DTS, no real-world difference could be distinguished between the two.

None, this is a superbit title.

A great piece of family entertainment if you don't mind sickly sweet kids, this Superbit edition offers a great picture coupled with a rather uninspired soundtrack.