Home of the Brave Movie Review 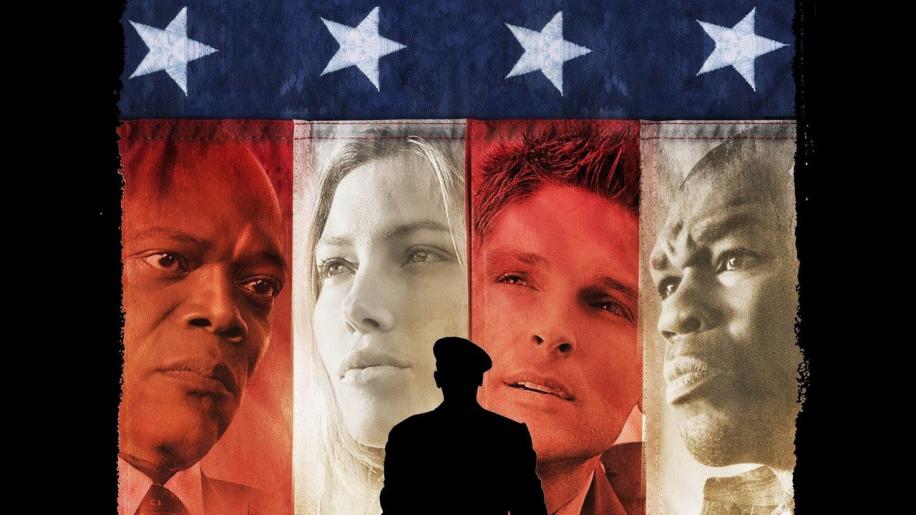 It was only a matter of time before the Gulf War got the same treatment as Vietnam by Filmmakers. Both being very controversial confrontations, whilst the war films released in the seventies and early eighties often adopted a start anti-war approach, it is much harder for films about the Gulf War to be quite so blunt. Perhaps not enough time has passed or perhaps it's because the so-called “War on Terrorism” (By the way, as a matter of law, War can only be declared against a Nation, so the concept of declaring war on 'terrorism' is both illogical and illegal) is an ongoing thing, leaving filmmakers unable to ever truly and honestly express how they feel about the conflict. Or maybe we just covered it all before, after Vietnam. After all, we have explored torture and mistreatment of POWs and innocent civilians on the other side in everything from Casualties of War to Platoon, as well as the damage done to both the soldiers and their families by the experience itself, in such masterpieces as The Deer Hunter and Born on the Fourth of July, as well as perhaps more ethereally in the seminal Apocalypse Now. Basically, it's all been done before, and by some of the best Directors and Actors out there. So, the question is, does Home of the Brave manage to inject something new into the mix?

After a horrendous ambush by insurgents in the Gulf, four disparate surviving soldiers return to Washington and are forced to deal with the physical and mental damage done to them by their combat experiences. Tommy Yates (Brian Presley) was the least physically affected, but nevertheless he finds getting his job gone, his father mocking him for even mentioning P.T.S.D. and the prospect of working in a cinema kiosk even less attractive than going back into battle. Jamal Aiken (50 Cent) suffered a back injury and had some pretty traumatic experiences, but he too finds it almost impossible to gain employment, making him even more bitter than Yates, who was his team leader in the conflict. Will Marsh (Samuel L Jackson) was a field surgeon and saw some true horrors whilst overseas, and he finds more comfort at the bottom of a bottle than in the arms of his sympathetic wife and estranged, rebellious teen son. Finally, Vanessa Price (Jessica Biel) lost her hand during the explosive ambush, and finds resuming a normal life almost impossible, let alone recovering her own self-esteem.

Home of the Brave is a movie of moments. The opening gambit is a horrendous example of War at its worst, mirroring somewhat some of the early battle sequences in Born on the Fourth of July. Later we have some nice scenes between the character of Yates and his, fairly blunt - but nevertheless caring - father, uncomfortable sequences with Marsh and his family and tragic moments for both Aiken and Price, the latter finding relationships a particularly difficult obstacle given her terrible disability. Unfortunately, as a fluid movie discussing the horrors of war and the very real significance of the P.T.S.D. that these soldiers suffer, in varying degrees, the result is fairly disjointed and - at times - a little slow. Much of the reason behind this is because it has, as aforementioned, all been done before in the plethora of 'Nam tragedies, but often the fault lies in the characters and the performances that bring them to life (or don't, as the case may be).

Samuel L. Jackson is the big name on board, but his character takes a while to develop at all, being given a last, desperate lease of life only towards the end of the movie. Jackson does his best with the limited material but, whilst it is nice to see him play a slightly quieter character than is his norm, the end result is both a character and a performance that would be better suited for a TV movie than a cinematic endeavour. The gorgeous Jessica Biel fares slightly better here, as the extremely sympathetic girl who finds her whole attractiveness brought into question after she loses her hand. She has yet to truly prove her mettle, although it is clear even in flashy movies like the fairly shallow but viscerally enjoyable actioner Stealth that she has more than just a pretty face to offer. 50 Cent. Well, what can I say? Is this rapper really going to be starring opposite DeNiro and Pacino in an upcoming cop thriller? Why does he keep getting roles? His horrendous biopic Get Rich or Die Tryin' should have been enough to seal his fate, but he keeps landing big parts and it seems clear that studios just want to cash in on the huge fan base that will watch his movies just because they like his music. He's the least well-developed (and arguably least sympathetic) character, grumbling and exploding into violence at every opportunity, and - as an actor - unable to fully depict the effect of the horrors he has endured, other than to adopt a stoic Steven Seagal look of ambivalent stupidity. Ironically, the least famous of the bunch - Brian Presley - is probably the best thing about this movie, and his scenes with his tough blue-collar father (played to perfection by Vyto Ruginis, who you may recognise from bit parts in Cliffhanger, E.R. and The Unit) and amongst the best in the movie. We also get brief unmemorable contributions from Christina Ricci (who has come a long way since the Addams Family) and Chad Michael Murray (who is much better in One Tree Hill).

All in all, this movie would have probably worked better had they included these plots in a four-part TV series or even a TV movie, and this is clearly reflected by the fact that - despite the big names on offer - it absolutely bombed at the Box Office. I don't think that audiences want to see any movies about P.T.S.D. at the moment - particularly those who are annoyed that there we went to war in the first place - and those who do could easily have a more enjoyable, and more poignant time watching the old 'Nam classics The Deer Hunter and Born on the Fourth of July. There is nothing particularly new here, and certainly nothing worth making a full-length feature about. It's a shame because the movie does have its good moments, but as a whole it just does not hold together or provide anything significantly new. Recommended for rental to test the waters.