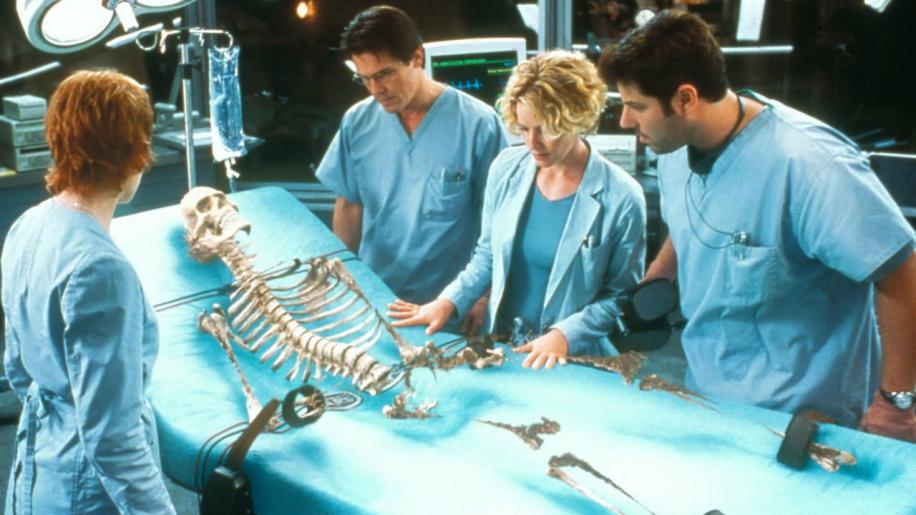 Another day, another Verhoeven flick makes it onto our beloved Hi Def Formats. Directed by the master himself, and starring Kevin Bacon, this could not possibly fail, surely?

Hollow Man stars Bacon as Sebastian Caine, the leader of a group of Scientists who are working on a secret experiment for the Pentagon. The aim is to be able to “phase shift” people so that they can become invisible, and then be brought back visible again. The aim is to use this power to create a covert fighting force.

Caine is supported in this by his ex girlfriend Linda McKay (Elizabeth Shue) who is now seeing another member of the team Matthew Kensington (Josh Brolin). These three are the main triumvirate of the team, although they are supported by a few other scientists.

As the film starts, they are about to successfully bring back a gorilla from the invisibility stage - something that they manage successfully. However, the three choose to keep this from the Pentagon (under Caine's instructions) in order to proceed to stage three (human testing) without interference.

This they do, and they successfully “phase shift” Caine - only to discover that it is not actually possible to bring him back. The longer he spends invisible, the less he wants to come back - until finally he flips and does everything he can to avoid his secret being discovered.

Hollow Man is a film that is indicative of just how far Verhoeven fell in the Hollywood stage of his career. He is a director who had a unique and challenging vision, as evidenced in his early work including Robocop and Total Recall, yet all Hollow Man offers us is a formulaic Hollywood thriller with a few bits of added gore. Any of Verhoeven's trademark subversions are not present here.

That is not to say that Hollow Man is a complete disaster. Even seven years later, the special effects still stand up as being extremely impressive indeed - and they really do create the sense of the titular character. Using clever techniques like smoke, and water, they are able to show the invisible man moving around when they wish to, whilst also using a latex mask at times to show where he is. The result is rather unsettling, and extremely clever.

The major point of the film, however, is that it seems any serious plot development has gone by the wayside. It is just a high concept vision. Someone, somewhere, seems to have realised that visual effects have advanced to the stage where we are able to produce the amazing effects seen in this film, and gone ahead and done it with no idea of how the whole film will actually hang together.

We therefore get nonsensical plot decisions like the team withholding information from the Pentagon, and carrying out dangerous experiments on humans without a thought to the consequences. There is no discussion over these issues. Whenever difficult questions are raised, they are never debated. They are just dismissed and the consequences ignored.

This also leads to the second major flaw in the film. It is very hard to feel any kind of empathy with the characters as they are portrayed, as they are all simply so unlikeable, or stupid, or both. This is not the fault of the actors, who do their best with the material presented, but by the end of the film, you are beginning to decide that actually you couldn't care less if none of them survived.
Finally, the essential ingredient that is missing here is any kind of subtle build up and terror. The potential, with an invisible man around, to slowly ratchet up the fear factor is there, but instead Verhoeven seems to be having fun with the material - almost as if he is saying to the audience “Yes, I know this is Crap and doesn't hold together - but just look at that effect! Isn't it clever?” He is a man who is clearly relishing the high budget, and is intent on showing you every penny on screen - moving you on quickly past the cracks to wow you with the next audacious camera move.

It sounds like I hated Hollow Man but the truth is I didn't. I have seen the film now many times over the years, and it always seems to hold my attention when I come back to it, despite the flaws. The fact is, despite the problems already mentioned, even Verhoeven not firing on all cylinders is still better than most directors who would be working with the same material.

When it comes down to it, the film is your typical Saturday night, spectacle movie - and when taken as that it IS an enjoyable film. Just don't expect it to match the heights of some of the genre classics that we have seen over the years from this director.