Hobo with a Shotgun Movie Review 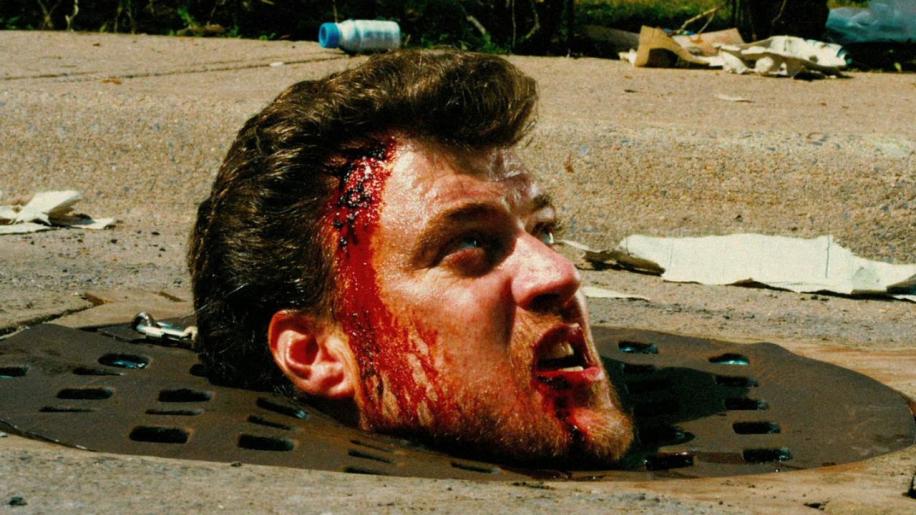 Modern grindhouse films have been a bit hit and miss. A daring attempt, primarily instigated by the combined filmmaking talent of Quentin Tarantino and Robert Rodriguez, their opening salvo was nowhere near as successful as they had hoped for. Few cinemagoers were prepared to sit through a bum-numbling 3+ hours of this kind of material, so the complete ‘grindhouse’ experience went largely overlooked first time around – the directors having to then split their films into two separate releases in an attempt to recoup some of their losses. Personally, I quite enjoyed Death Proof – it had some great characters, some good dialogue, and some superb stunts; even if it was marginally ruined by a somewhat ill-fitting almost-comedy ending. Planet Terror was also strangely fun – more frivolous in its over-the-top gore, ridiculous plotting, and, mainly, in its stripper-with-a-machine-gun-for-a-leg protagonist; but still pretty enjoyable.

As part of the project, the filmmakers invited a host of other talented directors to create a bunch of fake trailers for the fake interlude between the Grindhouse double-bill: Rodriguez doing his own one for the long-gestating project of Machete (with Danny Trejo); modern horror remake director Rob Zombie crafting Werewolf Women of the SS (with Nic Cage); Edgar “Shaun of the Dead” Wright giving us the hilarious Hammer Horror spoof trailer Don’t; and Eli ‘Hostel’ Roth’s Thanksgiving with Michael Biehn. Thus far only one of these has been made into a movie – the most viable project being the one which Rodriguez had already written, Machete, which went on to become a fairly enjoyable over-the-top revenge actioner with supporting contributions from everybody from Robert De Niro to Steven Seagal. But there was one other trailer which was commissioned: as part of a competition for upcoming new filmmaking talent to provide their own trailer to go in with the rest. Canadian filmmaker Jason Eisener won, and thus Hobo with a Shotgun was born. It would go on to become the second of the faux trailers to be made into a full feature.

The story follows the arrival of a homeless vagabond at a place called Hope Town, but more appropriately dubbed Scum Town by graffiti artists. The town is run by a harsh and sadistic psychopath called The Drake, and his two equally nasty sons, Ivan and Slick, who mete out their sick form of justice on all those too poor to escape their vice-like grip. The hobo witnesses their violent acts, and, eventually, strikes back in order to save the life of a young prostitute named Abby. Of course The Drake and his sons are none too pleased, but their angry reprisals against the Hobo only further fuel his killing spree; he takes to the streets with a shotgun to punish the guilty the only way he knows how.

Fans of the earlier Grindhouse entries – Death Proof, Planet Terror and Machete – should be wary of going into Hobo with a Shotgun expecting more of the same thing: after all, it is a very different animal indeed. Without the smart Tarantino dialogue from Death Proof, it is forced to rely on the kind of extreme gore you might remember from Planet Terror (and, to a certain extent, Machete), only here without any of the subversive knowing parodying of the relevant genre flick. Hobo barely seeks to poke fun at the schlock-horror gore films that it is derivative of – instead it just revels in their outlandish excess; bathing in the very same buckets of fake blood, the same wanton dismembering and exploding heads. Ever remember a rather odd, over-the-top horror film called Braindead, directed by none other than Peter ‘LOTR’ Jackson? Well, that’s about the closest comparison I can come up with. Although even that comparison does not always stand up: indeed, there are times when Hobo makes Braindead look positively good.

In fact, there is very little positive that I can say about Hobo. It is painfully violent, nauseatingly gory, flagrantly amoral, and basically just an extremely unpleasant watch. There is almost nothing redeeming about it. Try as I might, every time I came close to enjoying a scene, it would devolve into unnecessarily graphic violence, not just pushing the boundaries of sensibility, but trampling all over them with steel-capped size 12s, and then laughing as a bunch of school-kids get torched by a maniac with a flamethrower. I really don’t have any problem with a bit of mindless excess – Planet Terror succeeded quite effectively in this regard – but Hobo takes to an almost-Hostel level of sadism, which permeates near-every scene. It’s just relentlessly unpleasant to watch.

Ever since The Hitcher and Blade Runner I’ve enjoyed the screen presence of Rutger Hauer, and in his latter working life he has delivered some decent supporting cameos in the likes of Frank Miller’s Sin City and Chris Nolan’s Batman Begins, and I couldn’t think of a better actor to choose to play the titular avenger in Hobo with a Shotgun. Indeed he does occasionally succeed in breaking free of the clutches of the depraved narrative, and undoubtedly makes the most of the character, attempting to give some depth to the lines he delivers, and to his character’s own personal path. Hell, even his partner in crime manages to get her head above the water occasionally – newcomer Molly Dunsworth – playing the tough-but-vulnerable prostitute with more than anybody could have expected from her in a film like this. But, at the end of the day, it’s all in vain, unfortunately, as even their performances do not come close to redeeming and saving this piece.

Ultimately, there will likely be some who can stomach the depraved schlock-horror grindhouse exploitation in-the-extreme that is Hobo with a Shotgun, but even they will probably find that this is an extremely flawed exercise in pure excess – the few average ideas that it has buried under all the buckets of fake blood totally obscured by the rest of the mind-numbing narrative. Yes, some might excuse it – and certainly I wanted to; I walked into this film expecting it to be silly excess nonsense, but not expecting it to make Machete seem like A-grade action – but, at the end of the day, many will be drawn in by the film’s distant cousin blood ties to the rest of the modern grindhouse entourage: Death Proof and Planet Terror. Really, I’m here just to warn you – it’s nothing like them; it may well be nothing like you have ever seen before. And not in a good way.