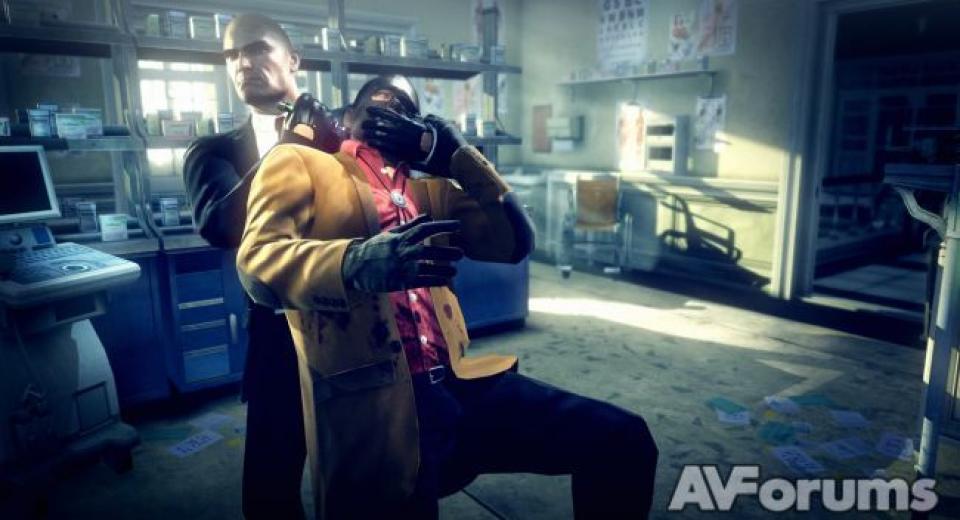 Hitman games have traditionally represented the high water mark of stealth sandboxes, but a muddled promotional campaign left many of us wondering exactly what type of experience IO Interactive were trying to create with Absolution.

Now that the game is with us the confused publicity makes more sense. Many of the changes to the series’ core gameplay don’t appear to have been led by an overarching vision for the Hitman franchise. Instead, they seem to have been motivated by technical limitations and a completely misplaced desire to tell a more a personal and affecting story about Agent 47.

The result is a game that feels riddled with compromises. Floundering between evolution and revolution, Absolution attempts to please old fans and woo new ones, but doesn't fully succeed in doing either. It’s no wonder the marketing department struggled to sell the product coherently.

The campaign starts out promisingly enough. All the early signs suggest that despite six years passing since Agent 47 last flexed his fiberwire, Absolution remains true to Hitman’s roots. The tutorial is a linear sequence that sees our barcoded anti-hero infiltrating the property of his former handler, Diana Burnwood, under orders to kill her. For those familiar with Blood Money, the section plays in a similar way to the theme park level, swiftly and intelligently introducing the key mechanics that will see the player through the rest of the game.

The most striking change to the gameplay is the addition of Instinct Mode, at the cost of the previous games' real-time map. Like Arkham Asylum’s Detective Mode and the myriad of other knock-offs, it allows the player to see enemies through walls, highlights their patrol paths, and identifies useful objects in the environment. Traditionalists will be relieved to hear its usefulness is greatly reduced at higher difficulty levels.

Instinct Mode performs a couple of other functions, too. When Agent 47 is wearing a disguise he’s at risk of being spotted by people dressed the same way; so if he’s dressed as a generic henchman, the other generic henchmen will wonder why they don’t recognise him and become suspicious. But with Instinct Mode activated, Agent 47 raises a hand to his face, which is enough to throw NPCs off the scent. If you stop and think about it for too long it seems ridiculous, but from a gameplay perspective it works rather well.

The final use for Instinct Mode is to activate Point Shooting, which is Absolution’s take on Splinter Cell: Conviction’s Mark and Execute or, perhaps more accurately, Red Dead's Dead Eye. When enabled, time is near-paused, enabling multiple enemies to be tagged and dispatched. Unfortunately, the controls are needlessly fussy: the right bumper activates Instinct Mode, X enters Point Shooting, the left trigger zooms in, the right trigger marks enemies, then it's X again to take the shots.

Other changes are less significant. For instance, using the fiberwire is less fiddly than in previous games, hand-to-hand combat requires a three-button quicktime event, and when shooting Agent 47’s aim can be steadied by half-pulling the right trigger. The latter is a good idea in principle, but there’s little room for error and it's possible to fire by accident.

The guided tutorial draws to a close when Agent 47 completes his mission at Diana’s house. IO Interactive have gone to great lengths to emphasise their dedication to player choice in a ‘living, breathing world’ and the following hour or so of gameplay mostly supports their claim.

An early level in Chinatown is particularly rewarding. Your target is easily accessible, standing in the open on a bandstand. There are a multitude of ways to take him out. You can snipe him, poison him, or lure him away to a quiet alley for a spot of fiberwire fun. Discovering the more obscure possibilities represents an authentic Hitman experience. The improved Glacier 2 game engine impresses throughout. Despite the slightly misjudged lighting (overuse of bloom, lens flare, and so on - the usual nonsense), the graphics are wonderfully detailed and help bring locations to life.

The engine’s ‘crowd technology’ handles large groups of NPCs superbly. Some areas have upwards of 1,000 people wandering around and in that early section Chinatown is abuzz with activity. Incidental conversation is plentiful and the general hubbub of large crowds is extremely well-observed.

However, walking through densely populated areas can cause some slowdown. In the grand scheme of things it isn’t a big deal, but it does highlight a deeper issue about IO’s priorities for Absolution and the approach they’ve taken to level design.

Previous Hitman games revolved around a relatively small number of large sandbox levels, with one or more targets to assassinate. Absolution is instead broken down into 20 chapters, which are further subdivided into a total of 54 sections.

This is where the compromises are most apparent. A number of the sections are simply glorified corridors. There’s no-one specific to kill and nothing to do other than get to an exit point. As the game wears on these areas become more and more tedious. They feel like the filler between the traditional Hitman sandbox areas like Chinatown, of which there are far too few.

Even when those precious ‘open’ areas do crop up, they lack the sense of limitless possibility has always been the heart and soul of the series. Yes, there’s a degree of player choice. Yes, there’s a world to watch and AI behaviours to learn. Yes, there are ‘accidents’ to be orchestrated, bodies to be hidden, guards to distract.

But most of these areas are far too small, so the objectives are completed far too quickly. Spending so little time in each location means never gaining an intimate knowledge of the layout, which makes the whole experience less memorable.

Let’s contrast with the previous games for a moment. To this day I would be able to find my way around the backstage area of Blood Money’s Opera House where I swapped the prop gun for a real WWI pistol; or the sewers under Silent Assassin’s Kariv Park where I bombed the General’s car. I remember those places because I revisited those levels again and again, and tried every which way I could imagine to take out the targets. Three specific design choices stand between that kind of player behaviour and Absolution. Firstly, there’s the segmentation of chapters into smaller sections, which was presumably necessitated by technical or budgetary limitations (as evidenced by the slight slowdown in busier areas). Then there’s the checkpointing system that has replaced the quick saves of previous games. I have no idea why this decision was taken but when you’re required to replay half an hour just so you can experiment with some minor adjustments in how you approach the target, you’re probably not going to bother. In fact, on a few occasions when my cover was blown, I shot my way out of the level because I had no desire to replay from the last checkpoint. This would have been unthinkable in any other Hitman game. Finally, there is no option to customise Agent 47’s loadout going into a level, which cuts down dramatically on the options open to the player.

The story that the game is built around is a big part of the problem, too. Diana’s convinces Agent 47 to take a girl called Victoria into his care, but the assassin-with-child tale that follows is no Léon, that’s for sure.

Without Diana and the Agency, Agent 47 loses his quest-givers and as a consequence he is forced to make his own decisions. In practice, this means cramming an ill-conceived makeshift personality into that bald head of his, which goes some way towards undoing a character that’s been established for more than a decade. The central gag of the Hitman series is that a robot-like killing machine is doing his work in a world that oscillates between overblown parody and the surreal. By humanising Agent 47 in any way at all, this is lost.

A word too for the women of Absolution. If they’re not PVC-clad nuns then they’re strippers or prostitutes or hangers on or plot devices that exist for no more reason than to be killed in order to underline the baddie credentials of Agent 47’s enemies. Even young Victoria is little more than a helpless victim through most of the game. I’ll leave this line of criticism for those better qualified, but developers need to take this more seriously because it matters.

However, all is not lost. There's a glimpse of a real Hitman game buried in Absolution, and it can be found in the new Contracts Mode. Here you can play through a section as it appears in the main game, but with the ability to choose your own targets instead of those required in the campaign. Upon completing the level, you can save your actions and share the ‘contract’ with friends, or the world. You’re able to specify success criteria in quite a lot of detail, too. For instance, if you killed a chef with a wrench while dressed as a vicar (Cluedo, eat your heart out), you’ll be able to set all or any of those as win conditions on the level you create.

Here, all the noise is stripped away. It’s a purer Hitman experience. Playing through these user-created contracts is a blast, in equal measure frustrating and gratifying. You play in the knowledge that no matter how challenging the objectives are, it must be possible because the person who set it up played through it themselves. To encourage ongoing competition between players, you’re awarded points on each contract you complete based on meeting the criteria and your time.

It remains to be seen whether Contracts will be picked up by the community. I hope so, because it feels in some ways like the last sanctuary of the Hitman games I know and love. In part, this review sounds like an all-out attack, which it was never intended to be. I’m unashamedly writing as a huge fan of Hitman. A fan who has been looking forward to this release for years, a fan who was still excited after the first couple of hours, but a fan who recognises that ultimately this isn’t the game it should have been.

I am not suggesting that Absolution is no fun. It’s just not the same kind of fun that the series was built on. And once that becomes obvious, it’s hard not to let the negativity build. I’m writing this review while listening to the Blood Money OST and I’m reminded once again how sorely Jesper Kyd’s musical touch is missed in Absolution, along with much of the rest of the vibe and atmosphere. It's heartbreaking, in a way.

It's not a bad game, it's just not a Hitman game.

The long-awaited fifth entry to the Hitman franchise succeeds in some respects. It looks beautiful, the stealth is well-developed and Contracts mode is an inspired asynchronous multiplayer addition. But Absolution is less successful at being a Hitman game. By splitting chapters into smaller levels, much of the sense of discovery that underpinned the previous games has been undermined. What’s worse is that this appears to be done in order to accommodate a revamped game engine and a failed attempt at a story, which suggests a regrettable misunderstanding of the appeal of the original titles.