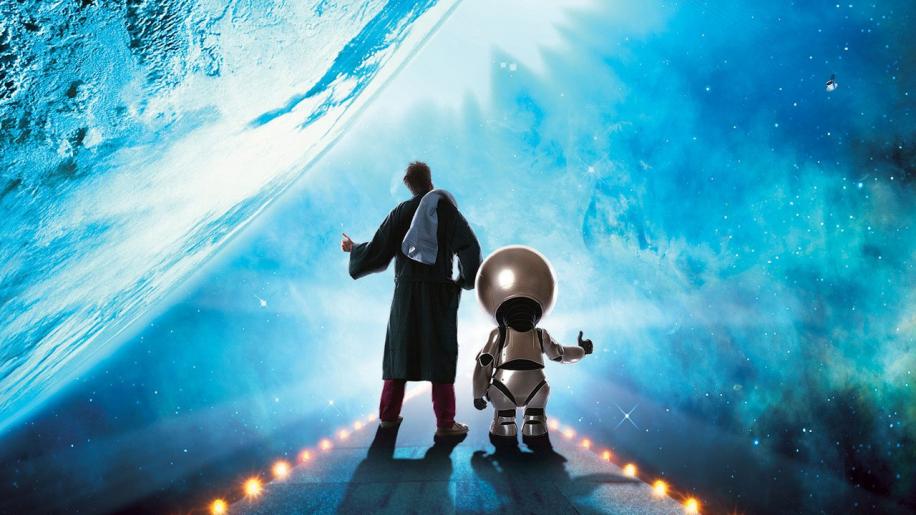 The Hitchhiker's Guide To The Galaxy is presented in a sparkling and broad 2.40:1 aspect ratio anamorphically enhanced widescreen transfer. The detail is exceptional, the intricate, imaginative sets that have been created looking simply fabulous, with clarity throughout, a little edge enhancement but no apparent grain. The colour scheme is broad and luscious, mainly because of the many exotic space locations (even the ships vary from looking like grimy sewers to looking like futuristic hospitals). The blacks are as solid as they get, allowing for decent shadowing and good contrast. It is a superb transfer - just what you need for such a intergalactic fantasy sci-fi.

There are two main audio tracks, a Dolby Digital 5.1 offering and a DTS mix. Both give us the dialogue at the forefront, ever clear and coherent - from the friendly advice of Stephen Fry's narrator to the readings of the Vogon poetry. The effects are vast and comprehensive, with everything from doors that sigh as your pass through them to laser shootouts, spaceships landing and crashing, icy winds blowing all around you and a bowl of petunias shattering to the ground somewhere behind you. The directionality is superb, with keen observation of every little detail to make you really feel like you're on one of a number of different spaceships or planets. The score is always suitable, engrossing you from start to finish in the fantasy adventure. It allows for very little bass, but that is made up for slightly by some of the more thunderous effects. Overall the DTS track, as is generally the case, has the edge, but there is not a great deal of difference between these two magnificent tracks. Aside from them we also get French and Spanish dubbed tracks should you so require them.

There are two Commentaries - the first with director Garth Jennings, producer Nick Goldsmith and actors Martin Freeman and Bill Nighy. It's quite a chirpy, amusing offering with them talking about Martin's choice of pyjamas, Mos Def's coolness, Zooey's eyes, the Glastonbury-like rain on some of the sets, Stephen Fry's intelligence, the effects used, the faithfulness to the original material, the bits Adams added and the almost unnoticeable cameos. Everything is light-hearted and amicable - and often pretty funny - but that often leads to long periods where very little of substance is offered. To add to that, there are a few pauses thrown in, but still - all in all - it's quite an entertaining commentary, particularly since it has so many contributors.

The second Commentary is with executive producer Robbie Stamp and Douglas Adams' colleague Sean Solle. They talk about sets, references to the original work and to Adams himself, often taking long pauses and not really offering very much depth to their contributions. This is definitely the drier of the two commentaries, with the chosen duo describing far too much that you can glean from just watching it yourself and far too few anecdotes and pieces of trivia. Die hard fans of the Guide will want to absorb all of the noted references but there is little of interest to the more general public.

The Making-Of Documentary runs at nine minutes in length, with the director talking about how daunting it was making a faithful representation of such a famous book, Martin Freeman discussing his role as the last man on Earth, a brief clip of the screen test between Martin and Zooey, interviews with most of the rest of the cast - including Sam Rockwell talking light-heartedly about how he merged several different personalities into one to create Zaphod, along with Mos Def, who seems even more stoned in interview than he seemed in the movie. They look briefly at the man behind Marvin the Robot and the creature design by Jim Henson's company, with some brief behind the scenes footage to boot. It is a nice, albeit unsatisfying production.

Then we have a single Additional Guide Entry, which is a hilarious sketch about the origins of the Babelfish, along with three Deleted Scenes - with more of Arthur and Ford talking about the Earth, some Vogon singing and a little more explanation behind the relationship between Zaphod and the Vice President. Then we have two 'Really' Deleted Scenes - intentional outtakes, like those on the Shaun of the Dead DVD, where we see Arthur, Ford and Zaphod storm the Vogon planet as if they were in Rambo and a brief moment with Arthur and Slarty which does not work quite as well.

Marvin's Hangman is bit of a gimmicky addition. It is just hangman with model of Marvin to dismember, each chosen letter resulting in a random phrase from the movie being uttered by the dejected robot. There is also an improbability drive option which jumps you to a random extra feature, whether it be a deleted scene or a part of the featurette. Again, it's a little gimmicky, but this time it is totally in line with Adams' crazy imagination. Moreover there are some Easter Eggs, which I could only find by pressing the improbablility drive option repeatedly. These include hidden TV footage of what Deep Thought was viewing.

Finally there are a few trailers that are skippable on startup and can be played through the menu, advertising the new Jodie Foster thriller Flightplan, the new Big Screen interpretation of the Chronicles of Nadia, yet another U.S. remake of a perfectly good Japanese horror film, Dark Water, starring Jennifer Connelly and the acclaimed new TV series, Lost. There are also some trailers for the less well known titles, Aliens of the Deep, Chicken Little and Beautiful People along with a general trailer for TV shows on DVD.

The Hitchhiker's Guide to the Galaxy is a great big fun adventure - one of the most surreal visions to have graced our screens since Monty Python. With a well-chosen cast and some surprisingly good performances, along with a superb visual realisation of excellent source material I can certainly see how this will make the first successful chapter in a lucrative franchise. The video representation on this disc is brilliant and the two main audio tracks are solid, but the wealth of equally imaginative extra features brought together on a menu that deserves credit unto itself really makes this purchase a fanboy's dream. Newcomers should not hesitate at a rental and fans of Adams' work or of similarly surreal comedic material are not going to be disappointed if they make it an impulse buy.