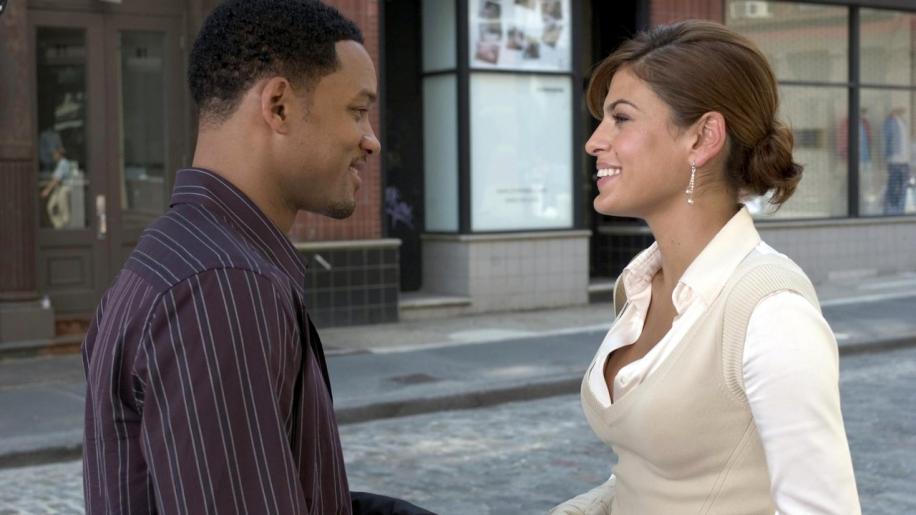 Who would have thought that the Fresh Prince would have come so far? Shirking off his small-screen roots with aplomb, he gave us some great no-brain action movies like Bad Boys, progressing on to commanding lead roles in serious dramas like Ali, but although most of his films play to his strengths by having a comic edge, Hitch marks his first true foray into the realms of romantic comedy.

Alex Hitchins is an anonymous matchmaker whose talents are hired to get together some of the most unlikely couples. He teaches the clumsy to glide like swans and turns the socially inept into adorable charmers. His pitch is to give two people a fighting chance at that one moment which makes or breaks a romance, but when his latest client sets his sights quite high, Hitch finds that he has his work cut out for him. You see, portly accountant Albert lusts after one of his company's clients - a celebrity model called Allegra. Unable to eat without staining his clothes or wash his hands without splashing water over his trousers, even Albert's dancing draws comparison to David Brent from The Office and Hitch has to pull out all of the stops to make the impossible possible. In the midst of this desperate shot of cupid's arrow he also finds unlikely romance himself with an extremely independent and thoroughly cynical journalist who, unaware of Alex Hitchins' alter ego and real day job, is herself determined to catch the elusive love doctor and expose him.

Will Smith is an affable, charming actor who easily has the presence to command a sweet little fluffy romantic comedy like Hitch. He seems naturally convincing as the self-professed love doctor, although his mistakes are often just as entertaining as all the things he does that make him look so cool. That said, in a romance, no amount of charm could make up for a poor choice of romantic partner. Thankfully that is not a problem here because he is paired with the lovely Eva Mendes, an actress who has shown that she can carry off a role in a solid thriller like Out of Sight with the same ease as she exhibits in vapid nonsense like that pointless Fast and the Furious sequel. Sure she does not have stretch her abilities any more than Will Smith here but at least she is on good form and the two of them have fantastic chemistry.

Unfortunately the same cannot really be said for Smith and his co-actor, the relatively unknown Kevin James, who plays the hapless lovelorn Albert. Although the two do manage to collaborate well for a couple of scenes, they are generally better working independently and I did not find any convincing camaraderie between them. I guess that the trouble is that Smith is playing it so cool that he cannot help but seem like he is looking down at the clumsy Albert, who is himself the underdog that we are clearly supposed to relate to and root for. These two just don't seem to be on a level playing field. Still, when all is said and done, Kevin James does prove reasonably funny in his scenes and at least has chemistry with his respective love interest, Allegra, a limited role played adequately by Amber Valetta, a model herself.

Hitch is quite a sweet, warm romantic comedy that pushes all of the right buttons but adds nothing particularly original to the genre. It's directed stylishly and has a well-chosen soundtrack, with charming actors and a witty script, but despite all of that there is simply nothing new on offer here. Still, it is a perfect date movie, a standard 'chick-flick' which even boasts a few bits of interest for the boys out there. Smith has done better, but I guess he could do a lot worse.