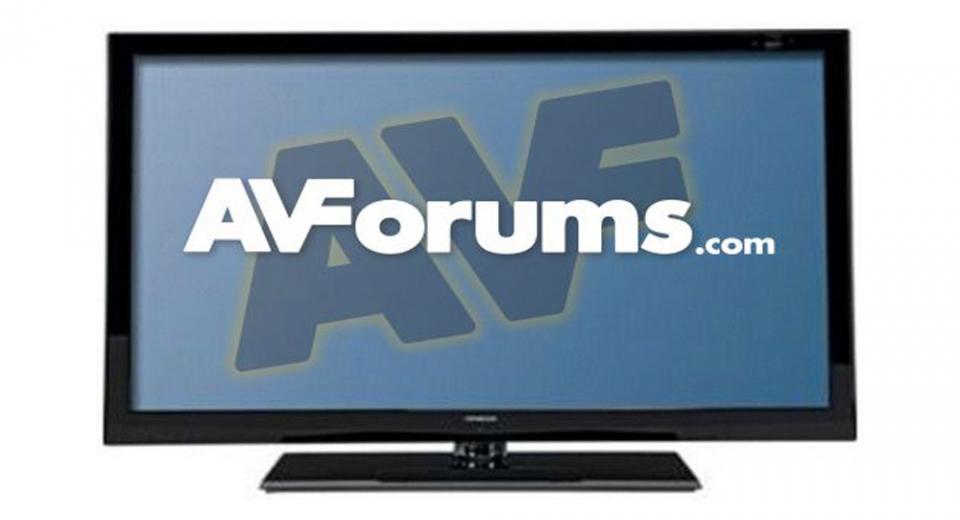 The latest TV we’ve plucked for you from the Argos catalogue comes in the shape of the Hitachi LV46VF04ULD, a rather contemporary looking 46" LED model. Hitachi isn’t an Argos owned brand, like Bush and Alba, but the vast majority of their TVs are sold through the retailer. Like almost all sectors of the LED TV, the 46" one is highly competitive and for around the same ticket price of the LV46VF04, one could consider competing models from Samsung, in the UE46EH5000, Toshiba’s 46SL863 or the Finlux 46S6030T that we reviewed and recommended back in July 2012. The Hitachi LV46VF04ULD certainly has a fight on its hands, we’ll see if it’s up to the challenge.

The Hitachi LV46VF04 sports a plain and simple design of pure gloss black, all around, and we’ve no problem with that. Despite the lack of any real design touches, it does manage to achieve a modern look with the slender bezel and a chassis that is less than 4cm deep. The remote control is an almost exact facsimile of that we saw with the Alba LCD32947HD we recently covered, with its sloped ends and buttons that can be difficult to read in low light; it’s very lightweight but nice to handle and reasonably well laid out – we would have preferred the OK Button to have been located in the centre of the directional keys but it’s a minor complaint. Around the back the LV46 has connections for 2 HDMI devices, 2 Scart, singular component and composite video inputs – with left and right audio inputs – a VGA PC port and the aerial socket. To the side there are 2 USB ports, a CAM slot – for premium digital services, a headphone jack and the accompanying audio input for the VGA PC video connection. It’s certainly a reasonable set of connections and likely to keep the target market happy.

The Menus are split into 6 areas – Picture, Sound, Settings, Install and Retune, Channel List and Media Browser. As ever, we’ll concentrate on the Picture Menu. The Hitachi LV46VF04ULD offers a choice of 3 Picture Modes from the internal tuner – Dynamic, Natural and Movie – and adds a Game Mode from external inputs. There are the standard ‘front-panel’ controls of Contrast, Brightness and Colour as well as options for Low, Medium, High and Auto for the Backlight intensity. Moving in to the Advanced Picture Settings and we have options for, Colour Temp (Cool/Normal/Warm), Picture Zoom, Film Mode, HDMI True Black and Colour Shift which is really a tint control. We’ll check whether the Film Mode works later on in the Video Processing section on the Test Results page.

As with almost all of the Vestel based TVs we’ve covered, there isn’t a lot in terms of features to speak of. There’s a very limited media player available through the USB port but out of the many files we tried to play, we could only get consistent success with jpeg (photo) and mp3 (music) files. Trying to get videos to play was an exercise in frustration and we wouldn’t recommend it for that purpose. From news emerging form IFA 2012, it would seem Vestel are taking action in the Smart TV arena with a number of partnerships announced so we’d expect more to come, in this department, in the near future.

Despite the almost complete absence of calibration controls, the Hitachi LV46VF04ULD still took a fair amount of time to achieve best set up. All the basic controls interact heavily with one another, meaning a change in the Contrast or, more unusually, the Colour control would necessitate a change to the Brightness or vice versa, which doesn’t make it easy to get the right balance. Moreover, making all the picture detail visible to just above video black, brought an unbearably red tint to the blacks so we elected to crush the bottom 5% of the greyscale to achieve a more watchable picture. Sometimes compromises just have to be made and another was with peak light output; usually we would aim for around 120 cd/m2, for a moderately lit room, but we couldn’t bring it down anywhere near that low, even with the Backlight setting at Minimum level. Annoyances aside, the greyscale was now quite dramatically improved with just a feint green cast disturbing the neutrality and colour reproduction was now much closer to the HDTV Rec.709 standard, with only (a rather greenish) yellow tipping over the overall Delta Error threshold of 3 where it’s perceptible to the human eye. We don’t mind the lack of White Balance controls – we wouldn’t expect any – and the fact there’s no Colour Management System on-board is even less of a surprise but we would expect the basics to work properly and there are some issues there. Clearly there is some disparity in the panels Vestel use to assemble the TVs for the various brands. We’ve seen some excellent, mediocre and downright poor results in this area of testing and the Hitachi LV46VF04 fits somewhere between the latter two. In fairness, the TV did deal with ambient light quite well, so the averaged Black Level derived from the ANSI Checkerboard Pattern – used to check intra-frame contrast – of 0.2 cd/m2 isn’t necessarily representative of how it will look in the average living room, but it's still toward the bottom of the scale in terms of dynamic range. The less useful On/Off Contrast test gave a staggering figure of 45,520:1 thanks to the fact the panel automatically shuts down when no signal is received. The ANSI Contrast of 877:1 is certainly more representative but that’s helped along somewhat by the excessive peak brightness of 176cd/m2 that we were unable to get any lower without destroying the picture quality.

Most of the Vestel TVs have shown some weaknesses when fed a 1080p24 signal which means Blu-ray discs are not being shown at their best. The Hitachi LV46VF04 continued this unhappy trend and when fed the torturous wedge pattern from the excellent Spears and Munsil disc, displayed a lot of moire and artefacting. Translated in to real world content, this meant a fair amount of break-up of objects during movement and the odd skipped frame. To be fair, most would likely sit through a disc in blissful ignorance but once you see it, it can’t be unseen. Scaling of standard definition signals was decent and the LV46 displayed clean scaling of 576i signals and also managed to pass the 2:2 cadence detection tests; meaning standard definition television and DVD’s are well. Deinterlacing performance was fairly mediocre with jaggies being visible in the mid portions of both jaggies test, meaning content sent in an interlaced signal would see noticeable degradation with fine detail losing resolution under movement.

A happier trait of the Vestel displays is that they mostly display a low input latency. Our device measured numbers between 26 and 29 milliseconds delay between controller input and reaction on-screen which is impressive. The console gamers out there should certainly be kept happy by the LV46F04 as those figures represent a latency of less than one frame for the typical game. Panel response is apparently not quite so impressive and we could see some ghosting in high contrast sections of games.

Undoubtedly the most impressive element of the Hitachi LV46VF04’s picture make up lay in its fairly accurate colour palette, giving outdoor scenes a good degree of believability with convincing skyscapes and grassland. The slightly uneven greyscale could, at times, give an unnatural look to images with an overemphasis on the brighter parts of skin-tones and a touch of green around the gills but, overall, it was quite watchable for some casual viewing.

We certainly wouldn't be placing the Hitachi at pride of place in our main viewing room, however, as the disappointing dynamic range doesn’t really lend itself favourably to dimmer conditions. Motion resolution is average and horizontal panel array banding is visible under certain conditions, generally involving large patches of colour in panning shots, so we weren’t that enamoured for sports viewing either. General panel uniformity is actually quite good but viewing angles are compromised by tinted blacks and loss of contrast.

Even in its dimmest mode, with the most conservative of backlight and contrast settings, the Hitachi LV46VF04ULD gives out a lot of light and possesses a decent filter so we’d see its ideal situation as being in a bright room where little critical viewing is carried out.

There’s nothing really remarkable about the down-firing speakers inside the Hitachi, which is probably a good thing as audio observations when it comes to very slender TVs tend to be of the negative variety. Provided they aren’t pushed too hard, dialogue is clearly audible but we wouldn’t recommend it as a music player and, if you’re serious about audio, even a cheap external solution would be an improvement.

The Hitachi LV46VF04ULD features a plain gloss black design that manages to look contemporary by virtue of the slimline bezel and chassis. The remote control is quite funkily designed but the print on the buttons could be easier to read in low light. Feature-wise there isn’t really much to write home about, the LV46 will play some media files via one of its USB ports but we’d recommend avoiding the video player at all costs. The Hitachi’s menu systems are well designed and speedy to navigate, although the basic picture controls have far too much influence on one another and, despite the lack of advanced calibration controls, setting up the TV wasn’t the simple feat it should have been.

Once we’d achieved a best setup scenario, images were possessed of a natural and convincing colour palette but the uneven luminance and slight green cast could intrude. Standard definition content was handled quite nicely but the Vestel engineers’ continued inability to provide decent 1080p24 processing will not curry favour with Blu-ray fans. Contrast and black levels were definite weak points and the often noticeable panel banding did impinge upon the immersion factor; general light dispersion from the edge mounted LEDs was quite creditable, however, and there was little in the way of clouding to note.

In the final analysis the Hitachi LV46VF04ULD doesn’t particularly distinguish itself in any critical areas, other than managing to look quite contemporary and making a great choice for the lag conscious gamer. A few years back we would have marvelled at the thought of a 46 inch 1080p display being available for around £500 but these days competition is mightily fierce and at least the basics have to be in place which, alas, in this case they aren’t.