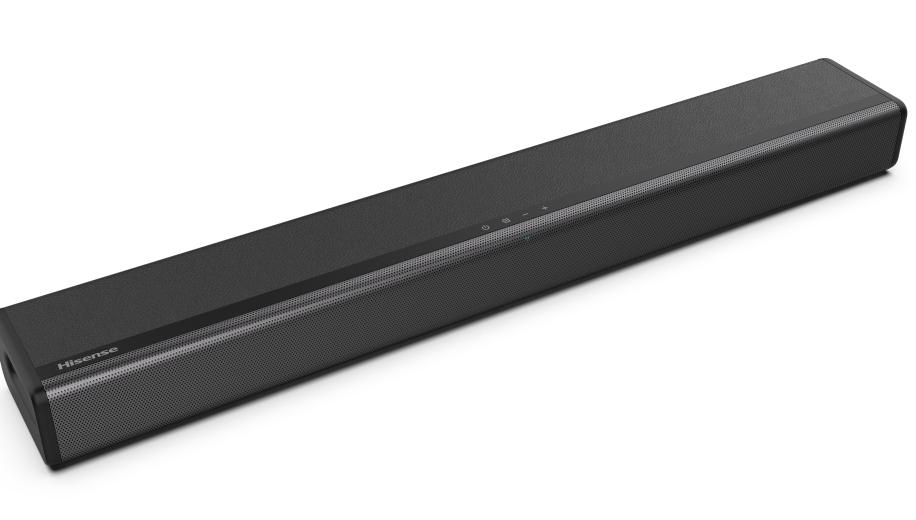 The Hisense HS214 is a capable, compact, and competitively priced all-in-one soundbar. It's nicely designed, is well made, has a decent remote and includes everything you need to quickly and easily connect with your TV. It sounds bigger than it looks, creates a surprising amount of bass, and offers a very affordable route to upgrading the sound on TVs with screen sizes up to 55 inches.

The not so good

The Hisense HS214 is an all-in-one soundbar, and represents the Chinese giant's first foray into this lucrative market (in the UK at least). Hisense has wisely decided to keep things simple with its initial offering, concentrating on overall performance and competitive pricing.

The HS214 uses a compact design, with a built-in subwoofer. There's HDMI-ARC and Bluetooth connectivity, along with support for Dolby Digital, and three sound modes. It's clearly designed as a simple plug-and-play solution, upgrading the sound on TVs with screen sizes up to 55 inches.

The pricing is very competitive, with the HS214 costing around £99 as at the time of writing (October 2021). While this compact soundbar is obviously built to a sub-£100 price point, if it can deliver in terms of performance it might make an affordable and easy way to improve your TV audio.

The Hisense HS214 certainly doesn't deviate from the standard all-in-one soundbar design, with a simple but reasonably well-made cabinet that's finished in black. There's a mesh grille along the front, with the speakers and a series of LED indicators behind, touch sensitive controls along the top, and ports at the side. There's also a woofer built into the bottom, and it's only here where the finish looked a bit sloppy (although it didn't affect the performance). The HS214 measures 650 x 58 x 95mm (WxHxD), and weighs in at 2.17kg.

There are two screw holes at the rear for those who want to wall mount the HS214, along with a recess to the left (as you face the soundbar) for the connections, and a recess on the right for the two-pin power cable. The touch sensitive controls handle power on/off, input selection, and volume up/down, plus there's a removable sticker that shows what the different coloured LEDs indicate.

The included remote control is pretty good for a soundbar at this price point, it's comfortable to hold, and has all the necessary keys laid out in a sensible fashion. You can power on and off, mute the volume, change the volume, switch between sound modes, choose sources, dim the display, adjust the bass, play /pause and skip, select the surround mode, and pair with Bluetooth devices.

The connections are fairly standard for a budget soundbar, but include everything you need to quickly and easily upgrade your TV's sound quality. There's an HDMI-ARC connector, which not only sends audio back from the TV, but also provides basic control using the TV's remote.

The design is simple, the remote is effective, and the connections sufficient to quickly get you up and running

If your TV doesn't support ARC, there's an optical digital input, and even a coaxial digital input, which is fairly rare these days. Finally, there's a 3.5mm auxiliary jack, and a USB port for firmware updates and music playback. While there's no Wi-Fi, the HS214 does include Bluetooth 4.2.

The Hisense HS214 is a 2.1-channel all-in-one soundbar based around two front-firing full-range 44x100mm drivers with 8 ohms impedance, and a downward-firing 3-inch woofer mounted in the base of the cabinet, which also has an impedance of 8 ohms. In addition, there are ports at either end, to give the compact soundbar a wider front soundstage. There's 27W of amplification applied to each of the drivers, and 54W allocated to the woofer, giving the system 108W of Class D power.

The HS214 supports Dolby Digital, along with 2-channel and multi-channel PCM, but there's no DTS decoding. In terms of file support, the Hisense can handle WAV (48K), WMA, MP3 and FLAC. There's also a virtual surround enhancement, and three sound modes: Movie, Music, and News.

Finally, there are a few handy accessories in the box, including the manual, a quick setup guide, wall mount spacers, a wall mount guide, an HDMI cable, an optical digital cable, a power cable and two AAA batteries for the remote. That's impressive for a soundbar that costs less than £100.

The Hisense HS214 is simple to set-up, just place it under your TV and connect the two via HDMI using the provided cable. If your TV doesn't support HDMI-ARC, then use the included optical digital cable instead. For those who would rather wall mount, there are keyholes at the back, and Hisense includes spacers and a template to make the process as straightforward as possible.

There's no Wi-Fi to worry about, but Bluetooth pairing is very easy – although Hisense doesn't appear to offer a Bluetooth remote app. We tested the HS214 in conjunction with an LG 55B7 OLED TV, with everything connected to the TV and the audio sent back via ARC. We also paired the soundbar with an Apple iPhone X to test the Bluetooth capabilities.

The Hisense HS214 might be simple in terms of its design and features, but that provides the Chinese manufacturer with an opportunity to concentrate on delivering decent sound quality at an affordable price. The two forward-firing full-range speakers and downward-firing woofer create a soundstage that certainly feels bigger than you'd expect from such a compact cabinet. It also has a decent amount of amplification, and while not really suited to larger rooms, this soundbar is ideal for smaller rooms and TVs with screen sizes up to 55 inches.

The result is a performance that has a pleasing sense of scale, and a surprising a mount of bass. The delivery is fairly detailed, with the full-range drivers producing a well-defined mid-range that is both clean and un-congested. The higher frequencies are also fairly well handled, although the treble isn't as precise as it would be if the HS214 used separate tweeters and mid-range drivers.

The built-in woofer also does its part, adding some nice low-end presence to support the rest of the system. It obviously doesn't go as deep as a separate subwoofer, but place the soundbar on a solid surface and adjust the bass level, and the HS214 might surprise you. Just resist the temptation to push the bass setting too high, or the woofer will over-power the rest of the system.

The solid overall performance produces a soundstage with good mid-range, some width and a surprising amount of bass

The front soundstage produces some solid stereo separation, allowing for the fact that the drivers are not that far apart, while the side ports help give the delivery a bit more width. Despite the lack of a dedicated centre speaker, dialogue always remains clear and focused on the screen, which means this soundbar can handle most programming with ease.

The HS214 proves to be a decent all-rounder, handling TV shows, movies, music and games with the same solid competency. As long as you don't push the volume too high (and why should you), and you don't go mad with the bass setting, you'll be rewarded with a well balanced and capable 2.1-channel system that sounds great no matter what you're watching.

The Movie, Music and News sound modes are all fairly self-explanatory. The Movie mode applies the virtual surround enhancement (which can also be selected independently), which gives the sound a greater sense of space, but at the expensive of some focus. The News mode emphasises dialogue, handy if you're struggling to understand something, while the Music mode defaults to a straight two-channel delivery. This tended to be our preferred mode for most content.

The Hisense HS214 isn't going to set the world on fire, but as a first effort from the Chinese manufacturer it's to be commended. Hisense wisely keeps the features to a minimum, which in turn keeps the cost down, but the HS214 includes everything you need to instantly upgrade your TV's sound quality. The general lack of complexity ensures set-up is simple, with everything you need in the box, and the effective remote makes controlling the soundbar very intuitive.

Since Hisense has primarily concentrated on filling the compact cabinet with decent speakers and amplification, the result is a solid sonic performance. The two forward-firing drivers create a decent front soundstage, while the built-in woofer adds some solid bass underneath. Dialogue remains clear, despite the lack of a dedicated centre speaker, and stereo separation is fairly good as well. There are also some handy sound modes, and even a virtual surround enhancement.

As long as you don't expect miracles, the HS214 won't disappoint. It can't support DTS, lacks Wi-Fi, and doesn't use a separate subwoofer, but you can't expect everything for under £100. The reality is that the Hisense HS214 is a very affordable sonic upgrade that will almost certainly sound better than the speakers built into your TV, and thus it comes recommended.

There isn't a massive amount of quality competition in the sub-£100 price bracket, which makes Hisense's achievement all the more impressive, but if you're looking for a good all-in-one system the Yamaha SR-C20A is impressive – although it's also twice the price.

The SR-C20A uses a 2.1-channel system with a very similar speaker layout to the HS214 that's based around a pair of full-range drivers and a woofer. There's also a similar amount of amplification, although Yamaha adds a pair of passive radiators for slightly better bass response.

The Yamaha's design and build quality is slightly better as well, although the Hisense has a nicer remote control. The overall features and set-up are equally similar, but while the SR-C20A doesn't have Wi-Fi either, it does support an excellent Bluetooth remote app.

In terms of overall performance the Yamaha has the edge, with a delivery that's more refined, and it also supports DTS. But in most other respects the two are very similar, and at half the price the Hisense HS214 is certainly great value for money.